I went up to Burlington to learn all about the new Ben & Jerry's vegan ice cream and even got to develop a custom flavor, just for kicks! Here's the scoop. 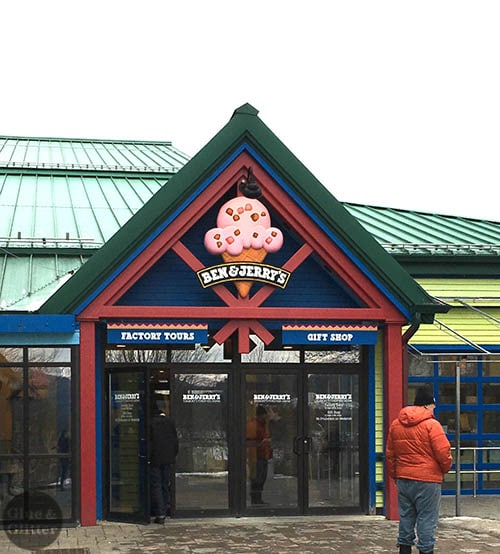 The press trip was all about drumming up interest in the new Ben & Jerry's vegan ice cream, and if your reactions on Instagram were any indication: success! Thank you guys so much for asking questions and sharing your opinions. We talked a lot with the Ben & Jerry's staff, and I tried to pass along all of your feedback. Below, I'll answer the top two questions you guys asked, but I wanted to talk a little bit about my favorite parts of the trip.

One of the highlights of this trip for me was getting to connect with so many amazing vegan food bloggers. There were a few who I was following before the trip, and I'm so grateful for the new folks that I met, too! I finally got to have a drink and chat with Cadry from Cadry's Kitchen and meet Rika and Doni from Vegan Miam in person. One of my new favorite bloggers - Jenné from Sweet Potato Soul - was there, and I went full on fangirl on her. The new-to-me bloggers were Melissa from My Whole Food Life, Madeline from A Graduated Kitchen, Carlo and Carmella from The Food Duo, and Hannah from Bittersweet. I highly recommend following all of these amazing people. You won't be sorry! 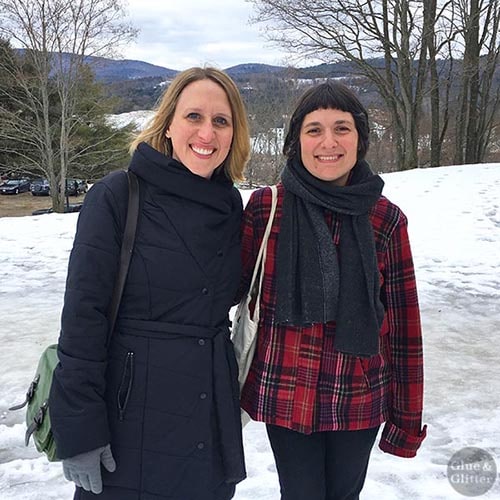 It was so delightful to meet Cadry Nelson in person! We've known each other through blogging for years, and it really was like meeting up with an old friend.

Obviously, the part I was most looking forward to in advance was actually eating Ben & Jerry's vegan ice cream. The Coffee Caramel Fudge and PB & Cookies were hands-down my favorites. If I had to choose a favorite favorite, it would be the coffee. It had the perfect amount of creamy caramel that pulled just like caramel should, and it was chock full of chocolate chips. The PB & Cookies was probably the favorite among everyone in the room, and it is stellar. Crunchy sandwich cookies and salty peanut butter in that creamy vanilla base is stellar. 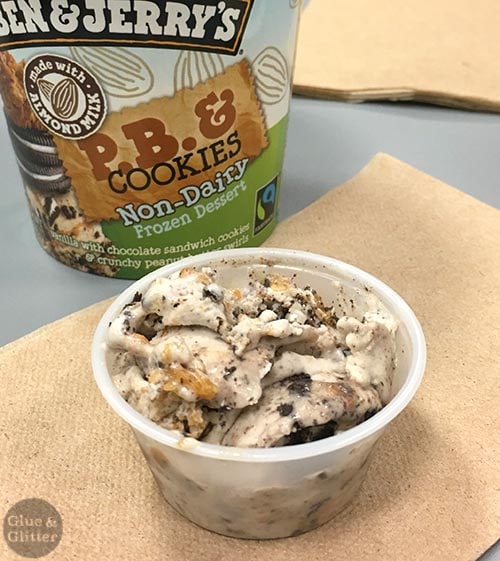 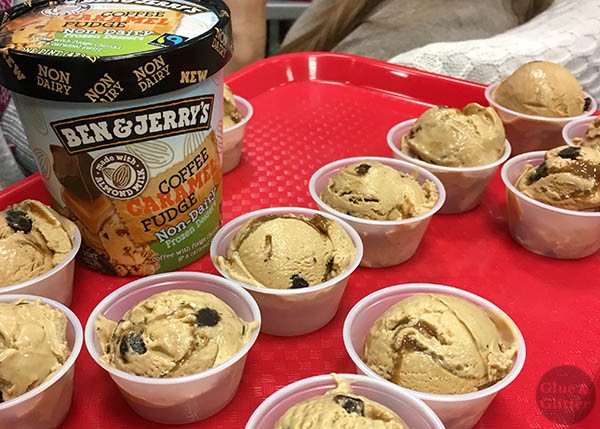 Later that day, we got to develop a custom flavor, just for kicks. We broke into groups and their flavor experts, Kirsten Schimoler and Paul Szalkucki, coached us through creating an eight-pint batch of ice cream. In some ways, it was a lot like developing a cocktail recipe, but in others it was very different. In all ways, it was a total blast. 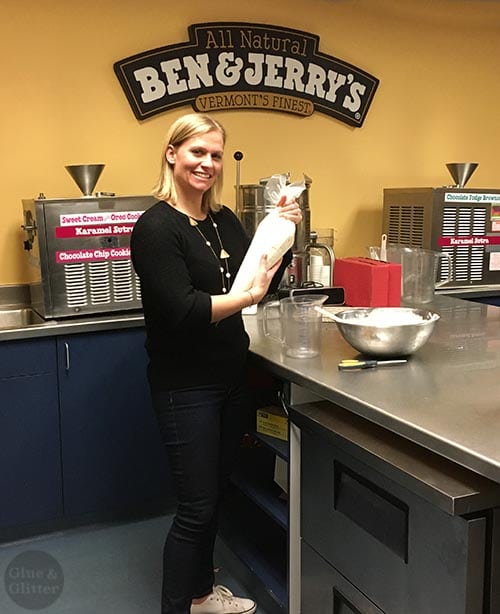 At that quantity, you are weighing ingredients on a scale, not scooping up tablespoons. That makes adjusting trickier. And the flavors change a lot during the freezing process. It was definitely a learning experience, and we weren't even developing the base – that's what Kirsten has spent the last 18 months doing.

I was teamed up with Jane Maynard from This Week for Dinner, and we concocted a chipotle-almond ice cream with chile-roasted pepitas, vegan fudge brownies, and a chocolate cookie swirl. I felt lucky to get paired up with a fellow spice-o-holic. Our ice cream was packed with spicy, creamy, salty, crunchy, fudgy goodness. Everything we dreamed it would be! 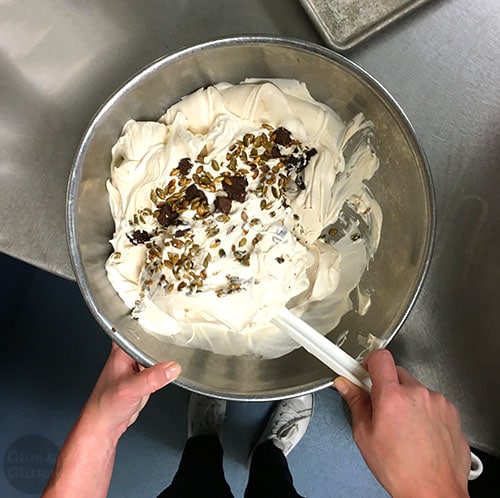 This is our ice cream, getting ready for the freezer. Look at those pretty pepitas! 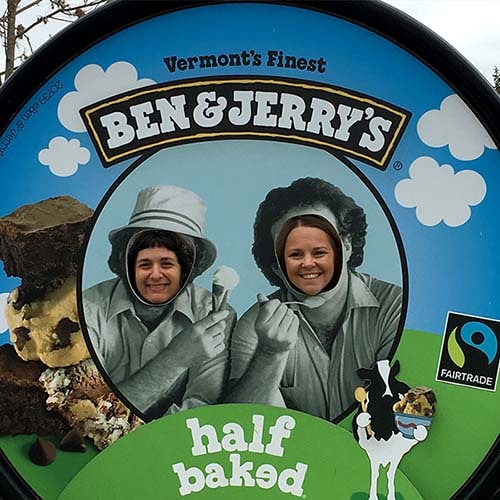 Me and Jane at the Waterbury facility. She gets me.

On top of the party time, there were lots of chances to learn and ask questions about the Ben & Jerry's vegan ice cream and the company as a whole. A bunch of you sent me questions in advance, and they really fell into two main categories:

1. Why did Ben & Jerry's choose almond as the base, and when will a nut-free flavor be available?

They were really open about the nut-free question, and what it comes down to is demand for the vegan line overall. First, they need to confirm that the demand for vegan ice cream is truly there at this scale, and then they'll get down to developing new flavors and possibly new bases.

Kirsten explained that to create their vegan flavor, they had to choose a versatile base that paired well with their mix ins, and almond ended up being the one that fit best. They could have gone with coconut milk, but coconut has a strong flavor, unless you want to use chemical add-ins to mask the coconut taste. They didn't want to do that.

Their almond mix is a combination of almond milk, coconut oil, and pea protein, and it took months to nail down the ratio. Kirsten said that the first few batches she tried were so terrible that she didn't even let anyone else try them.

It took 18 months to get these flavors together, so even if they start tomorrow, nut free is not in the near future, but it's definitely on their radar. 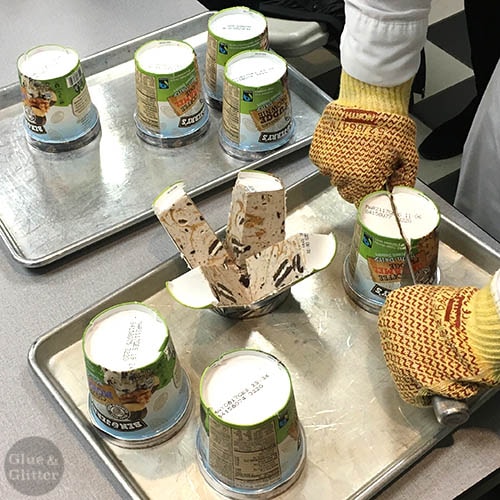 Ever wondered what the inside of a pint looks like? This is part of their quality control process. Every 90 minutes, they slice open a pint to make sure everything's cool. They put the ice cream into the break room for the factory staff and compost what doesn't get eaten.

I wanted to talk a little bit about that timeline, because I think a common misconception about how flavor development happens at Ben & Jerry's is one that folks have about recipe development in general.

One of the most common frustrations among the recipe bloggers I know is the perception that what we do is easy. I'm a firm believer that anyone can cook, but cooking is a different thing from developing a recipe from scratch. It takes me at least a handful tries to get most new recipes right, and some took years to truly nail down. I'm not the exception – that's just how developing a truly tasty recipe from scratch works. It turns out that developing a new ice cream completely from scratch for mass distribution is similar to that process, but on steroids.

From what I gathered, they'll have pints at all of their scoop shops in April, and they'll be scooping the PB & Cookie at every scoop shop in April, as well. The pints are at some retailers in some places now, and they should be available everywhere by summer, which is their busy season. 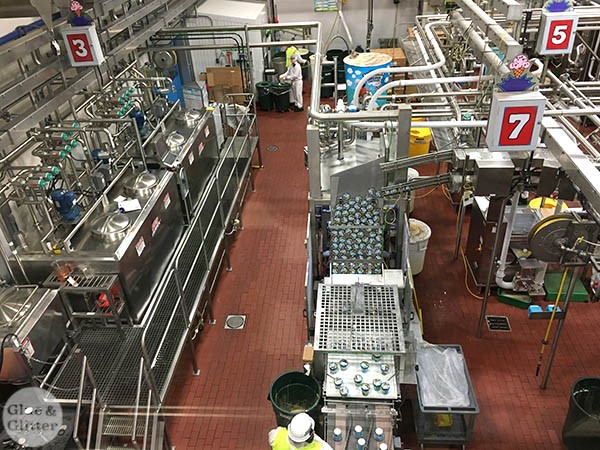 They let us take pictures of the factory floor. Their pint-packing process is mesmerizing to watch!

For folks in other countries, it will take a little bit more time. The ice cream they sell overseas isn't produced here, so they need to outfit their factory in Hellendoorn, Norway to make the non-dairy flavors. The good news is that they did most of the hard work - testing, trial and error learning, etc - here, so it won't take quite as long as it did this first time. The folks who got non-dairy up and running here will head to Hellendoorn to spin things up when the time comes.

Just like with the nut free flavors, if/when their vegan ice cream goes overseas is about how Ben & Jerry's vegan ice cream performs in the U.S. They need to make sure they're selling pints, and then they'll look at getting the Hellendorn facility ready to roll out the almond milk goodness.

A Quick Wrap-Up, in Which I Get Sappy

What really struck me about our time visiting the headquarters and their factory in Waterbury, VT was how kind and how transparent everyone that worked there was. They were not afraid to answer our questions honestly, and they didn't try to hide anything. They knew that a bunch of vegan bloggers would be uncomfortable with the dairy side of their operation, and they were sensitive to that without making us feel like they were trying to downplay what they do. 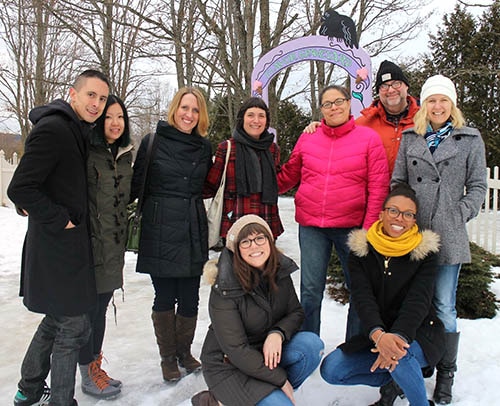 The whole trip was really made of magic. It was such a joy to connect with other food writers in real life, some of whom I've followed for years. Everyone there was so sweet and funny. In between learning and activities, we ate, drank, and laughed until our cheeks hurt. I'm definitely still adjusting back to the weird world where I'm not surrounded by these amazing people and eating ice cream every 45 minutes on the dot. My life is hard, y'all.