Ta-co night! Ta-co night! I love a taco night, and I bet that you do, too. These broccoli tacos are fun and 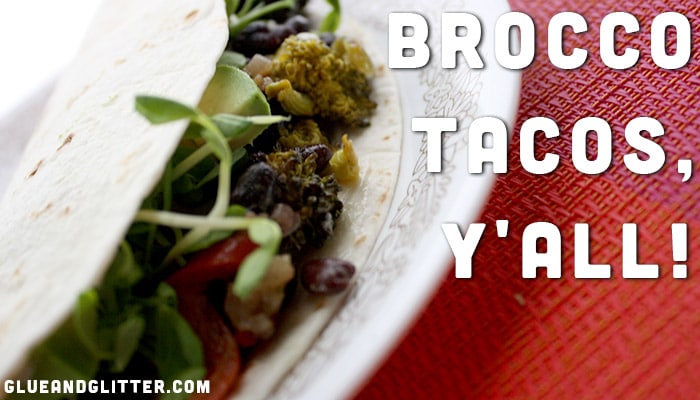 "Wait," you may be saying, "Didn't you just make tacodillas last week?" I did! part of my philosophy is that eating vegan doesn't have to be hard or expensive, and reusing ingredients is one of the ways that I save money on groceries. So, when I had leftover tortillas from eating as many massaman curry tacodillas as I could stuff into my face, I decided to use the rest for broccoli tacos.

Besides, after seeing Lazy Smurf's Taco Cleanse, I'm kind of obsessed with tacos!

When we do taco night around here, I like to go build-your-own style. I put all of the ingredients out, and Dave and I pile them into our tortillas. For these broccoli tacos I picked up some yummy pea shoots and a ripe avocado, and I always put out Vegenaise or vegan sour cream, if I have it in the house. Vegenaise on a taco might sound a little gross, but just a little bit makes it really extra tasty. 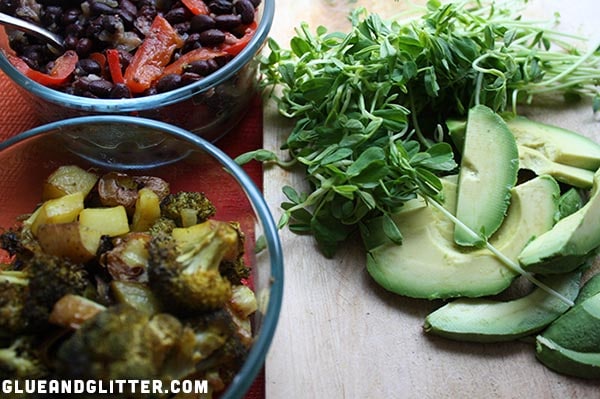 At first glance, these broccoli tacos might be looking like they involve a lot of cooking, but they come together pretty quickly. While the veggies roast up in the oven, you can prep and cook the beans. It all timed out beautifully for me!

This makes plenty of beans and veggies, so you could probably stretch this to feed three of four people, if you wanted!