I'm super thrilled that my cashew carrot mac recipe is kicking off the Canned Time Nut Butter Bash! Each month this year, Angela is going to feature awesome nut- and seed-butter recipes. It's an honor to be the first blog on this adventure. 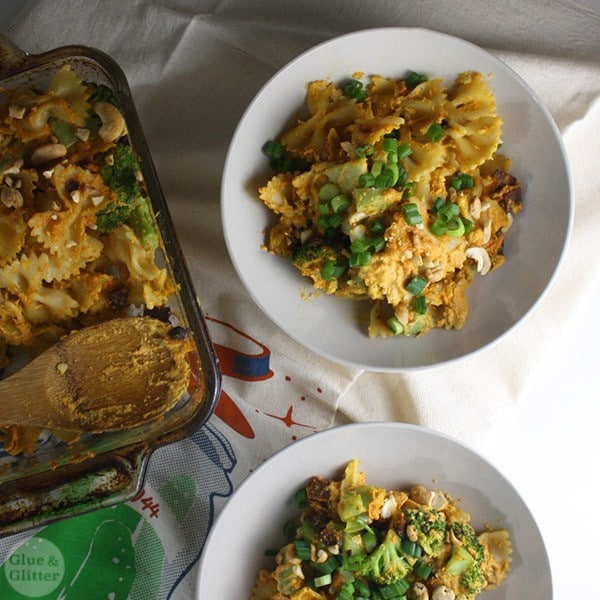 Pasta of your choice, covered in a creamy, cheesy sauce and loaded with bacon, broccoli, and green onion goodness.

I know: the pasta in the picture isn't mac, but let's be real, you guys. The shape of the pasta is not the important thing when you're making this dish. What's important is that it's covered in a creamy, cheesy sauce and loaded with bacon, broccoli, and green onion goodness. I made this recipe with farfalle, because Darrol Henry refuses to eat bowtie pasta, and I was pretty sure that he'd get over his shape-ism if I covered it in cheesy sauce. 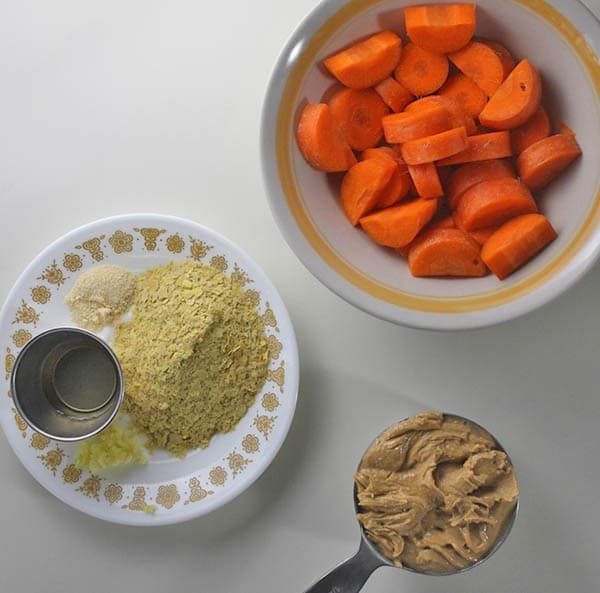 I was right. Though he did pick out most of the broccoli.

Darrol Henry and his best friend have both decided that napping is for suckers. Every kid drops his nap at some point, but these guys did it a lot earlier than most, and it kind of took me and his buddy's mom by surprise. She and I both work from home, so nap time for them is our time to crank out assignments.

Panic ensued, and then my friend suggested that we start swapping afternoons. Cue angels singing, y'all. It's been amazing. Once a week, Darrol heads to his best friend's house to party and eat supper while I work. Once a week, I take the boys for the evening, so my friend can get her stuff done. It's great! And it's been a lot of fun planning toddler meals for them.

The first couple of times that we swapped, I went the lazy route and served them Earth Balance Mac with peas mixed in, and they LOVED it. Mac and peas was suddenly Darrol's favorite thing, but I didn't want to make a processed food like that a regular meal for him.

The other night, Darrol asked for "pasta and peas" again, and I scrounged through the pantry for ingredients. My cheese sauce recipe is sort of a mash-up of the carrot-potato cheese that's so hip right now and more traditional nut-based vegan cheese. It uses cashew butter instead of potatoes for creaminess. I also loaded it up with vegan bacon, broccoli, and green onions. Because, why not?

The result is a kid-friendly, secretly pretty healthy bowl of pasta.

What I like about using cashew butter instead of soaked, raw cashews is that it's easier to get the creamy texture you associate with cheesy sauce. I've made this sauce in my Vitamix and in my 10-year-old Magic Bullet. It came out great both times! With a regular blender, you will need to puree longer, and you may need to add some extra water, but it's much easier than pureeing whole cashews, even raw, soaked ones. There are directions for both a regular and high speed blender in the recipe below. 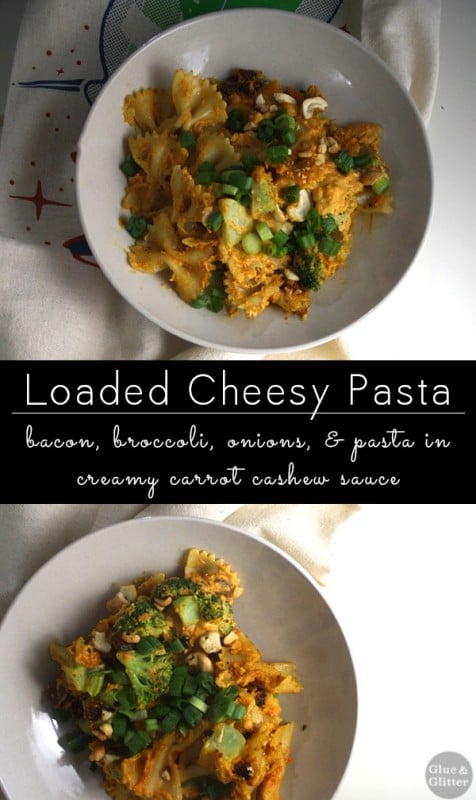 You can really change up this recipe to suit what you have on hand. If you like things plain, just toss your pasta in the cheesy cashew carrot sauce, and you're good to go. You can mix in your favorite veggies, if you like. You can spread it into a casserole dish, and bake it, or not. Have fun with this dish, you guys!