Churro French Toast has all of the cinnamon sweetness of a churro in a crunchy vegan French toast recipe that you can eat for breakfast!

How to Make Churro French Toast

You don't need any fancy ingredients to make this cinnamon French toast recipe. I was able to get everything needed to make this recipe at the regular grocery store near my house.

This 7-ingredient vegan French toast recipe is super easy to make. Instead of using eggs, you dredge your bread slices in a silken tofu mixture before you fry it.

When the toast is done frying, you quickly coat in in a crunchy cinnamon-sugar mixture to bring that churro goodness into the mix.

Serve this with a dollop of vegan butter and a drizzle of maple syrup for some breakfast decadence.

This Churro French Toast recipe is a sample from The Simply Vegan Cookbook by Dustin Harder.

Dustin's book is all about making vegan eating easy and affordable, and I think this recipe is a great example of that.

If you want to check out some other recipes from this book, try these on for size:

Of course, to make vegan French toast, you need to start with vegan bread.

"Where can I get vegan bread?" is a really common question that I see from folks who have just gone vegan. And I can understand why. What is up with hidden animal ingredients in breads?? So annoying.

But don't despair! There are plenty of great vegan bread options out there for everything from sandwiches to this Churro French Toast recipe.

The trick to finding vegan bread is looking out for sneaky animal ingredients. These are some common things to look out for when you're searching through the bread aisle:

Their 21 Whole Grains and Seeds variety is the bread I used for the photos and video you see here, and it's the one we eat every day. It's currently the only whole grain bread that everyone in my family can agree on!

OK, so you have the bread situation covered. You're basically ready to rock. You only need six more ingredients to make your Churro French Toast. Let's cook! 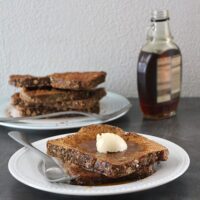 recipe from The Simply Vegan Cookbook; published here with permission from Dustin Harder