Coconut oil in coffee is a whole foods alternative to non-dairy creamer. Here's the vegan bulletproof coffee made I tried and what I thought.

My husband is kind of a coffee nerd. We have a ton of different coffee brewing methods in our house: cold brew, Chemex, French press, and a couple that I can't even name and have no idea how to use. The point is, the man loves his coffee and loves trying new ways to make an even better cup. I love this about him, because I also dig a good cup of coffee, and I get to enjoy the fruits of all of this experimenting.

I'd never heard of bulletproof coffee before this weekend when Dave discovered it in his coffee-making research. Apparently, putting unsalted butter into coffee is a thing that people do. Since I'm vegan and Dave and dairy don't really get along, butter wasn't really an option, though. He kept digging and found this post on making a vegan version using all coconut oil instead.

That's when I got a text from him asking me to pick up coconut oil next time I was at the store, so that he could try putting coconut oil in coffee to see how it went.

He was after a non-dairy coffee-lightening option that was less processed than the soy creamer he's been using for years, so he whipped up a mug of vegan bulletproof coffee and tried it out. The recipe Dave used called for one tablespoon of coconut oil, but if you like your coffee on the lighter side, I'd up it to two or maybe even three. Start with one, and add more until it's the color that you're after.

I will say this: if you do not like the taste of coconut, this bulletproof coffee recipe is not for you. Dave isn't a coconut fan, and he ended up giving me his mug.

I love coconut, so I liked coconut oil in coffee a little bit more than he did. The resulting coffee retains its bitterness more than with creamer or soy milk. It has a nice coconut taste and rich texture that you don't get with soy milk, my usual coffee lightener of choice. Since you make this in the blender, you end up with a frothy coconut-coffee cream on top, like a super decadent latte or cafe breve.

I'd say that coconut oil in coffee struck me more as a once-in-a-while drink than an every day situation, though.

The main downside I noticed with coconut oi in coffee is that the bit of coconut oil doesn't really cut the acid the way a big splash of soy milk does. I pride myself on having a pretty iron stomach, and I couldn't handle mug after mug of acidity like that. For every day coffee-drinking, I'm sticking to my soy milk, but if you like your coffee stronger, you might dig bulletproof coffee more than I did.

The original vegan bulletproof coffee recipe calls for stevia, but I don't care for stevia. It tastes like aspartame to me. I don't usually put sugar in my coffee, and Dave's sweetener of choice for coffee is brown sugar. Since he'd fixed this mug for himself, it had a little brown sugar in it, and I think it went really well with the coconut. 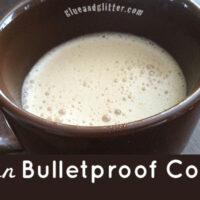 Previous Post: « Make Easy Beans and Rice all in the Rice Cooker!
Next Post: Sweet and Spicy Ginger Trail Mix Recipe - Plus a Printable Recipe Card! »