If you haven't had floating islands, you're in for such a treat! This is one of my favorite desserts from my childhood, and it was impossible to veganize without vegan meringue. 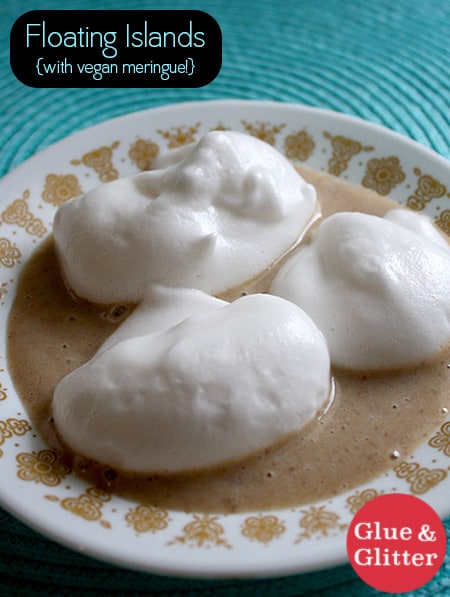 Until about two weeks ago, vegan meringue was a fantasy. It was one of those things on the short list of Vegan Food That Cannot Be. Until the awesome Goose Wohlt in the Facebook group What Fat Vegans Eat started doing some serious kitchen science.  And you won't believe what he used to make it:

That's it! Some folks have added egg replacer, but it's totally optional.

The resulting meringue does have a slight beany taste, but it's also sweet and fluffy, just like meringue should be. I am going to experiment with some other bean liquids to see how the flavor changes. Adding a little lemon juice or pureed ginger might help mask that bean taste. It's subtle, but it's there. This vegan meringue thing is new, so I'm excited to see where it goes! Remember how beany soy milk used to taste? This stuff takes time. 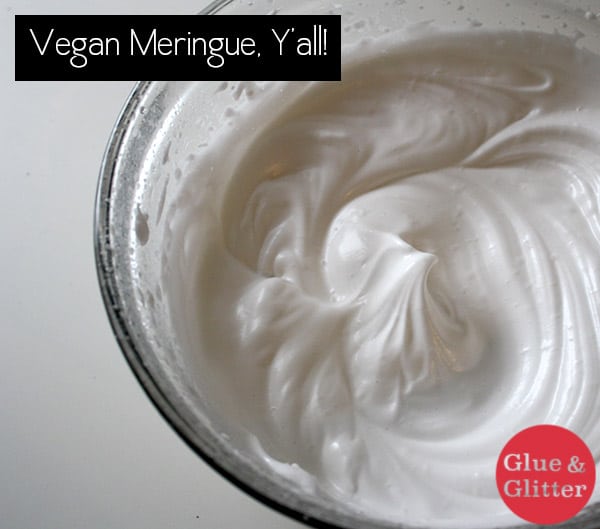 There has been meringue all over my Facebook feed lately. And there are already vegan macaron recipes popping up. I like a macaron, but the meringue-based dessert that's really nostalgic for me is called floating islands.

Floating islands are puffy poached meringues floating in a sea of caramel, and they remind me of visiting my granny's village with my parents and sister. Granny Daniele lives in St. Aubin just outside of Paris, and there was one restaurant in town when I was a kid. Floating islands were always on the dessert menu, and I ordered them every time. Obviously, the day that vegan meringue happened, floating islands were my first thought.

This recipe is a mashup of several recipes. Epicurious has a recipe for floating islands that isn't quite what I remembered, but I followed that method for poaching the vegan meringue. For the meringue itself, I followed what Somer recommended on Facebook. And for the caramel, I used Veg Kitchen's Date Caramel Sauce.

So, the basic vegan meringue recipe is liquid from one 15 ounce can of beans + ½ cup sugar, beaten until it forms stiff peaks.

When I first tried to make this, I was beating my meringue by hand, and I have to tell you, it did not work for me. I spent about an hour trying to get this to happen and even started over. The only result that I got was an intense wrist workout. 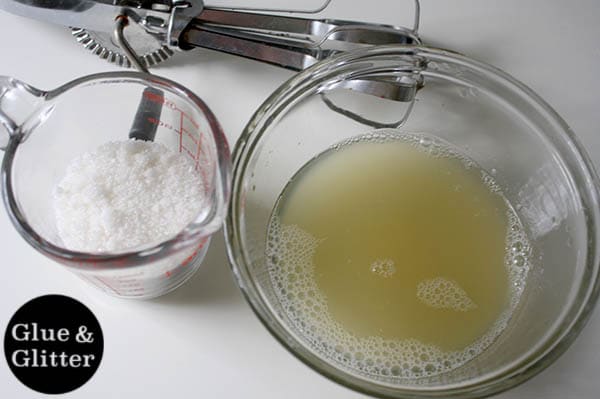 Look how naive and optimistic I was! My trusty hand mixer did not do the trick. It takes a lot of beating to make vegan meringue.

I don't usually advocate for special equipment in the kitchen, but in this case an electric hand mixer is so, so worth it. I found this Hamilton Beach one for less than $25 on Amazon, and it was comparably priced at the Target by my house. You can also borrow from a friend, if you don't want to buy and store one more kitchen item.

To make traditional floating islands, you poach your meringue in milk, but this vegan meringue did not do well when I dropped it into the pan. They stayed together, but the pot kept boiling over almost as soon as they hit the milk. It was a frustrating mess. What ended up working best was skipping the poaching step and just chilling the meringue before floating it. It's more fluffy than chewy this way, but it's also much easier. Hurrah for skipping a step!

OK! So, you're all ready to make some vegan meringues and float those suckers in caramel, right? Let's make some floating islands, y'all! 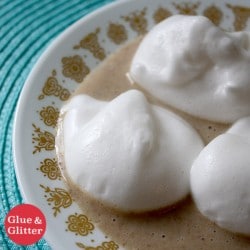