Habanero IPA is the spicy base for an IPA shandy made with sweet and citrusy mango-lime puree. It's a beer cocktail perfect for summer.

Have you tried Sculpin Habanero IPA yet? I spotted it at Whole Foods just a few days ago for the first time and was super intrigued. It costs a $15 six pack (!), so I skipped it, but when I got home I immediately regretted it. I love IPA and spicy things! This seemed like a beer crafted just for me!

Sculpin Habanero is an important part of this IPA shandy recipe. You can try substituting other spicy IPAs, but I can't guarantee your results like I can with this one. Sculpin makes a great IPA in general, and I can't vouch for other IPAs that pack heat.

Note: Sculpin did not compensate me in any way for this recipe or review.

A very informal survey about this beer on social media revealed that most folks find it too spicy. For whatever reason, those reviews made me want to try it even more!

Then my friend Lis chimed in on Instagram saying that she thought I'd love it. Lis knows my palate, so that pretty much sealed it.

A friend of a friend was going to hook me up with a few bottles to try, but after confirming that Sculpin IPAs are vegan, I was so eager to try it that I just ran out to the market and grabbed a six to try.

On its own this beer is pretty spicy. It's not that immediate wallop of spice that you get from hot sauce. It's more like a slow burn in the back of your throat.

I loved it, but I could see how someone who isn't quite as into spiciness might think it was a bit much.

Even with my taste for heat, I thought this was a sipping beer. The flavor is strong, for sure! Also - and maybe this is just because I love it? - this beer made me crave queso like no other. I had just eaten supper when I cracked this bottle. So that's a thing.

Wait, but what's a shandy?

"Shandy" is the name I learned for a beer cocktail that I used to like a lot in college. When my dad lived in Copenhagen in the 60s, he and his Danish friends used to mix their beer with lemonade in the summer.

He passed this trick down to me and my sister, and we both really dug it. In college I drank my beer this way quite a bit. It's super refreshing!

It turns out that this combination is called a shandy. A shandy is beer mixed with juice or soda. Usually it's lemonade, limeade, or ginger ale, but you can certainly branch out.

My IPA shandy is a little bit unconventional.

Instead of a juice or soda mixer, I'm using a more concentrated fruit puree and no added sugar. Because you know that I don't like a lot of refined sugar in my drinks.

This IPA shandy only has three ingredients. The beer has a lot going on, so I didn't want to mess with that too much.

To make this shandy, you start with a super easy mango-lime puree. Just toss frozen mango into the blender with fresh lime juice, and blend until smooth.

Divide the puree between two pint glasses full of ice, then slowly pour on the Sculpin Habanero IPA.

That slow pour is key, and make sure you tilt your glass and let the beer run down the side of the glass. If you pour quickly and straight on, there will be some epic foam.

If you're making this for a party, you can multiply the puree for as many shandies as you think you'll need, and mix them up on the spot. The recipe below yields about one cup of puree for four servings, so scoop ¼ cup into each glass if you're going the bigger batch route.

This shandy has an added benefit: the ice and the mango puree turn one expensive beer into two pint-sized cocktails. It's basically a 50 percent discount. Fancy and economical! 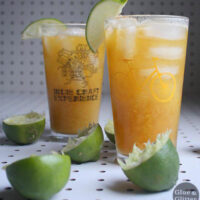 Disclosure: I was not compensated in any way for this review or recipe.