Palm oil production - even "sustainable" palm oil - is bad news for orangutans. Luckily, it's not too hard to make your own vegan butter that's palm oil free! 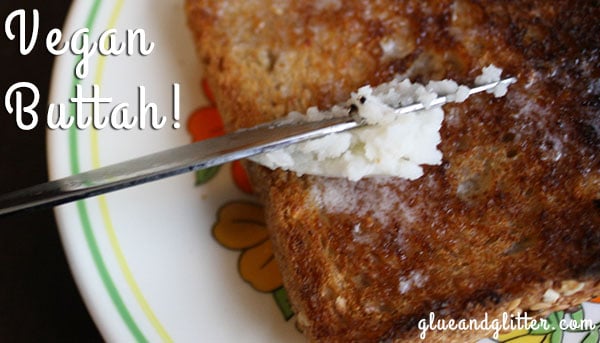 Seriously, you guys, I think Ketty from Luminous Vegans and I are food twins. Her taste in food is very similar to mine, and I feel like this isn’t the first time we’ve been working on the similar recipe ideas at the very same time. A couple of weeks ago she posted an amazing-looking vegan butter recipe, and this is something that’s been on my mind for a little while now.

It all began about a month ago when my friend Justin Van Kleeck shared some eye-opening information about palm oil.

Here's a peek at what's so bad about palm oil production:

Perched atop the remains of the last tree, an orangutan looks helplessly on what was until recently the forest he was living in but is now only ruins. Armed with chainsaws and bulldozers, workers of Bumitama Gunajaya Agro (BGA), a palm oil company, have completely destroyed the rainforest for miles.

If you want to speak up against "sustainable" palm oil that hurts orangutans, you can sign the Rainforest Rescue petition here.

Are you bummed? I was super bummed, but Justin isn't the kind of fellow that just drops bad news without offering a solution. He pointed me to this recipe for vegan butter from Vegan Baking that uses coconut oil as the base.

But if palm oil is bad for wildlife, is coconut oil much better? It turns out that it really is! What’s important when choosing coconut oil is that you opt for a brand that’s Fair Trade certified, because harvesting is hard work and often involves child labor and dangerous situations otherwise.

I was not able to find Fair Trade, unrefined coconut oil at the store, but I did find Spectrum Organic Coconut Oil. Spectrum is not Fair Trade certified, but they do have a commitment to sourcing from small, family farms with good labor practices. Here's a statement from their site:

Studies have shown that by encouraging small-scale farming in poor areas and third world countries, poverty is reduced and the hope of prosperity rekindled. Small-scale farming is one of our best hopes for preserving the deeply seeded agrarian traditions found in so many societies of the world.

Spectrum is cognizant of the myriad benefits of small-scale farming, which is why we devote ourselves to culling trusted family sources for our products. Read here about the diverse group of people Spectrum sources from. At its core, small-scale farming is about hope; and that is something we strive to support in everything we do.

I hope I made the right decision! If you know of a brand of refined organic coconut oil that definitely uses fair labor practices, I would love to know!

The other concern I had with coconut oil is that it can taste…well…like coconuts. I love coconut - don’t get me wrong - but Dave is not a fan. I asked Justin about this, and he suggested that I use refined coconut oil, which doesn’t have as strong a coconut flavor.

Let me take a moment here to thank Justin for pointing me to all of these resources. I love how solution-oriented he is! I feel like a lot of folks that bring up issues like palm oil in vegan butter just throw a problem out there without offering any way around it. Instead of just bumming me out, he was willing to go way, way above and beyond to help find a solution that will work for my family.

OK, so there was one last snag with this vegan butter recipe: it called for lecithin granules. I am not a fan of specialized ingredients like this, and I know that you guys aren’t, either. The recipe said that you can leave the lecithin out, so I gave that a go. 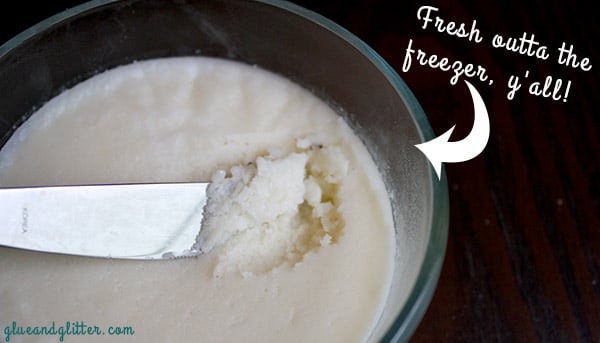 I'm not going to reprint this recipe, because I don't have permission from the folks at Vegan Baking. I've actually looked at DIY vegan butter recipes before, though, and felt very daunted. So! Instead of a recipe (which you can find here), I'm going to share my experience making it, in case you feel a little daunted too. This was actually very easy to make - much simpler even than making cookies from scratch. There's a lot of measuring, but your blender does most of the heavy lifting. The hardest part is waiting the hour at the end for the butter to solidify so you can try it!

To start off, here are the ingredients that I used:

I will say this: leaving out the emulsifiers sure made this recipe come together more quickly. My butter won't be as solid at room temperature, but you get to skip a lot of blending and scraping. There's still a little bit of blending, but not nearly as much.

Basically, you just curdle the soy milk with the vinegar, then melt the coconut oil in the microwave. It was a little chilly in my house, so my oil was pretty hard. It took about one minute on high to melt completely.

Combine the ingredients in the blender (make sure you read the directions on this - they don't all go in at once). I wanted to make extra sure that this recipe would work for anyone who wanted to try it, so I skipped the Vitamix this time and used my very crappy old Magic Bullet to do the blending for this recipe. It worked perfectly.

When everything is totally combined, stick it into the freezer for an hour to harden. Boom! Vegan butter!

Since I didn't use emulsifiers, my vegan butter didn't turn out like sticks. It was more of a tub margarine, so I'm keeping it in the smallest container that came with my set of Pyrex food storage containers. They said it will keep for a month in the fridge or a year in the freezer, but I don't see this lasting in our house for more than a few weeks. Between morning toast, mashed potatoes, and random baking adventures, we go through vegan butter pretty quickly around here.

Have any of you guys tried making palm oil free vegan butter? I'd love to hear your experiences!