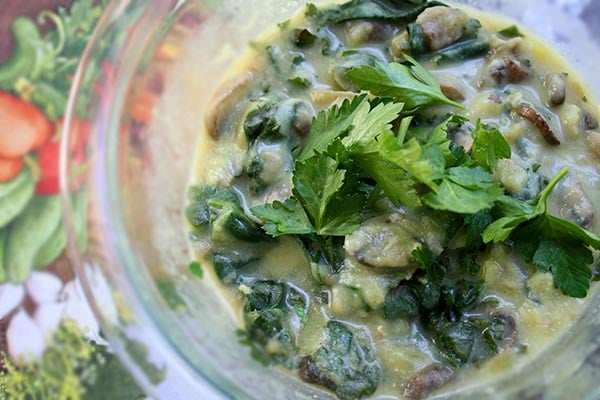 Who says potato soup has to be full of meat?

Most potato recipes I’ve seen seem to rely on meat as a seasoning. Instead of ham, fatback, or bacon, this soup gets its earthiness from sauteed mushrooms and a protein and iron boost from lots of kale!

Between getting ready for this baby and keeping up with my freelance assignments, things have been a little on the hectic side around here! One of my goals for the first part of the year is to work on quick, healthy meals that I can make, because I don’t anticipate this level of busy changing after our little one gets here. This hearty potato soup recipe might just become a new staple around here!

Another change you might start seeing in my cooking is less salt and sugar. I’ve noticed that both seem to do me wrong now that I’m in my third trimester, so I’m trying to cook with less of the white powder and find other ways to make things delicious. I’m sure I’ll still whip up the occasional batch of cookies, but I’m also going to be looking for healthier ways to satisfy my cravings for sweet and salty food.

This soup uses low sodium vegetable broth. I never used to worry about salt, because of my running schedule. I was losing so much salt sweating through my runs that it wasn’t something that I even thought about, but now that I’m in my third trimester my workouts have gotten a lot lower-impact and a lot less sweaty. If you’re not watching your salt, don’t sweat trying to choose a low-sodium broth! This recipe will be just as tasty with regular veggie broth. You might just end up using a little less lemon juice at the end.

Potato soup is total comfort food to me, and of course I love any chance to use my immersion blender! If you don’t have an immersion blender, I highly recommend investing in one. Your soup- and sauce-making will never be the same! You don’t need an immersion blender to make this soup, though. You can just as easily transfer the soup to a regular blender, puree it in batches, and then transfer it back to the pot. The immersion blender makes pureeing soups faster, but it’s not a requirement.