Sour beer is super popular here in Atlanta right now, and while I'm usually an IPA drinker, I really enjoy a refreshing, sour beer when the weather starts to warm up.

You can make this sour watermelon shandy with any sour beer you like. The joy of adding fruit to your beer is that even not-so-great beer becomes pretty darn good.

There are lots of vegan sour beers out there. Just hit up Barnivore to find out if your fave is free from things like gelatin and fish bladders!

This drink seriously couldn't be easier to make. All that you need is a blender. You can strain your watermelon puree, if you want a smoother texture to your drink, but if you're like me and enjoy a little pulp in your fruit drinks, no straining is needed. You do you.

Just puree your watermelon and combine it in your glass with lemon juice, ice, and your sour beer. Easy peasy, and you can make two drinks in about five minutes! 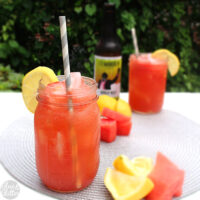