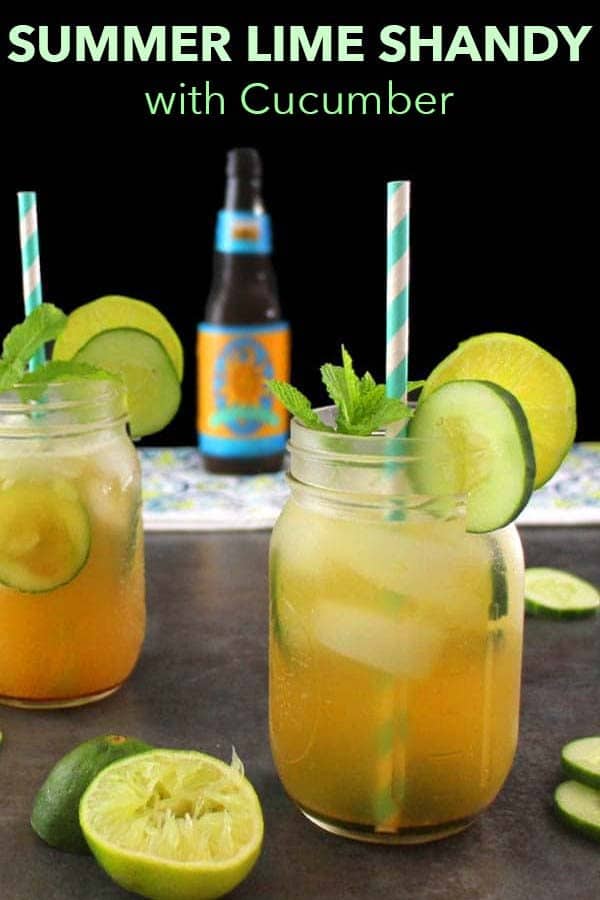 Fix yourself a cold, refreshing Cucumber Lime Shandy for some proper porch sipping this summer. You only need four simple ingredients to make it!

If you've never had a shandy before, you are in for such a treat! Traditionally, a summer shandy is a beer-lemonade mix (usually I see pilsner as the base), but you can really combine the beer of your choice with any juice or soda to make the shandy of your DREAMS.

This version uses wheat beer, a little bit of sweetener, and plenty of fresh cucumber and lime goodness instead. It's seriously a glassful of summer.

What Beer to Use

I used Bell's Oberon, a vegan wheat beer, to test this recipe. Bell's did not sponsor this recipe - I just wanted to use a wheat beer that was vegan and widely available. Any wheat beer you like will work well. The cucumber and lime are the true stars of this recipe!

If you can't find Oberon, don't worry! There are tons of vegan wheat beer options out there. Just choose one that sounds good to you and doesn't have any flavors that might be weird combined with cucumber and lime.

How to Make a Cucumber Lime Shandy

To make a traditional summer shandy, you just combine your beer and juice or soda -- maybe with some ice -- in a tall glass. This recipe is almost as simple. There's really just one extra step, and it takes about two extra minutes.

Just combine the lime juice, cucumber slices, and agave nectar in your glasses, and muddle.

Don't worry if you've never muddled before! You don't need any special tools to do it. Muddling is a fancy word for smushing.

If you don't have a muddling tool, you can use a spoon to mash and mix the ingredients instead. the idea is the break down the mint leaves and cucumber a bit, so they'll release more flavor into the finished drink.

Once you muddle the fruit and agave, you're ready add your beer to the glass, fill the glass up with ice, and top off with a splash of soda water.

Stir, and serve garnished with extra lime and an optional sprig mint. You can also add a cucumber wheel, just for pretty.

One last note before we shandy, y'all: If you aren't a regular beer drinker, I don't want you to pour this beer like a rookie. When you pour that beer into your glass, pour slowly.

You don't have to pour at a slow trickle, but if you pour too fast, you'll end up with a ton of foam that takes ages to dissipate. Tilt the glass slightly, then pour the beer slowly down the tilted side to avoid excess foam.

If you do pour too quickly, just take a break until the foam subsides. If the foam is taking forever to go down, scoop it off with a spoon, then pour the rest of the beer a bit more slowly.

You'll get the hang of it in no time. 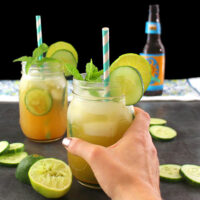