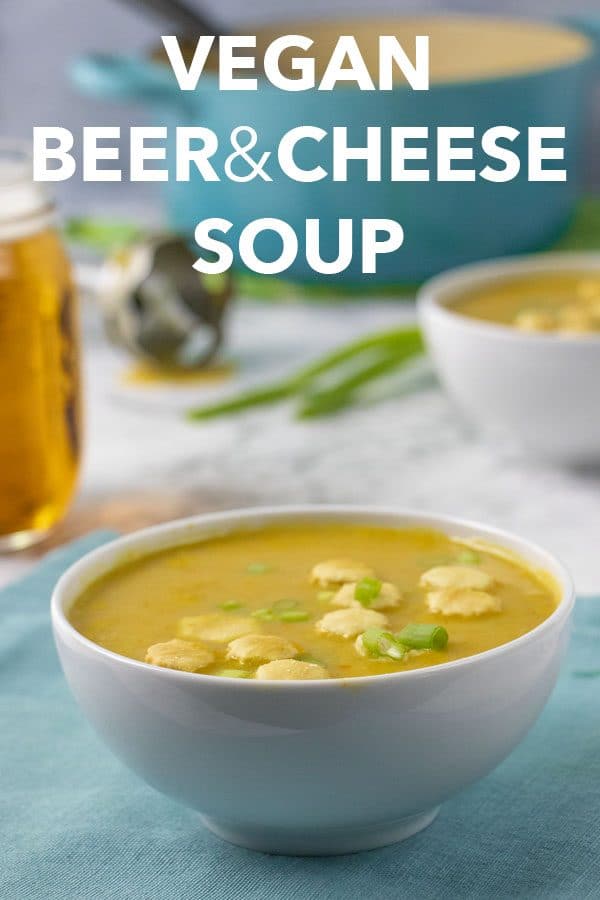 A decadent, warming bowl of Vegan Beer and Cheese Soup is a rich, creamy, and satisfying supper on its own or as a side dish!

When it's cold out, this beer and cheese soup recipe always comes to my mind. My dad used to make it for us when we were kids whenever there was a cold spell. It's rich, comforting, and it warms you up from belly to toes.

This soup is a one-pot situation, which means easy clean-up! Start by sauteing garlic and vegetables in a little bit of olive oil until the veggies start to get tender.

From there, you'll add the broth and beer and let those simmer to soften the veggies even more and cook off some of the beer's alcohol. (See below for more on that).

Now, it's time to add your cheese, nutritional yeast, and a little bit of vegan Worcestershire sauce (more on that below, too). Stir, and melt that cheese!

Once the cheese begins to melt, it's time to turn off the heat and get in there with an immersion blender to puree until your soup is completely smooth.

Season with salt and pepper, and you are ready to EAT!

If you're new to the world of vegan beers, don't worry! There are lots of them out there, but beer is one of those things that can contain hidden animal ingredients.

Some brewers still use animal products, like isinglass and gelatin, to process their brews. Luckily, many don't.

There are SO many vegan beer options out there! If you're not sure about the can in your hand, check Barnivore to see whether your favorite beer is animal product free.

That's because a lot of store brand Worcestershire sauces are vegan.

Want to know why?

The thing that makes conventional Worcestershire sauce non-vegan is anchovies. Y'all, anchovies are expensive. So budget brands leave them out to keep the price lower. A win for them and for you!

This soup will contain a small amount of alcohol per serving. You're only adding one beer to a whole pot of soup, so the alcohol content per bowl isn't super high, even before you start cooking.

I simmer this soup for at least 15-20 minutes, which cooks off a good amount of the alcohol in the beer. If you want to cook out more, you can simmer for up to an hour. Check out this article on how long it takes to cook alcohol out of a dish, if that's a concern for you.

You can also reduce the amount of beer, substituting more broth, if you like. Twelve ounces is 1 ½ cups. I'd say you could go down to ¾ cup beer and ¾ cup broth without sacrificing too much of the flavor.

Your other option is to go with a non-alcoholic beer, if you want to really keep the alcohol content close to zero.

Got your beer ready? Pour yourself a glass, and save one can or bottle for the soup! 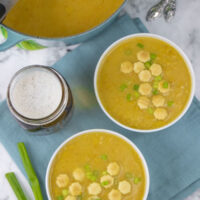 See the post above for notes about choosing vegan Worcestershire sauce and vegan beer for this recipe. There is also info about the alcohol content in this dish.