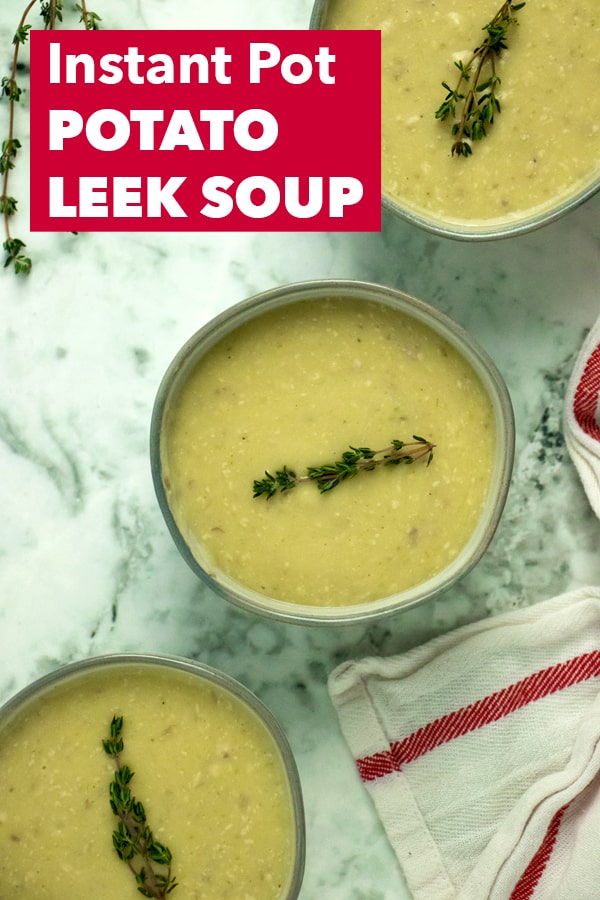 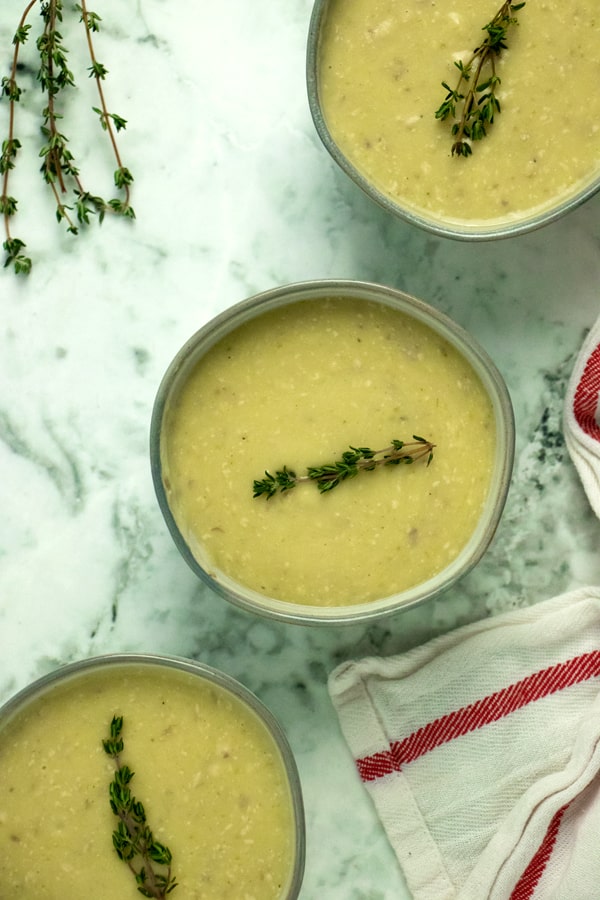 Make creamy Vegan Potato Leek Soup in the Instant Pot or on the stovetop. Either way, this recipe is super simple to make, and you are going to love it!

I also realized this was a soup recipe that was begging to be adapted for the Instant Pot. So here we are! (But don't worry -- I have stovetop instructions for you, too.)

Leeks are what bring the fancy to this recipe, and it is crucial that you prep them properly. It's not hard to do this. You just have to do it.

Leeks are part of the onion family, and like many other onions, they contain layers. Because the grow underground and don't have an outer peel to remove, those layers get full of grit.

Y'all: you do not want any gritty bites of soup! Potato leek soup should be velvety smooth.

Here's the best way I've found to clean the grit out of leeks:

Once you prep the leeks, it's soup time!

Traditional potato leek soup uses heavy cream to get a really rich result. You could use vegan creamer to achieve similar results, but I prefer using cashew cream in situations like this.

Cashew cream is super easy to make and has a very mild flavor. Perfect for adding creaminess to this soup!

Start by soaking your cashews in hot water for 10-15 minutes. Drain the soaked cashews, and then puree them with a little bit of fresh water until you have a completely smooth mixture.

In a regular blender, you just need a bit of patience. Just blend in cycles no longer than 1 minute each, letting the blender's motor rest between cycles. You don't want to burn out your blender! Trust me, I've done this, and it stinks.

To make this soup in the Instant Pot (or any other electric pressure cooker), you truly just dump all of the ingredients except for the cashew cream into the pot. Cook on high pressure for 5 minutes, and do a 10-minute natural release.

Now, it's time to puree the soup. You have two options here:

I prefer to use an immersion blender, because then I don't usually need to warm the soup back up. Plus, transferring soup to a blender is messy and takes more time.

But if you aren't looking to add another gadget to your kitchen, I totally get it. You do you!

After that, stir in the cashew cream, and it's time to eat!

On the stovetop, you add the same ingredients to the pot. Bring everything to a boil, stirring to dissolve the broth cubes. Then, reduce the heat, and simmer, covered, until the potatoes are tender.

Just like with the Instant Pot version, you puree the cooked potato mixture, add the cashew cream, and serve.

How to store and reheat

Any leftover soup will keep for 3-4 days in the refrigerator in an airtight container.

You can reheat in the microwave or transfer to a small pot and warm on high heat, stirring constantly, until the soup is heated through. 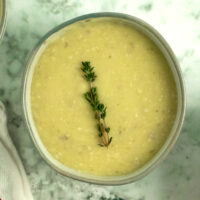 For the Cashew Cream

For the Potato Leek Soup

Make the Potato Leek Soup in the Instant Pot

Make the Potato Leek Soup on the Stove