There are so many ways to make vegan pulled pork, and what I love about Lina & Alex's recipe is that it's easy, and the mushrooms really bring that meaty texture and umami flavor to the mix. Make it with homemade BBQ sauce or store-bought vegan BBQ sauce.

It's not too hard to shop for vegan BBQ sauce, but there are a few ingredients you want to keep an eye out for:

The good news is that many store brand BBQ sauces are vegan, because it's cheaper to make vegan BBQ sauce. That also means you can save a buck when you're shopping for the ingredients to make your vegan pulled pork.

This recipe makes four very generous servings. I think you could easily get six or even eight sandwiches out of this recipe, just get yourself more buns and toppings.

Great Vegan BBQ without a Grill is by the mother-daughter team behind the blog Veganosity, and the book is what it says it is. It's packed with BBQ recipes that you can make right in your kitchen.

This really appeals to me, because I love grilled food but don't super love the grilling part. Dave tends to man the grill in our house, while I fix sides like Broccoli Slaw and Dilly Potato Salad. We play to our strengths around here.

The book walks you through some basic ingredients and kitchen tools, then they break the recipes up into categories.

There's a chapter of entrees to win over the meat-eaters in your life, burgers and sandwiches, and food on sticks. There are also chapters packed with sides, dips, and sauces.

Some of my favorite people have also reviewed the book. Check out these other recipes from Great Vegan BBQ without a Grill:

If you're like me and love BBQ but don't love to grill, this book is a must-have!

But Back to that Vegan Pulled Pork!

You only need five ingredients to make your pulled mushroom BBQ, plus buns and toppings.

I love that they top this sandwich with tangy, buttery arugula; sweet tomato; and sour pickle slices. That combined with sweet, sticky BBQ sauce is a party in your mouth.

Just fry up the mushrooms with onions, toss in your BBQ sauce, and heap that vegan pulled pork onto the vegan BBQ sandwich OF YOUR DREAMS! 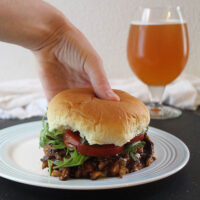