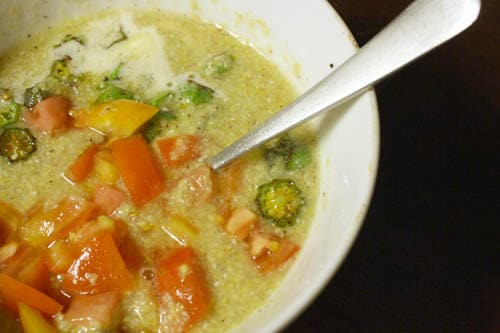 These vegan southern-style grits satisfied my shrimp and grits craving without a shell in sight.

Shrimp and grits is sort of a Southern brunchy staple, and I have to admit it's something I miss. I tried making tofu and grits, using tofu seasoned with some Old Bay, and it was good but wasn't quite hitting the spot.

Over at Eat Drink Better, Jeannie talked about Umami, a fullness of flavor, and offered some vegan ideas for working umami into your meals. Once of her suggestions was to add tomatoes, and it just so happened that Vegetable Husband blessed me with a lovely haul of tomatoes this week!

Man, did this hit the spot! The cool tomatoes and slightly crunchy okra were just right mixed with the warm, creamy grits. I had this for Sunday brunch, but I think it would make a great dinner dish, too! Maybe with a salad or some baked beans on the side?

My favorite thing about this dish, after its general deliciousness, is that almost all of the ingredients came from Vegetable Husband: the okra, tomatoes, and the corn grits were all from local, organic farmers. Nothing makes a dish tastier than feeling good about what's in it!