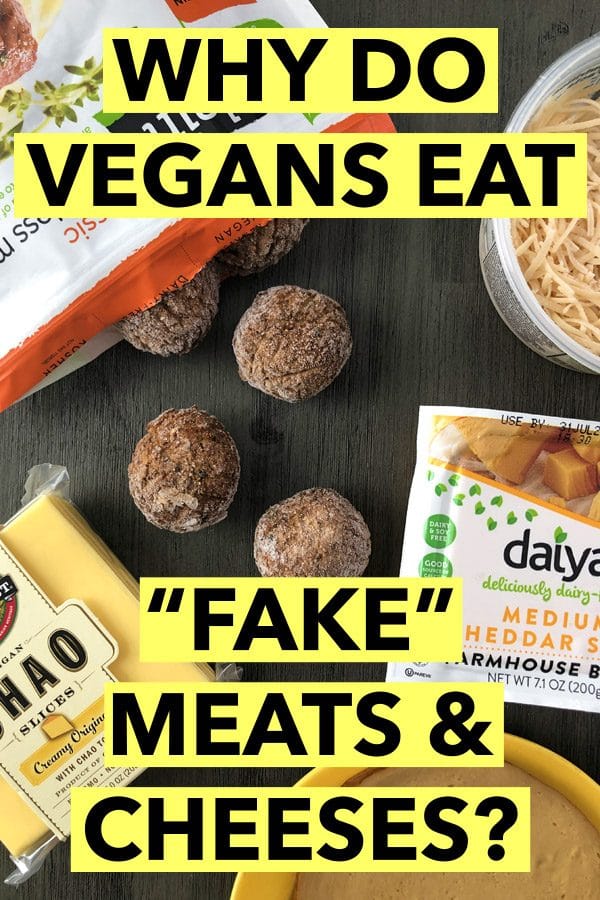 If vegans love vegetables so much, why do we eat “fake” meat and cheese? Let’s dive into this common question about eating vegan.

I have been vegan since 2006, and after people tell me that they’d die without cheese, they often ask why vegans eat "fake" meat and dairy. If vegans hate animal foods, why chase those flavor profiles?

Sometimes, this question is meant as a snarky "gotcha!", but sometimes I do think it is on the level. It can seem like a disconnect, can’t it? If the idea of eating animals is abhorrent, why would you want food that tastes like animals or animal products?

I think this question reveals some confusion about why many people go vegan. Veganism isn’t an eating disorder or some kind of contest to see who can cut the most things out of our diets. Most people don’t go vegan because we hate decadent, delicious food.

These foods are not 'fake'.

As you've probably noticed, whenever I reference "fake" meat and cheese, the word fake is in quotes. That's because I strongly agree with my friend Dianne Wenz, who makes a powerful case against calling vegan foods "fake.

"I cringe when I hear people refer to vegan food as “fake”. By calling it fake, you’re implying that the non-vegan versions of food are the only “legitimate” version, and everything else is a knock-off."

Vegan food is food. It's real, and it can be just as delicious as non-vegan food.

Not everyone goes vegan for health reasons.

Some vegans choose this lifestyle for health reasons or because they think it will help them lose weight. Some go vegan for the environment. Others go vegan for the animals. For many of us, it’s a combination of these factors.

Vegans are just people, and like all people, we have different reasons for eating the way we do and different tastes. There are certainly vegans I know who are disgusted by meat and cheese alternatives that taste too much like the "real thing".

There are also many like me, though, who embrace these foods.

Is the Impossible burger healthier than a beef burger? I have no idea. What I do know is that it's far better for animals (not to mention the larger environment), and that's what matters to me.

As a vegan, you’re often treated as the spokesperson for all vegans. I certainly don’t know what every vegan person is thinking, but I can speak from my own experiences. I am one of those confusing vegans who loves meat and cheese alternatives. Here’s why.

They make the switch easier.

Most vegans didn’t grow up eating a plant-based diet, and meat and dairy alternatives can help make it easier. Deciding that you don’t want to harm animals doesn’t instantly undo a lifetime of habit-forming.

I hear a lot of people in vegan groups talk about vegan meat and vegan dairy products as “transition foods”. If someone wants to go vegan, but they’re afraid that giving up cheese will be too hard, vegan cheese is there for them, either short- or long-term. Why shouldn’t you use products like these to help support a switch to a more ethical way of eating?

For me -- and for many people who go vegan for the animals -- "fake" meat and dairy products are not just transition foods. They’re tools in our permanent toolbox. We are simply choosing a way of eating that reflects our beliefs, and these foods help make it easier to do that.

Why should animals have to suffer, just because I’m having a craving? If I want cheese, I eat vegan cheese. If my family is firing up the grill, I pick up a pack of vegan sausages or burgers at the store, because that’s what I like. These choices don’t fly in the face of my ethics -- they align perfectly.

Vegans eat meat and dairy alternatives because we can. When I went vegan more than a decade ago, vegan cheese was horrible, and that made it incredibly hard for me. It was almost impossible to find vegan milk that didn’t separate and curdle in my coffee. And the pickings were slim, if you were craving a sausage or burger that tasted like the ones you ate growing up.

I'm so happy for new vegans today, because there is a world of delicious options out there to help them transition with ease. These options make it easier for people to go vegan and easier to stick with it, whatever our motivations.