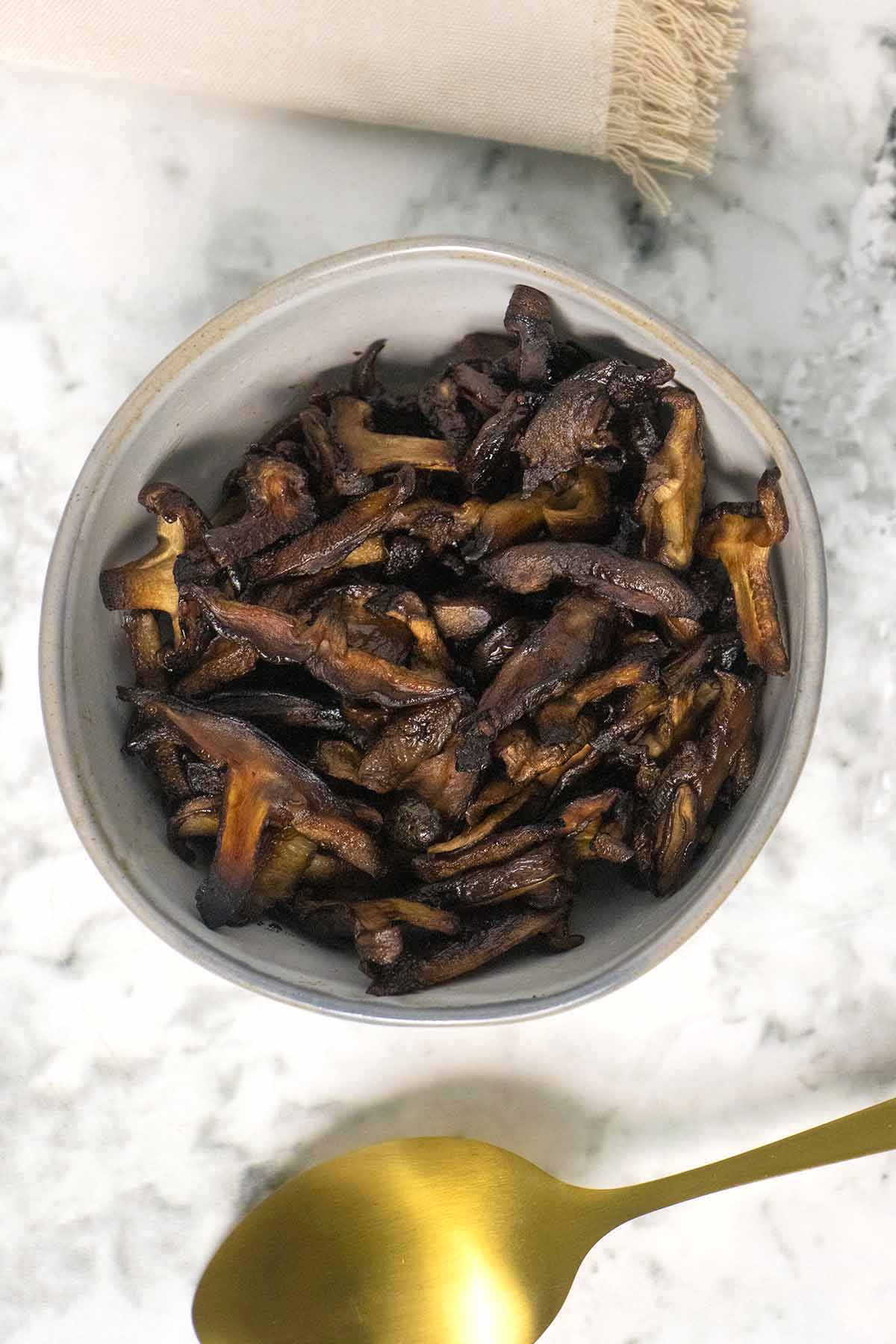 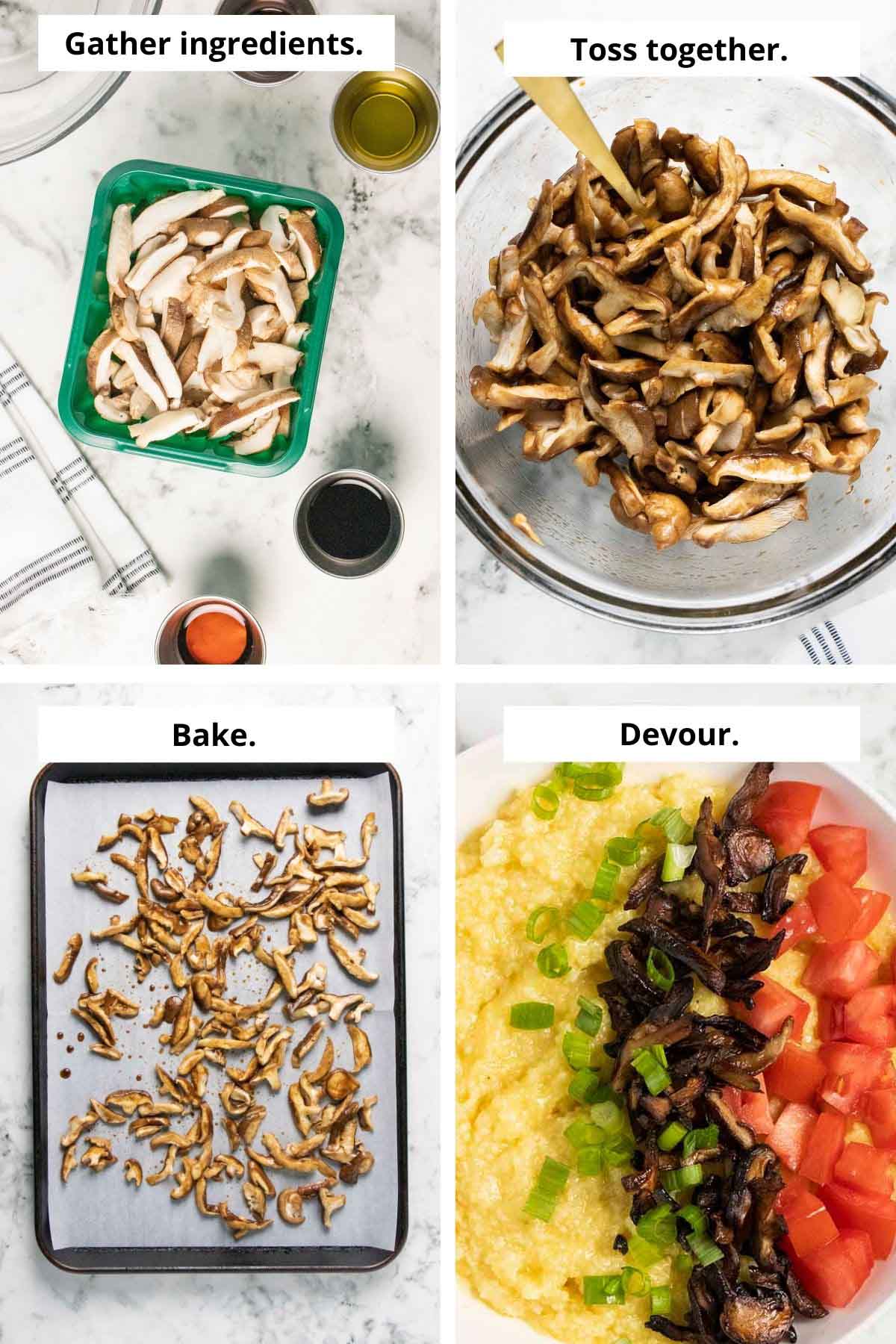 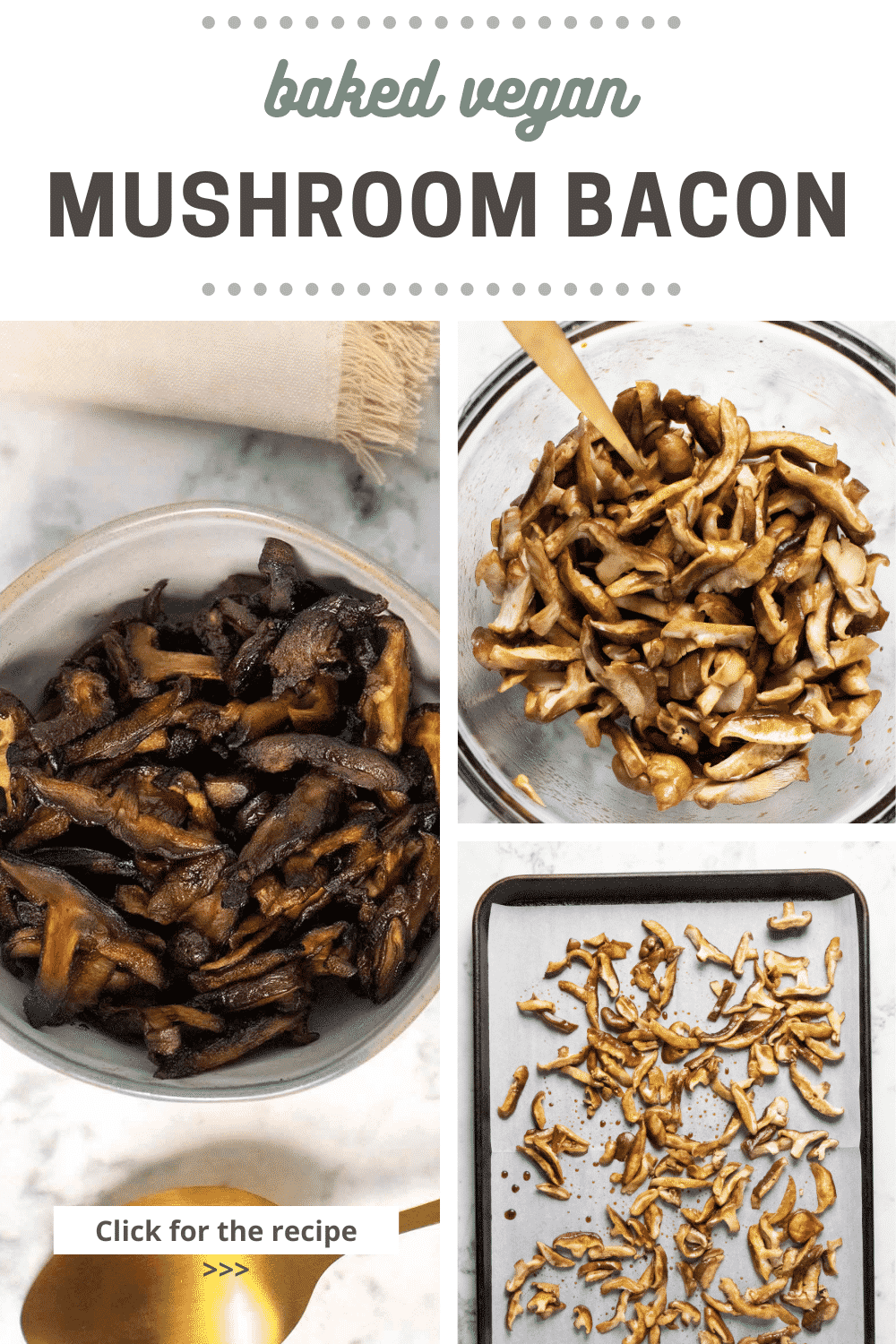 Crispy, smoky shiitake mushroom bacon takes just minutes to make in the oven. And you only need five ingredients to make it!

Shiitake bacon gives you all of the smoky-sweet-salty-toothsomeness of bacon, but no animals harmed!

Liquid smoke is the key to this mushroom bacon's smoky flavor. If you've never worked with this ingredient before, don't panic! It's available at most regular grocery stores.

I used to worry that liquid smoke was just a bottle full of artificial flavoring, but fear not! It's actually a totally natural ingredient.

Liquid smoke is basically the steam that naturally occurs when you burn wood. To make liquid smoke, companies just use tubing to collect that steam, which turns to condensation when it cools.

The great thing about shiitake mushrooms is that -- when you cook them until crispy -- they get a really nice, chewy texture that's similar to animal bacon.

Now you just need to add the remaining elements that make up bacon's flavor and texture:

When you're making vegan bacon, you want to hit all of those same notes using plant based ingredients.

The bacon flavoring that I use for these shiitake mushrooms is similar to the one I use in my cashew bacon. Instead of molasses and salt, though, I used maple syrup and soy sauce.

The mix of soy sauce, maple syrup, and liquid smoke hits that salty-sweet-smoky spot, and you get bacon's crisp greasiness from a dash of olive oil

Let's make some shiitake bacon, y'all!

This recipe truly could not be simpler. Start by slicing your shiitake mushrooms into pieces that are approximately ¼" thick. Those thin pieces will get crispy faster but still yield a nice, chewy inside.

Toss those mushroom slices into a bowl with soy sauce, maple syrup, and liquid smoke, tossing to coat the mushrooms really well.

Now, it's time to bake. Your baking time will vary, depending on how thick you slice your mushrooms. Just keep cooking until your mushrooms are crispy on the outside, chewy on the inside.

How to serve and store

I like to serve shiitake bacon up over vegan grits, but you can really use it anywhere you'd use animal bacon.

If you do end up with leftovers, store them in an airtight container in the fridge. They will keep for three to five days.

To reheat, toss leftovers back into a pan on medium-high heat with a tablespoon of olive oil and cook until crispy.

You can substitute other mushrooms for shiitake, if you like. I find that shiitake mushrooms give you the best texture, but any sliced mushrooms will work in this recipe!