Giving up eggs doesn't have to mean giving up crispy, tender, perfect latkes. These vegan latkes are just as delicious as their traditional counterparts without an egg in sight.

As a kid, I have many fond memories of making latkes with my family. We'd make them for Hanukkah, of course, but latkes were also a go-to when we needed a quick, budget-friendly supper.

These vegan latkes from Zsu Dever's new cookbook, Aquafaba, bring back memories of a sizzling pan and crispy, fried potato cakes of my childhood without any animal cruelty.

Zsu's newest book, like all of her cookbooks, is rock solid. Each recipe is a mouthwatering example of how aquafaba can replace eggs in cooking and baking.

You know this book is legit, because it features a foreword by Goose Wohlt, the man who discovered the magic of aquafaba.

If you've been reading this far and wondering, "What the heck is aquafaba?" Don't worry! It's not some weird, expensive ingredient. Aquafaba is the liquid that you normally rinse away when you drain a can of beans.

It's basically free, and it freezes like a dream, so you can store it now to use in recipes later. Here's a video I shot explaining a little bit more about aquafaba and showing you how easy it is to collect and store:

Zsu's book has aquafaba magic beyond these latkes, but I chose this recipe because of the nostalgia factor. She has recipes for condiments, breakfasts, lunches, suppers, and sweets.

There's also a chapter of bean recipes, because when you start cooking with aquafaba, you often find yourself with beans that also need cooking.

The book also includes a detailed shout-out to the Vegan Meringue Hits & Misses group on Facebook. This is a group of amazing vegan cooks who have been tirelessly creating and testing aquafaba recipes. This group is the reason we know how many uses aquafaba has today.

If you're intrigued about aquafaba and want to dive into cooking with this truly magical egg replacer, I encourage you to grab a copy of Zsu's book. It's truly comprehensive. 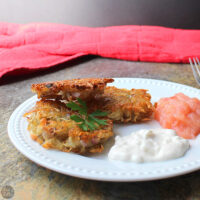 These latkes are perfectly crisp on the outside and melt-in- your-mouth on the inside. The added potato starch increases their crispiness, but it is not essential. Some russet potatoes tend to be on the drier side, but to be safe, place them in a lint-free kitchen towel, fold up the edges and give them a good wring to remove excess water. Serve this the traditional way, with nondairy sour cream and applesauce.
Prevent your screen from going dark
5 from 1 vote
Print Pin Rate
Course: Appetizer
Cuisine: Vegan
Keyword: aquafaba latkes, vegan latkes
Prep Time: 30 minutes
Cook Time: 30 minutes
Total Time: 1 hour
Servings: 6
Calories: 150kcal
Author: Zsu Dever

recipe from Aquafaba, copyright 2016 by Zsu Dever. Used by permission.