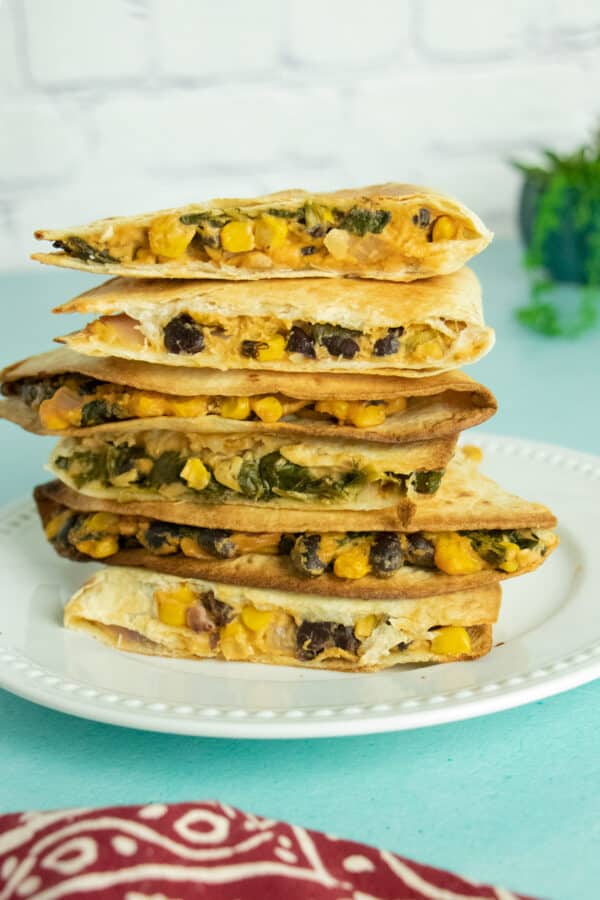 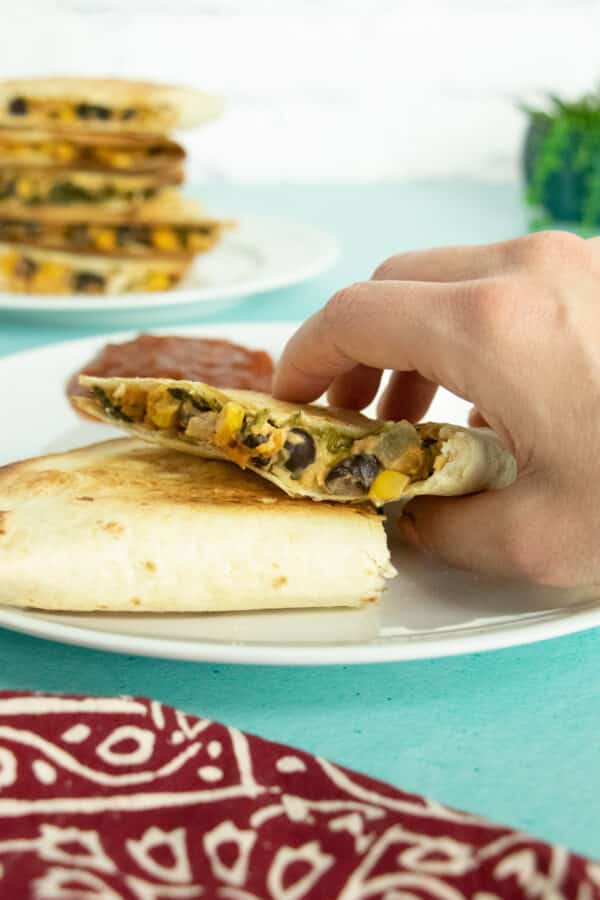 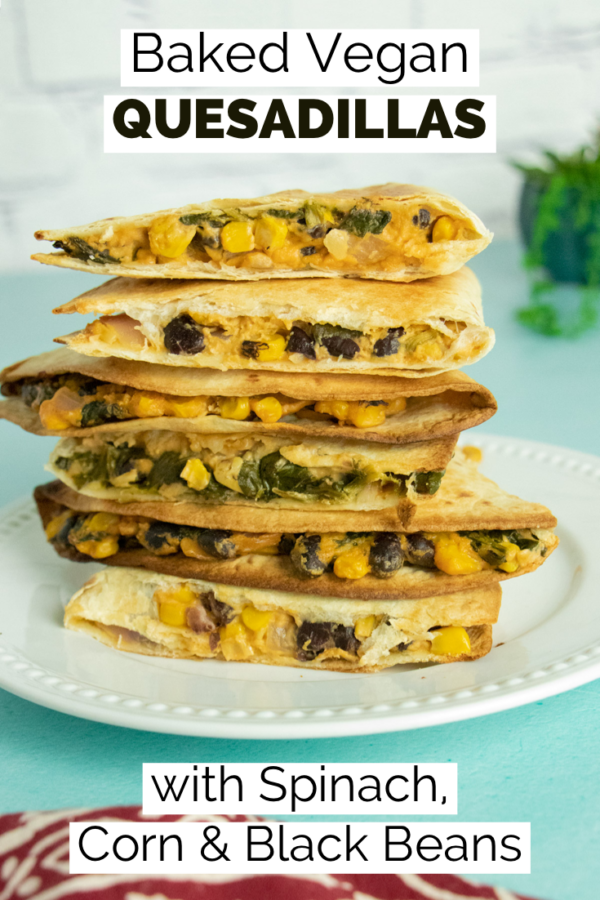 Homemade vegan queso is the star of this cheesy vegan corn and bean quesadilla recipe. These decadent vegan quesadillas are simple to make in just 40 minutes!

Y'all, back when I first went vegan in 2006, store-bought vegan cheese was the pits. We were really on our own out there, and homemade cashew queso was all the rage. These easy vegan quesadillas use my own cashew queso recipe from back then as the base.

They're a throwback recipe to the some of the best eats of old-school vegan days.

Y'all, this cashew queso might be an older recipe, but it is legit. I have served it to adults and kids -- omnivores and vegans -- and everyone loves it.

Just make sure that, if you're making this for a crowd, you label it as containing cashews for folks with allergies. Because otherwise, people may not be able to tell.

This cashew queso is seriously easy to make. You just toss soaked cashews along with salsa, vinegar, nutritional yeast, garlic, and salt into the blender.

Then, puree until your mixture gets completely smooth.

You can do this in a high speed blender in about one minute, but this is totally doable in a regular blender, too. Just keep blending, stopping to scrape down the sides every 30-60 seconds.

Let me reiterate that you should stop blending every 30-60 seconds. Not only does this give you a chance to push the goods back down toward the blade, but it gives your blender's motor a rest.

Running your blender for an extended period of time can burn out the motor, and I don't want that for you!

What can I put in a quesadilla?

This recipe is stuffed with black beans, roasted corn, spinach, and onions, but you can certainly choose your own vegan quesadilla fillings!

Here are some ideas:

Vegan quesadillas are a great produce-dump recipe. So steam or saute whatever needs eating, and toss it into the mix!

Got your queso and filling ready to go? Stir them together in a large bowl.

Now, it's assembly time. Spread a generous scoop of the mixture onto half of a large tortilla. Make sure you spread it out, and leave yourself about ¼" of naked tortilla around that edge.

Then, fold the tortilla in half, gently pressing down to flatten the top without pushing the goods out of the sides.

Repeat this process with the other three tortillas.

Transfer the quesadillas to preheated, lined baking sheets, and bake for 15 minutes, flipping once. Let's discuss that flip.

Careful flipping is key here. Slide a large spatula under the first quesadilla on the open end. Place your fingertips gently on top of the quesadilla, then flip it up and over. You're sort of rolling it gently over along the folded end.

Repeat that with the rest of the quesadillas, and use your spatula to gently flatten them a bit. Then, let them finish baking.

Then, it is crucial that you let them cool on the pan before you slice. This cheese will thin out a bit in the oven, and that few minutes of cooling time will let it set back up, so it won't all gush out when you slice.

I like to slice my quesadillas in half with a pizza cutter, starting on the open and and moving toward the folded side. You can use a knife, if you don't have a pizza cutter.

How to serve and store

You can serve these on their own -- they are plenty decadent and flavorful! But if your family loves sides as much as mine does, you can also get fancy. I like to serve these with:

If you have leftover quesadillas, store them flat in an airtight container or wrap them in foil. Reheat in the oven for 10 minutes at 350 F. They'll keep for two to three days in the refrigerator. 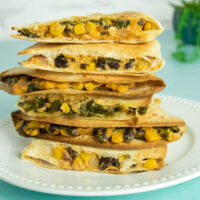 For the vegan quesadillas