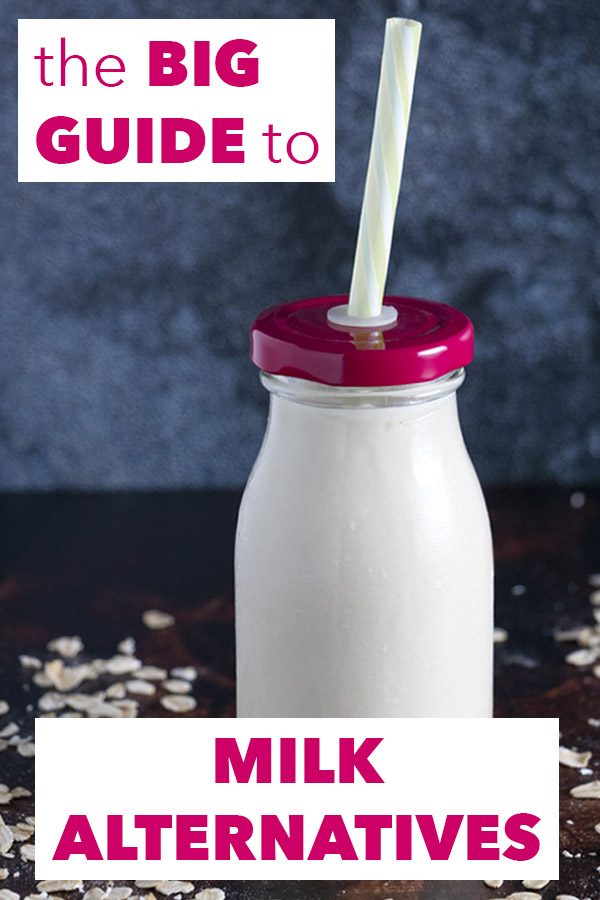 Looking for the best vegan milk? This guide breaks it down by type, brand, and use, so you can find the perfect plant milk for you!

Vegan milk has come a long way since I first went vegan over 10 years ago. Back then, soy, almond, and rice milks were really the only options available. Those are still perfectly good plant based milks, but they’ve been joined by so many other delicious options!

I'm going to start by going over your options by type, and then you can find plant milks broken out by use below that.

What are the best vegan milks?

Choosing the best vegan milk can feel incredibly overwhelming. It seems like every day a new company comes out with a new type of plant milk.

The options we will cover below are ones that I consider the best vegan milks out there:

I'll also touch on some other types of plant milks, because at the end of the day, the true "best" plant based milk depends on your personal taste, so t may take some trial and error to find your fave.

It's also important to note that vegan milk can vary as much from brand-to-brand as it can from type-to-type. That's why I include brand recommendations for the best soy, oat, and nut milks.

If one sort of soy milk isn't your jam, that doesn't mean you should write off all soy milks. I recommend starting with the cheapest option (like the store brand), then upgrading, if the first one wasn't to your liking.

Below, I break down the differences between the vegan milks out there with tips for how to make and use each one.

Soy gets a terrible reputation, based totally on myths.  A lot of the negative press about soy comes from the dairy industry.

In fact, Big Dairy is so scared of plant milks, like soy, that it lobbied Congress and the FDA to force makers of plant-based milks to remove the word “milk” from the label.

But back to soy milk. Soy milk is high in protein and delivers healthy doses of calcium and vitamin A.

Soy is one of the milks of choice in my house. My husband and I have been drinking, cooking with, and baking with soy milk for over a decade. Our eight-year-old son has been drinking soy milk since he turned one, and he is in perfect health.

Soy milk is great in coffee, cereal, baking or anywhere else you’d use a cow’s milk. Regular soy milk is one of the milk alternatives that tastes closest to cow's milk, in my opinion.

You can make soy milk from scratch. I have done it before, and it's pretty time-intensive. This is a good recipe, if you want to give it a go!

My friend Mel at A Virtual Vegan has a tried-and-true homemade oat milk recipe. She strains her oat milk twice, which makes it even work well in coffee, which you can't say for most homemade vegan milks out there.

Use oat milk in cooking, baking, coffee, cereal, or drink it by the glass. It is shockingly similar to cow's milk in both taste and texture.

There are so many nut milks out there! Almond, cashew, pistachio, macadamia…you name it!

Like soy, I find that nut milks work well anywhere that you’d use a cow’s milk. You can buy nut milk at the store or make your own. There are two ways to make nut milk from scratch:

Do not choose nut milks, like almond milk, if you’re looking to add protein or a serving of nuts to your day. As you can see from the recipes above, it doesn’t take a lot of nuts to make quite a lot of nut milk, which means there's not a lot of protein.

Homemade nut milks work well in cooking, baking, and on cereal, but they tend to separate in coffee.

Store-bought nut milk is a bit more versatile, and you can use it anywhere you'd use cow's milk.

My family prefers soy or oat milk in our coffee or tea. These milks tend to be nice and thick, and they also have less tendency to separate.

With soy and oat milk, I usually go for the store brand. They tend to be very affordable and do a great job in both tea and coffee!

Some people swear by almond milk for coffee and tea, so if soy or oat don't do it for you, these are worth a go!

For a cow's milk-style experience, soy, oat, and almond are your best bets. They're thick and have a relatively neutral flavor.

If you want something a little bit special, though, I recommend rice milk for cereal. It has a lovely, delicate flavor that enhances pretty much any cereal you pour it on.

For me, any of the options out there work fine in a smoothie. Smoothies have so much else going on, and the milk is really just there to get the blender moving.

If you are looking to your plant based milk to add protein to your smoothies, though, soy milk is the best option. Many plant milks are low in protein, but soy packs a nice protein punch.

For me, soy and oat milk are the best vegan milks out there. Nut milks, like almond, will do in a pinch.

But, like I mentioned earlier, part of choosing the best vegan milk is up to your own personal tastes. If my faves don't do it for you, try these!

Hemp and flax milks are also popping up on shelves now. Hemp milk delivers a good dose of protein and iron in a single serving. Flax doesn’t provide any protein, but it does offer calcium and is low in calories.

Seed milks have a less neutral taste than soy or nut milks, in my opinion. Some people find the taste off-putting, but others enjoy it. I also find that they are thinner than the vegan milks we've already covered.

They'd work fine in baking and in cereal, if you like the taste.

There are several types of coconut milk out there, and choosing the right one can be confusing. If you’re looking for a cow’s milk replacement, you want the boxed coconut milk intended for drinking, usually labeled "Coconut Milk Beverage".

Like nut milk, don’t look to coconut milk beverage for your protein needs.

You can also buy canned lite or full fat coconut milks. These are both thicker than the coconut milk beverage and intended for cooking things like coconut soup or curry. Lite coconut milk is just thinned coconut milk, sometimes with a thickener added to make up for the missing fat.

Lite and full fat coconut milks are great for baking and for making creamy soups and curries. Full fat coconut milk is a great replacement for dairy if you’re making ice cream, as long as you don’t mind a coconut edge on the finished product.

Go Dairy Free has a great guide to coconut milks and where to use which type, if you want more information on the different coconut milk varieties.

Rice milk tends to be the thinnest of the milk alternatives and doesn't contain a ton of nutrition. It has a unique, sweet flavor from the rice that I find really pleasant, though.

I love rice milk for sipping or in cereal. For baking or to lighten coffee and tea, I'd recommend going with something thicker.

What's your favorite type of vegan milk? Did I miss one that you absolutely love? Tell me all about it in the comments!

What is vegan milk?

Vegan milk is a blanket term that covers any milk alternatives made from plants.

There are dozens of non-dairy milks out there, but in general, to make plant milk, you simply puree the nut, seed, bean, or grain with water, then strain out the solids. The resulting liquid is milk-like in texture, though thickness will vary based on ingredients and the specific technique you use.

Most store-bought non-dairy milk uses thickeners to give the vegan milk a texture more like cow's milk. They also usually include ingredients to prevent the remaining solids from separating and a touch of sweetener.

Why does most plant based milk contain sugar?

A cup of 2% milk, for example, contains 12.3 grams of sugar. That's more sugar than you find in half a Hershey's Bar.

Soybeans, almonds, oats, and other popular bases for milk alternatives, on the other hand, tend to be very low in sugar.

If you want your vegan milk to taste like cow's milk, you need to sweeten it. The truth is, many plant based milks contain less total sugars than cow's milk does.

Plant-based milk on the pod!

In this episode of Talkin' Tofu, we cover a lot of ground, including a discussion of our favorite (and least favorite!) plant-based milks.