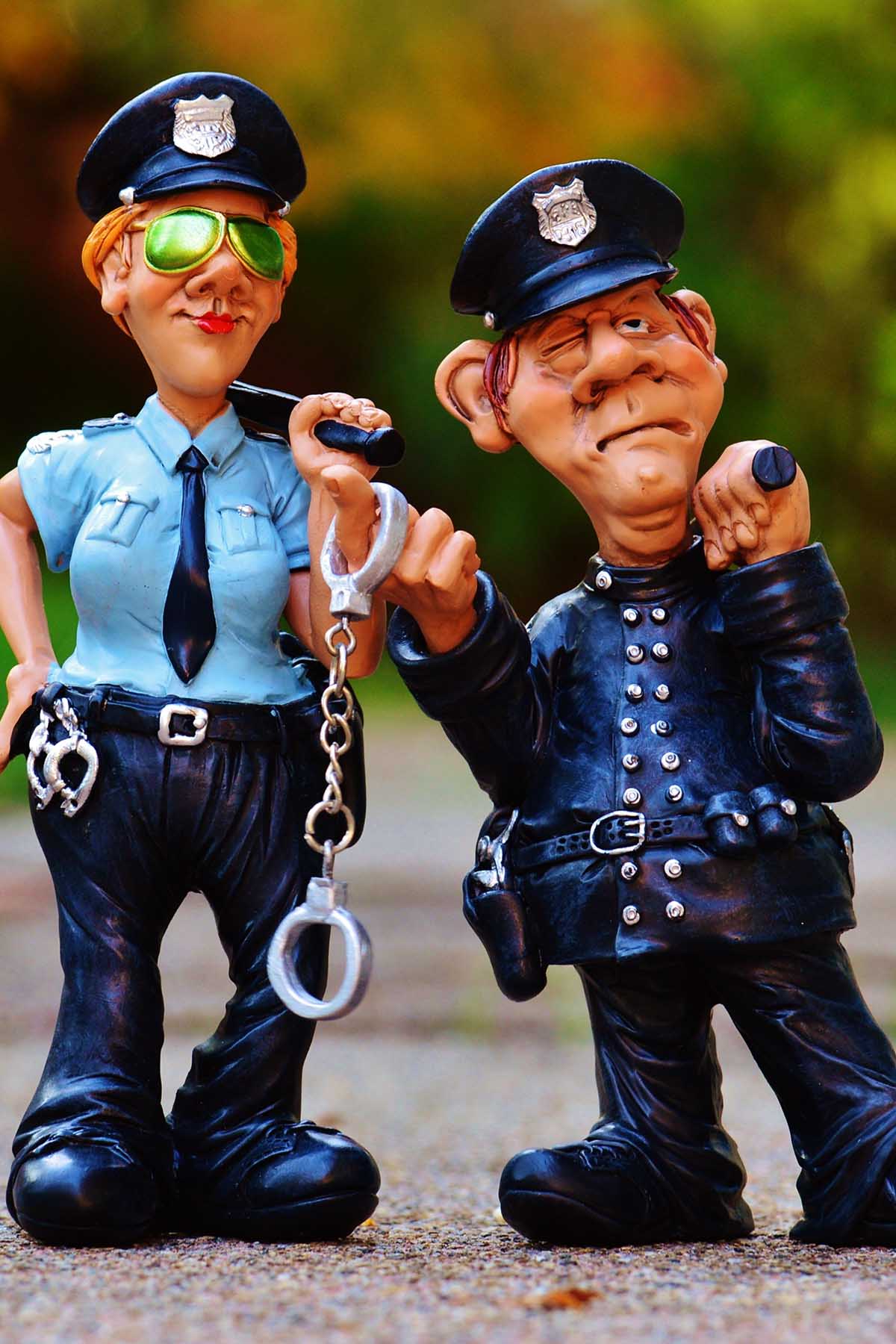 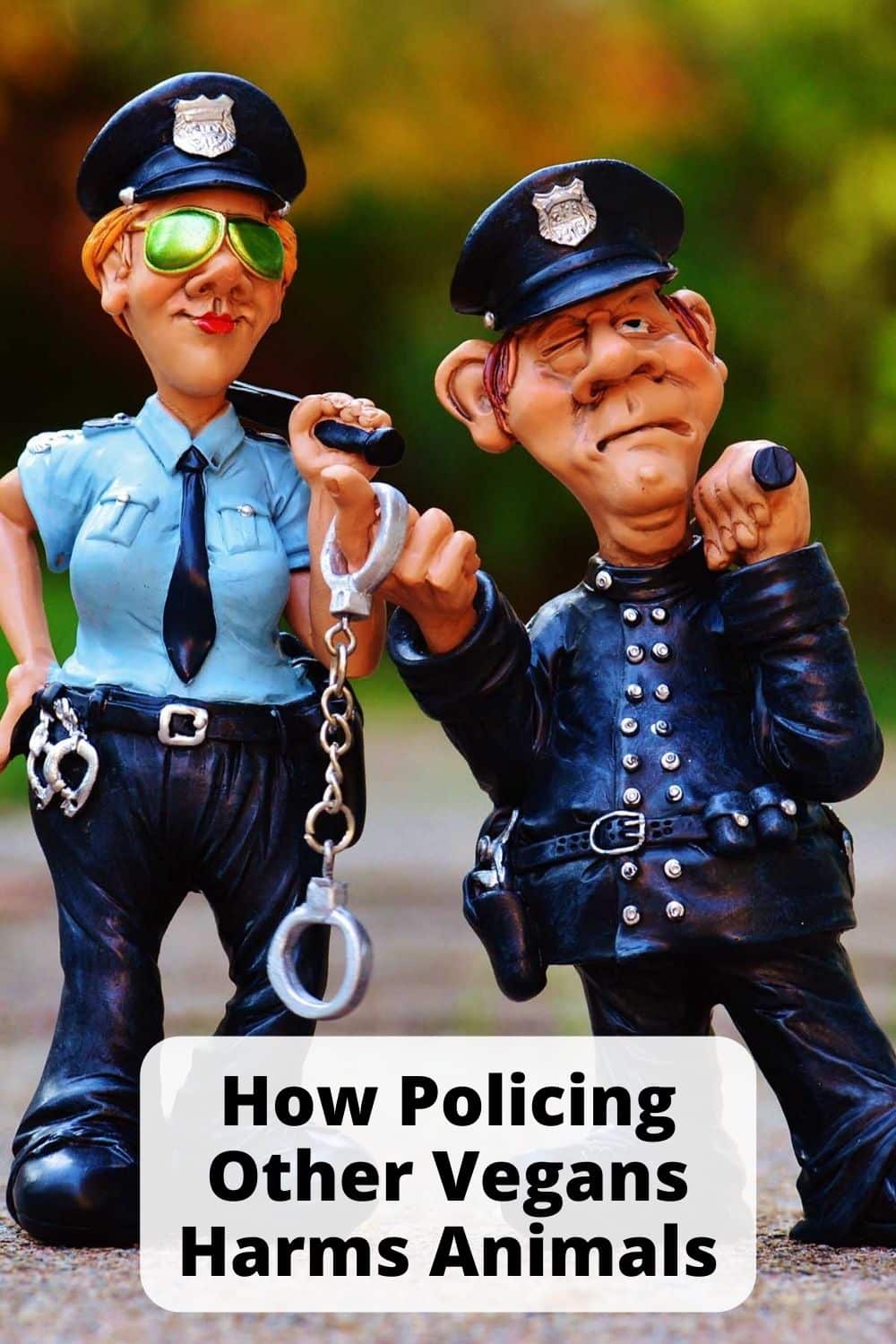 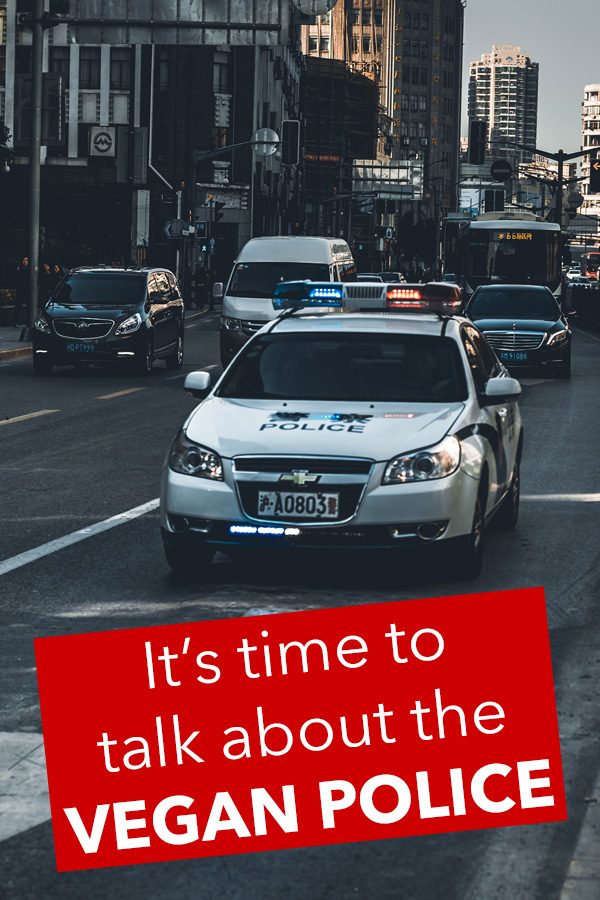 Hello, fellow vegans! It’s time for us to stop yelling at each other and focus on the animals. Let's discuss our vegan police problem.

I’ve been vegan since 2006 have seen the vegan movement change a lot in that time. When I first went vegan, vegan cheese was an abomination, finding a plant-based milk option at a coffee shop was a miracle, and we didn’t even have aquafaba yet.

Overall, being vegan today is pretty easy, by comparison. The hardest thing about being vegan now is dealing with the vegan police. Let’s talk about it.

There are vegan police??

Obviously, there’s not a squad of badge-wielding vegans coming for your veg-card if you accidentally drink coffee with half and half in it.

The vegan police lurk undercover, often online, and they are waiting for a chance to tell their fellow vegans that we aren’t vegan enough.

These are the vegans who will shame you for using sugar (even when you’re careful to choose vegan sugar). The ones who push the myth that figs aren't vegan.

They also like to rail against vegans who eat meat and cheese alternatives, because these foods are often highly processed. Which they can be. But they’re also not made from animals, which means that they’re still vegan.

And god forbid you’re a vegan who drinks alcohol! Is that sirens I hear?

This kind of gatekeeping hurts the vegan movement.

After 16 years of eating vegan, I’ve watched health-shaming seep deeper and deeper into the movement, and it’s worrisome. This infighting makes veganism seem cliquish and unapproachable, and that ultimately harms the animals we are trying to protect.

This hyper-vigilance about health puts a lot of people off of veganism.

Giving up animal products is a huge lifestyle change for many people. Why restrict the definition of vegan even further?

If a bag of vegan chicken tenders and a pint of dairy-free ice cream makes it easier for someone to stop eating animals, what’s the benefit in harassing them about it?

What does vegan really mean?

Food is personal, I get it. Some people don’t go vegan solely to save animals, but ultimately, that’s what veganism is about at its core.

Veganism isn’t a crash diet, a cleanse or a weight loss plan.

Here’s the official definition of veganism, straight from The Vegan Society:

“Veganism is a way of living which seeks to exclude, as far as is possible and practicable, all forms of exploitation of, and cruelty to, animals for food, clothing or any other purpose.”

Short, and to the point, but there are a couple of important things to unpack in this brief definition of veganism.

Vegan doesn’t have to mean healthy.

You’ll notice that human health isn’t mentioned anywhere in that definition. Yes, humans are animals, and I’ve heard the vegan police argue that our health matters, which is why health-shaming is a cool move.

I reject that argument. The difference between a human eating a vegan cupcake and a cow headed to slaughter is that the human has a choice.

If you’re eating vegan for your health, more power to you! It’s awesome if you want to strive for a super healthy vegan diet, but you don’t have to police other vegans who may have chosen this lifestyle for purely ethical reasons.

Their cupcakes aren’t harming you or any animals.

Let's talk about 'possible and practicable'

I have also seen folks question whether things like medications, which were probably developed through animal testing, are vegan. That’s where “possible and practicable” comes in.

It’s one thing to shop for vegan shampoo. There are lots of options available, and you don’t technically need shampoo to survive.

When it comes to things like life-saving medications or other essentials where there aren’t 100 percent pure vegan options, we get a pass.

It's time to turn in the badge.

We need to remember what we’re here for and support our fellow vegans. That means keeping our criticisms to ourselves and being compassionate—not judgmental—when someone does slip up.

There are lots of ways to approach veganism, and that’s great, because there are lots of different kinds of people in this world! At the end of the day, vegans are just humans doing our best to protect animals.