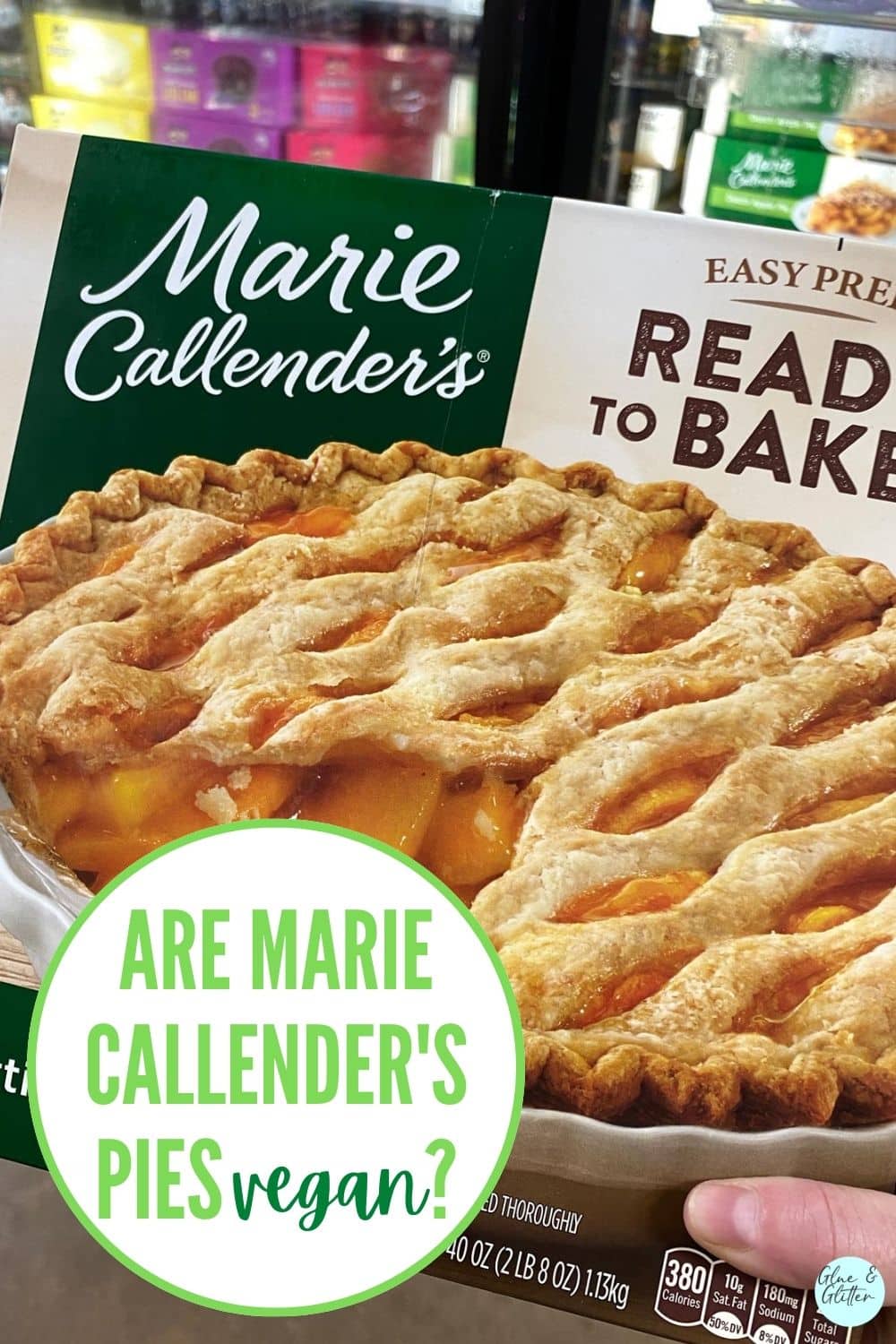 Wondering which Marie Callender's Pies are vegan? Save this list for your next shopping trip!

Which Marie Callender's Pies are vegan?

As a rule of thumb, their fruit pies are accidentally vegan, but pies with fillings like cream or meringue are not.

Here's an alphabetical list of which Marie Callender's pies are vegan, as of this writing:

Unfortunately, as of this writing, Marie Callender's Pumpkin Pie is not vegan. It contains both egg and milk.

Listen to our podcast episode that includes this review or read it below!

Dave went first this week, because he had incredibly strong feelings about this peach pie. Those feelings were: he hated it. He said that the rim of the crust was too chalky and that he'd rather eat a peach on its own.

He did admit that he has this issue with the crust rim -- like the edge where the crust meets the pie plate -- on most pies. But he felt it was even more present in this pie.

After he ranted at length about this pie, I got to reveal that I loved the whole thing! The top crust was flaky, buttery, and had a crunchy sugar topping.

The peach filling was the real star for me, though. Fruit pies in general, and frozen fruit pies especially, tend to have a very soft filling. But the peaches in this pie still had a little bit of toothsome bite to them. That's not easy to achieve, and I appreciated it!

On a more recent episode of the pod, we decided to revisit Marie Callendar's vegan pie. This time, I picked up her Strawberry Rhubarb Streusel Pie.

Dave went into this pie tasting with no idea what rhubarb even is. Rhubarb is a spring vegetable with pink stalks and dark, green leaves. Rhubarb leaves are poisonous, but the stalks are safe to eat. On their own, they're very tart, and you sweeten them to add them to pies.

I thought this was a solid pie! The streusel was sweet and crunchy, and the sweet strawberries were a nice contrast to the sour pieces of rhubarb.

Dave did not care for this. Not only was he afraid to eat it, because he'd just learned that rhubarb is poisonous, but he thought it just tasted like a strawberry pie. He likened the filling to jelly.

I could not disagree more!

In hindsight, I don't think he actually got any rhubarb in his bite of pie, because he didn't say a thing about the sour flavor and firmer texture of the veggie.

Overall, if you like strawberry rhubarb pie, this one is a solid option.

Have you had any of the Marie Callendar's fruit pies? I've had the cherry, apple, and now peach and strawberry rhubarb and enjoyed them all. How did you feel about them?

Thank you so much for listening (or reading!). We record these episodes for you, and we'd love to hear from you.

Got a favorite vegan treat that you think we should cover on the podcast? Send your suggestions to [email protected]!

You can find Talkin' Tofu on: