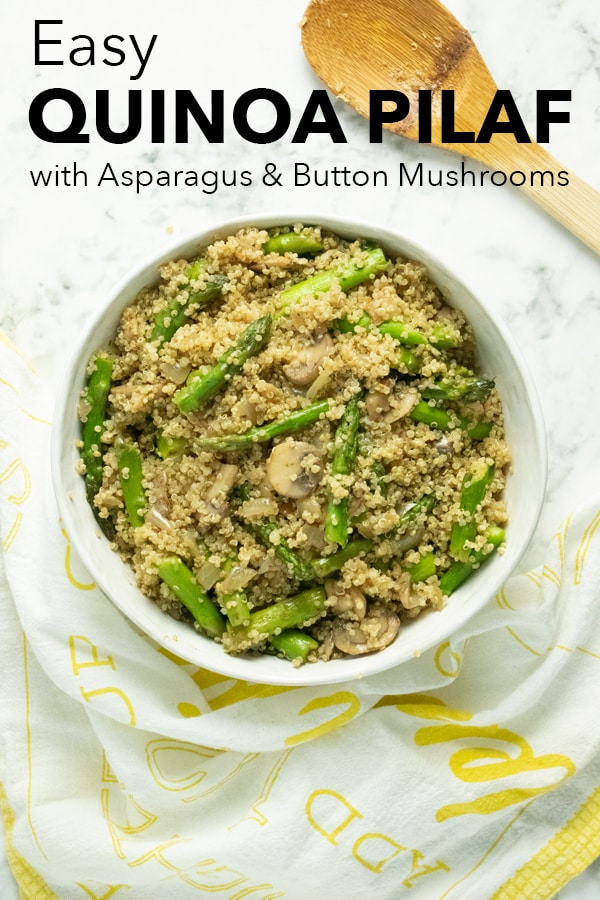 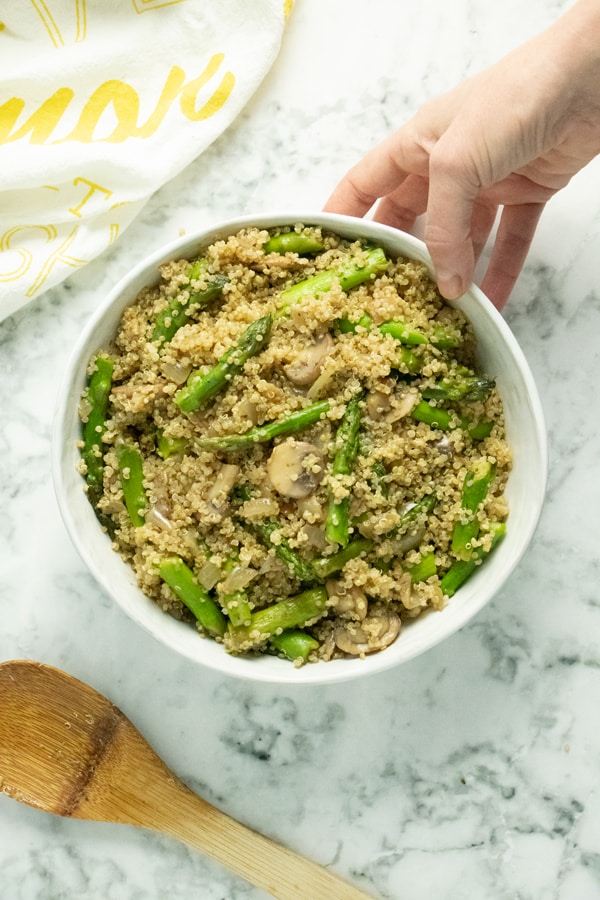 Quinoa pilaf is simple to make and so satisfying. Tender, nutty quinoa teams up with sauteed veggies and bright lemon in this crowd-pleasing side dish.

I love an easy quinoa dish! My kid isn't a fan of quinoa, so I tend to cook it up in easy lunches for myself during the week. That way, I get my quinoa fix without dealing with complaints at the dinner table

This quinoa pilaf recipe is super simple to make. Just saute the veggies while the quinoa cooks, toss it all together, and eat! For lunches, I tend to eat this as an entree, but traditionally you'd serve this as a side with grilled or roasted protein. There are serving suggestions at below, if you need ideas for what to serve with this.

Before we get down to cooking, let's talk a little bit about what makes a pilaf a pilaf

What is a Pilaf?

I'm sure you've heard of rice pilaf, but you can also make pilaf using other grains, like bulgur. This recipe uses quinoa, which is actually a seed but cooks up like a grain.

Pilaf is a pretty broad term for flavorful rice or other grains cooked in broth with spices.

Before adding the liquid, some pilaf recipes have you toast the grains in oil. For the sake of simplicity, my pilaf recipe skips the toasting.

If you'd like to toast your quinoa, though, it's easy! Just add a tablespoon of oil to the pan and cook the dry grains, stirring, until they smell nice and toasty. Then add the broth and cook as usual. You can even do this in the Instant Pot using the saute function.

In this recipe, I'm using quinoa in place of the more common rice. I love how quinoa's nutty flavor pairs with the earthy mushrooms and tender asparagus!

For this quinoa pilaf, I made the quinoa in my Instant Pot, but you don't need an Instant Pot to make this recipe. Learn how to cook quinoa three different ways right here. You can make it in the Instant Pot, in a rice cooker, or on the stovetop.

Like I mentioned above, you can opt to toast or not toast the quinoa before adding the liquid to the pot. See the section above for toasting instructions. If you're using a rice cooker, you'll need to toast your quinoa in a pan, since most rice cookers don't have a saute function.

Making the Mushrooms and Asparagus

While the quinoa cooks, prepare the vegetables, so you'll be ready to toss everything together when that cooking time is up.

I like to save time by buying pre-sliced button mushrooms. They usually cost the same as unsliced and save you a few minutes of prep time. The prep time in the recipe card below assumes you bought pre-sliced mushrooms.

The only real prep you need to do here is chop the onion, mince the garlic, and prepare the asparagus.

Chopping onion and mincing garlic are pretty simple, so let's just talk about the asparagus. Asparagus stems tend to have a woody part near the bottom, which you need to remove before cooking.

You can slice the woody portion away, but even easier and more precise is to use your hands. The stem should snap off right where the woody part meets the tender part of the stem.

Then, cut the asparagus into 1 ½" pieces.

When the quinoa finishes cooking, toss it into the same bowl, add some lemon juice, mix well, and eat!

How to Serve Quinoa Pilaf

I've actually eaten this dish as an entree, but chances are you're looking to use this as a side dish. Here are some ideas for proteins you can serve with it:

It's also nice cold the next day as a salad for lunch.

However you serve it, I know it's going to be a hit! 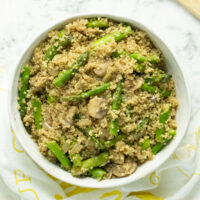 For the Finished Quinoa Pilaf