Who needs pasta to make salt and pepper pasta? Not you, my friend. Not you. You only need four ingredients and about 30 minutes to make this recipe!

Not only is this vegan salt and pepper pasta sauce healthier than the conventional variety, but you dish it up over zoodles instead of regular noodles! This recipe is uncharacteristically healthy for me, and I'm into it!

I feel like salt and pepper get kind of short shrift when it comes to seasoning. When you're counting how many ingredients are in a recipe, for example, it's totally acceptable to not count salt and pepper, because everyone has this in their kitchens. That's right: you treat them like something as obvious as water.

They're so universal that we tend to overlook them entirely. And they're universal for a reason: they make food taste better. So! When my sister mentioned that she's obsessed lately with salt and pepper pasta, I couldn't resist trying to create a vegan version for her.

This cooking adventure felt like a great chance to bust out my Spiralizer. Because what would be more fun than trying to make salt and pepper pasta without any actual pasta?

The one trick with this modification is that traditional recipes for this dish use the starchy pasta cooking water as the sauce base. Without it, you end up with a runny, bland sauce.

It was time to improvise.

I started by making an oil and nooch salt and pepper sauce. This worked pretty well, but I feel like it didn't stick to the noodles as well as I liked, and it relied too much on nooch to replace the starch for thickening.

Then, I realized that the answer was staring me in the face the whole time: cashews! Because you can't think "creamy vegan sauce" without thinking "cashews!" A salt and pepper cashew cream was the answer. The rich, decadent answer.

This recipe is super, super simple, y'all. I think you're going to love it. 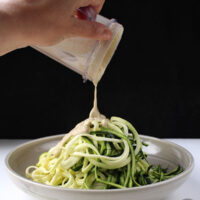