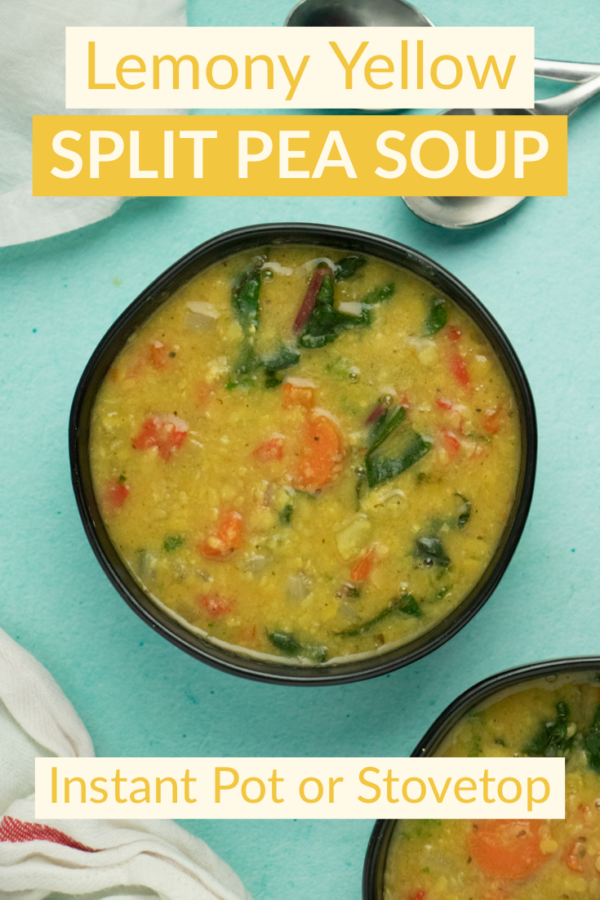 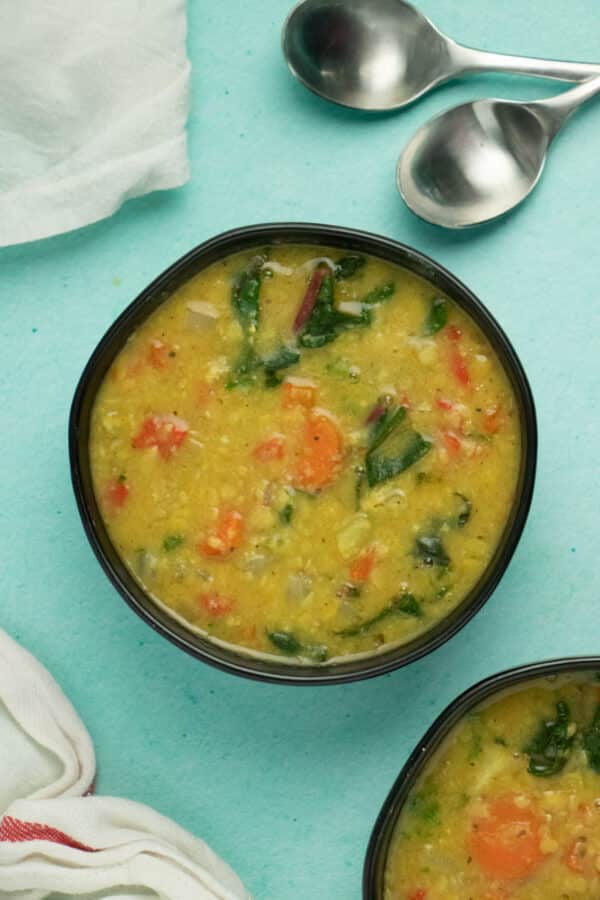 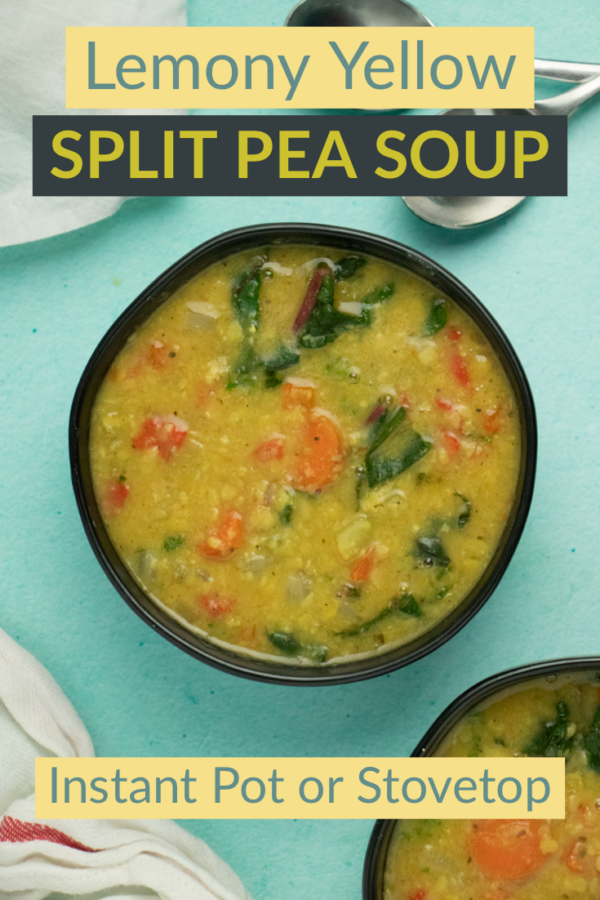 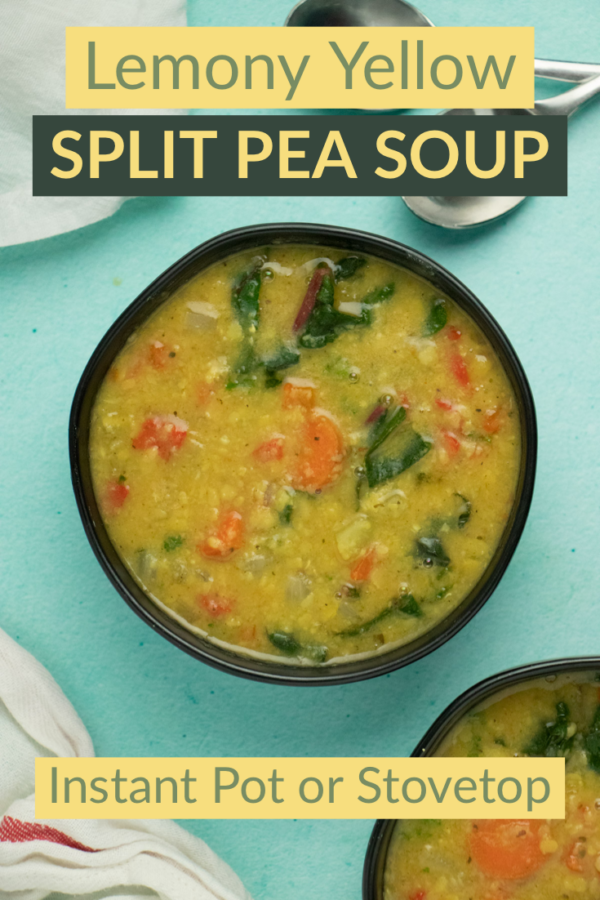 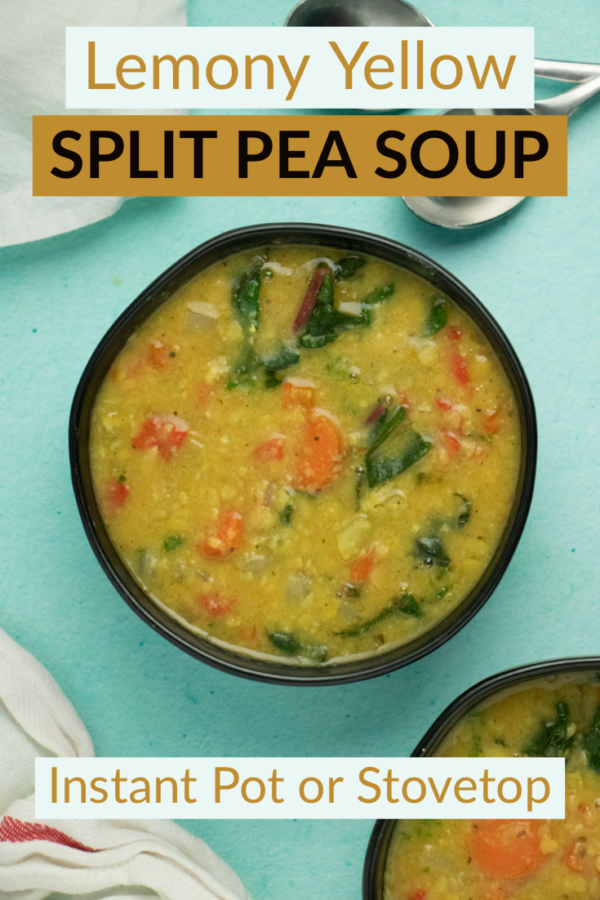 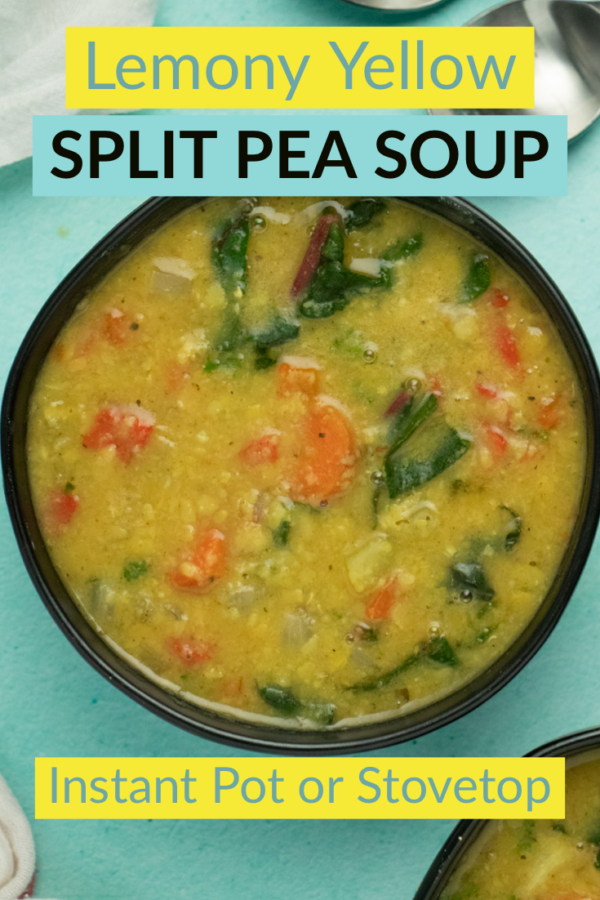 Earthy yellow split pea soup with bright lemon and plenty of greens is a hearty, one-bowl meal that you will want to make again and again.

This yellow split pea soup recipe is from Michelle Schwegmann and Josh Hooten's new cookbook, "Eat Like You Give a Damn". The book gives you stovetop directions, and I've added Instant Pot directions, for anyone who wants them!

This soup is easy to make. It's also:

I just know that it's going to become one of your new go-to recipes.

I got my hands on Michelle Schwegmann and Josh Hooten's new cookbook.

Y'all, I've been ogling this book for months, so when the publisher offered me a review copy, I jumped for joy! Eat Like You Give a Damn is beautiful, and I love the intro chapters as much as I love the delicious recipes in its pages.

Schwegmann and Hooten are ethical vegans and the owners of Herbivore Clothing Company. They're vegan for the animals, not necessarily for health reasons. As someone who went vegan for health and stuck with it for ethical reasons, this book really spoke to me.

The introduction recounts one animal activist's journey to veganism, including a heartbreaking undercover investigation of a factory pig farm that changed her life. I'm not going to share the details here, because that's not what I do. But if your answer to "Bacon had a mom," is "Bacon is delicious," I hope that you'll seek out this story.

The intro also includes a foreword from one of my food heroes: registered dietician Ginny Messina, aka The Vegan R.D.  Ginny gives a great intro to vegan nutrition, including:

From there they walk you through Schwegmann's own reasons for going vegan and why we all should give a damn about animals and the planet. There's also a handy Vegan Debater's FAQ, for the inevitable questions you'll get and a guide to stocking your vegan pantry.

My favorite part, though, is the section "It's Okay for Vegans to Love Meat and Cheese". We are people, and chances are we grew up eating these foods. You can like a thing and not eat it. You can also find some really awesome alternatives to animal meat and cheese that are satisfying without the side of cruelty. Seriously, I could not have loved that section more.

The intro material is informative and sometimes a little bit heavy, but most of the book is packed with delicious vegan recipes. If you're considering going vegan, I can't recommend it enough!

What are yellow split peas?

Split peas really are what they say they are: dried peas that are split in half. The splitting makes them cook more quickly than the whole legume.

Yellow split peas are a bit less sweet than their green cousins, but otherwise, they are very similar to green split peas.

About the broccoli stalks

This recipe calls for broccoli stalks, which is the ingredient that drew me to this recipe. Did you know that you can totally eat those big ol' stalks? They're good for more than just broth! I cook with them often and was so happy to see another recipe that uses them!

To prepare broccoli stalks for cooking, chop off the woody end, then use your knife to peel away the tough outer skin.

Then, chop them just like you would any other veggie. I have been using the stems in stir fries and soups, and I'm glad to add another broccoli stem recipe to my arsenal!

Making the soup on the stovetop

Whether you make this in the Instant Pot or on the stovetop, though, it's incredibly easy.

Start by sauteing onion, garlic, carrots, broccoli stalks, and bell pepper.  Then, add the herbs, just to get them toasty and fragrant.

Then, add the yellow split peas, water, and broth, and simmer until the soup thickens and the peas start to fall apart in the pot.

Just before serving, add plenty of Swiss chard, which wilts down into the soup in just a few minutes. Right before you dish this up, stir in fresh parsley and lemon juice.

Making the soup in your Instant Pot

In Eat Like You Give a Damn, this recipe is strictly stovetop, but I decided to convert it to work in my pressure cooker. Because y'all, I love my Instant Pot!

This soup is even easier in the Instant Pot. You add onions, garlic, dried herbs, yellow split peas, water, and broth to the pot. Cook at high pressure for 18 minutes with a 10-minute natural release.

After you release the pressure, stir in the Swiss chard, until it wilts down into the soup. Just before serving, stir in fresh parsley and lemon juice. 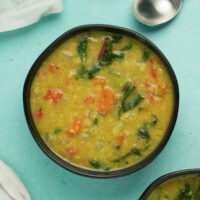