This recipe is sponsored by ZenChef. All opinions are 100% my own.

Thick, rich, creamy Vegan Pressure Cooker Broccoli Cheese Soup is a snap to make. And you only need half an hour to whip it up for dinner tonight!

Is there anything cozier than a big ol' bowl of vegan broccoli cheese soup? It's warm, filling, veggie-packed comfort food. Even my soup-shunning child likes this soup!

My favorite part about this recipe is how easy it is to make in the pressure cooker. It uses the pot's saute function to turn this soup into a super easy, one-pot meal that's a total crowd-pleaser.

Just saute your onion, cook your soup ingredients, and use the saute function again to melt the vegan cheese and warm the vegan milk. Easy peasy, and supper is on the table in about 30 minutes!

About My Pressure Cooker

You can use the ZenChef Multifunctiona Pressure Cooker to:

The pot also has a bunch of presets for things like rice, beans, and soups and stews. You can really throw food in, press a button, and walk away until supper is ready.

Back to the Broccoli Cheese Soup!

I wouldn't call this recipe health food, but I do make a little bit of an effort to get creaminess into the bowl without adding vegan creamer. This soup gets a lot of its creaminess from the vegan milk and vegan cheese, but it also takes its hearty texture from red potatoes.

The red potatoes cook up in the pot with the broccoli and other veggies, and they turn nice and smooth when you puree. The carrots get pureed, too, so your soup has a hint of delightful sweetness.

It's a real treat to eat!

I definitely recommend using red potatoes or another thin-skinned potato in this recipe. The potato's job is to add creaminess when you puree your soup, and a russet (aka Idaho potato) isn't going to do the trick. I love russet potatoes, just not for this purpose.

Ready to make a big batch of pressure cooker broccoli cheese soup? Me too. Let's cook! 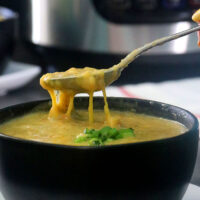 Adapted from 365 Days of Slow Cooking