These vegan meringue cookies are light, crisp, and sweet with absolutely no beany taste at all. And they're simpler to make than you'd think!

This is my second adventure in making vegan meringue. This time, I whipped up some simple vegan meringue cookies using white bean aquafaba.

These vegan meringue cookies are made with aquafaba, the liquid from canned beans. Aquafaba is a great egg replacer, and it works like a charm in meringue recipes!

Chickpea aquafaba is the most popular, but you don't have to use the liquid from canned chickpeas. For recipes with a more delicate flavor, white bean is your friend.

Since first tasting chickpea meringue, I knew that I wanted white bean to be my next meringue experiment. The vegan meringue group had a post on white bean, and it was unfortunately a total miss. BUT! The person who had the fail suspected that this was because white beans give off less liquid than garbanzo beans, and their stand mixer couldn't reach enough of the goods.

Since I'm using an electric hand mixer instead of a stand mixer, the level of bean liquid wasn't a problem. If you're using a stand mixer and things aren't working out, try doubling the recipe to get more initial volume.

Chickpea meringue has a slight beany taste, and I am happy to report that white bean liquid makes a much milder vegan meringue! These cookies were crisp, sweet, and not at all beany.

White bean liquid takes a lot longer to form peaks than chickpea does. Expect a good 25 minutes of beating on high. The chickpea meringue took closer to 15.

But that extra 10 minutes is so worth it for the improved taste!

You will want to eat these meringues pretty much right away. Mine sat out in a sealed container on the kitchen counter yesterday, and they went from crispy to chewy in a few hours. This is definitely not a make-ahead recipe.

What to do with the leftover white beans

When you make meringues with aquafaba, you're left with lots of beans. If you need a recipe for your white beans, try these!

But that's enough about beans. Let's make some cookies! 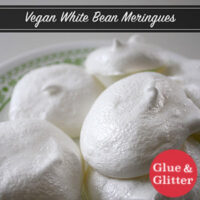 Make sure that your bowl is squeaky clean before you start cooking. Any residual oil will interfere with you getting those good, stiff peaks.