Vegan Mexican Pizza loaded with all of the toppings is healthier (and more delicious!) than its fast food cousin.

When I was in high school, I was on the Academic Games team (nerd alert!). I was actually not great at the games themselves, but I was great at stopping at Taco Bell for a Mexican Pizza on the way to every. single. game.

Seriously, y'all, I was obsessed with Mexican pizzas! When I went vegetarian at 16, I learned that I could still eat my fast food fave by asking them to leave out the beef crumbles. But there was no great vegan Mexican Pizza option on their menu.

I mean, really, it was all about that gooey cheese. At least, it was for me.

I went vegan in 2006, which means that I've spent over a decade without Mexican Pizza in my life. Then, the other day, out of nowhere, a Mexican Pizza craving hit me, and here we are.

This recipe is seriously simple, and you can alter it to suit your tastes.

Start with small tortillas. For the most Taco Bell-like experience, choose white tortillas, but you can use wheat or even corn, if that's your jam. I won't judge you.

To keep this recipe easy, I'm using canned refried beans and canned enchilada sauce. If you want to make these things from scratch, by all means, go for it! I applaud you. Whatever you decide to do, slather the beans, sauce, and vegan cheese between a couple of those small tortillas.

Now, you've basically got a refried bean sandwich, and you're ready to top! The recipe below calls for adding some toppings before cooking and some after. Feel free to mix this up with whatever toppings are calling your name!

The only critical toppings, as far as I'm concerned, are the enchilada sauce and the vegan cheese. Other than those, you can follow your tastebuds.

Once you've topped your Mexican Pizzas, toss them into the oven, and bake to crispy, cheesy, saucy perfection. Then, use a pizza slicer to cut them into quarters before serving. 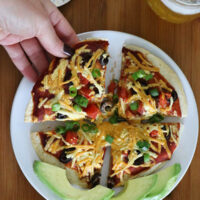 *You will have beans and enchilada sauce left over, and that's ok! Freeze them for later in a freezer-safe container. **This is key, because if the top isn't flat, your top layer of sauce will ooze right off of the edge.