Over the weekend, the amazing Holly from Veganadian threw a vegan potluck to celebrate Dough Bakery's first year in Atlanta, and these mini loaded baked potatoes were my contribution. 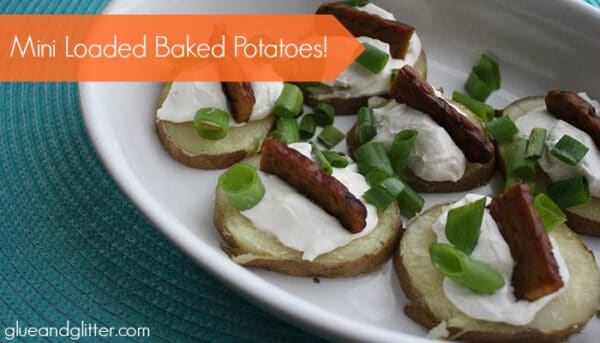 Dough is an awesome vegan bakery here in Atlanta's Inman Park neighborhood. Not only do they have awesome baked goods, but inside dough is Gutenfleischers: a fully vegan sandwich counter. I did an interview with Simon, one of the owners of Gutenfleischers, if you want to learn a little bit more about them. Both Dough and Gutenfleischers are amazing. If you live in Atlanta or are here for a visit, I recommend eating here at least once. If not 15 times.

The food at the potluck was amazing, and I don't think I even have space to put all of my photos up here, so I'll just share some of my faves! 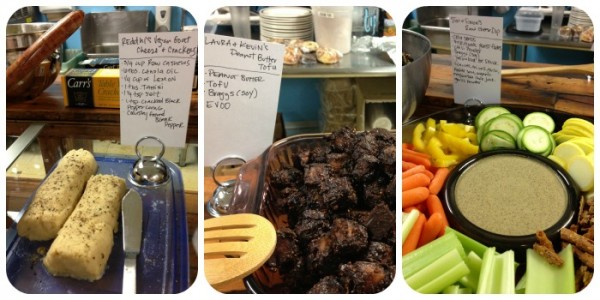 There was way too much good food to share it all with you. Seriously, I filled up two plates with tiny servings and still am pretty sure I didn't have room on those plates to try all of the amazing dishes that folks brought. The photo above is of three that really stood out for me: Reddhi's cashew-based vegan goat cheese, Laura and Kevin's peanut butter tofu, and Star and Simon's spicy chia cheese dip. There are not words, y'all!

The method in this recipe is a best guess based on other cashew-based vegan cheeses that I've made. If she did any kind of fermentation or baking, then this recipe might not turn out like the cheese from the potluck. I'm 95% sure that you'll still end up with a super tasty spreadable cheese, though! If anyone knows more about making vegan goat cheese, I would love to know! 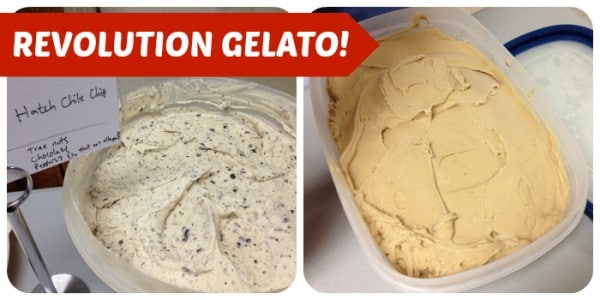 I met Jared from Revolution Gelatos a few years ago at another vegan potluck, and his gelatos were the talk of this year's Atlanta Veg Fest. I didn't make it to his table at Veg Fest, and it was great to see him and try his awesome gelatos again! They were pretty mind-blowing before, and he's been working on his recipe. Somehow, they're even more creamy and delicious than before! He had Hatch Chili Chip, which was a little bit spicy, and a Coffee variety. They were both fabulous!

Holly not only pulled together the Atlanta vegan community to contribute dishes, but she also organized a raffle to benefit a local animal rights organization and sent us home with beautiful little goodie packages. They're still deciding on a group to benefit, but I heard folks mentioning LifeLine Animal Rescue, and I hope they get our money! If you follow this blog you know that LifeLine saved my dog's life. The goodie packages contained a vegan lip gloss from Crazy Rumors, a keychain from The Vegan Dish, and a bag of coconut bacon!

I had a great time at the potluck, and I was also totally flattered that so many folks liked my dish. There was so much amazing food, and I'm glad that I was able to contribute. Speaking of my dish! Here is how to make it!

I kind of realized at the last minute that I could make it to this potluck, so I wanted a recipe that was delicious but also fast. This recipe uses a lot more processed foods than I normally use in my cooking. I think of this as more of a decadent treat than an all-the-time snack.