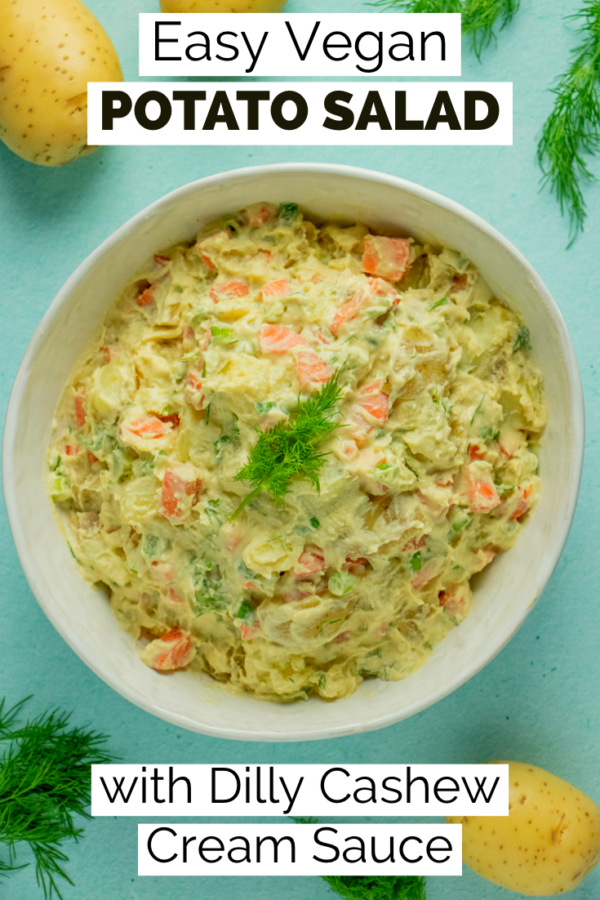 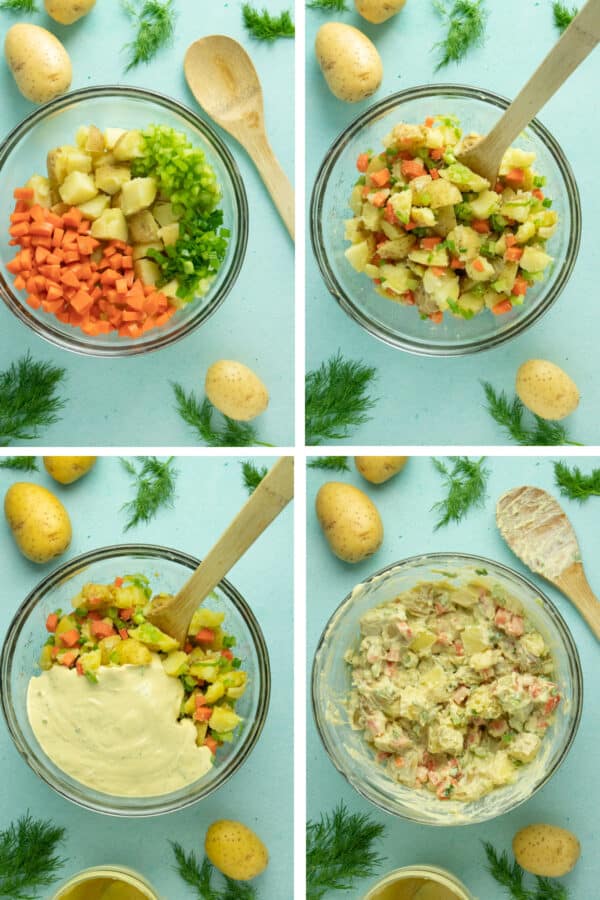 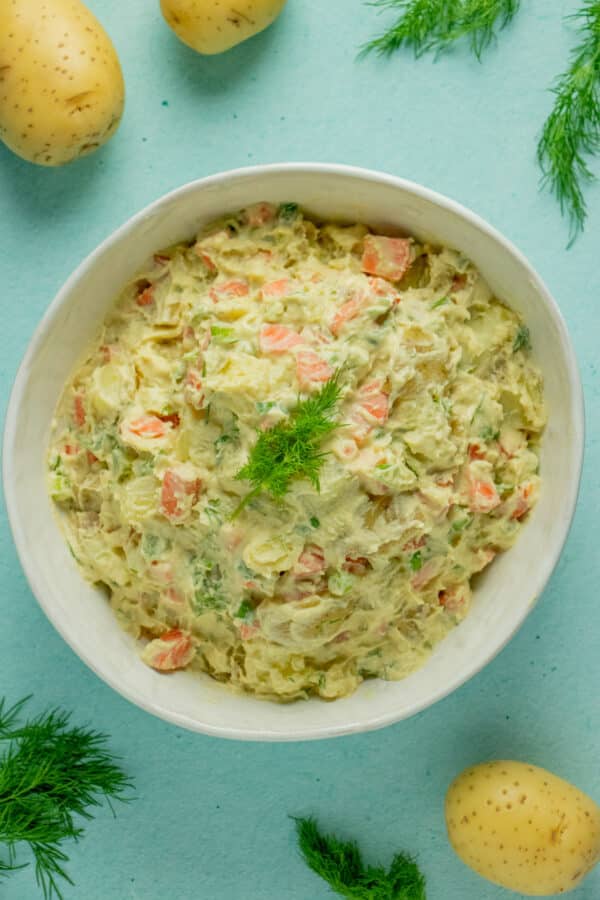 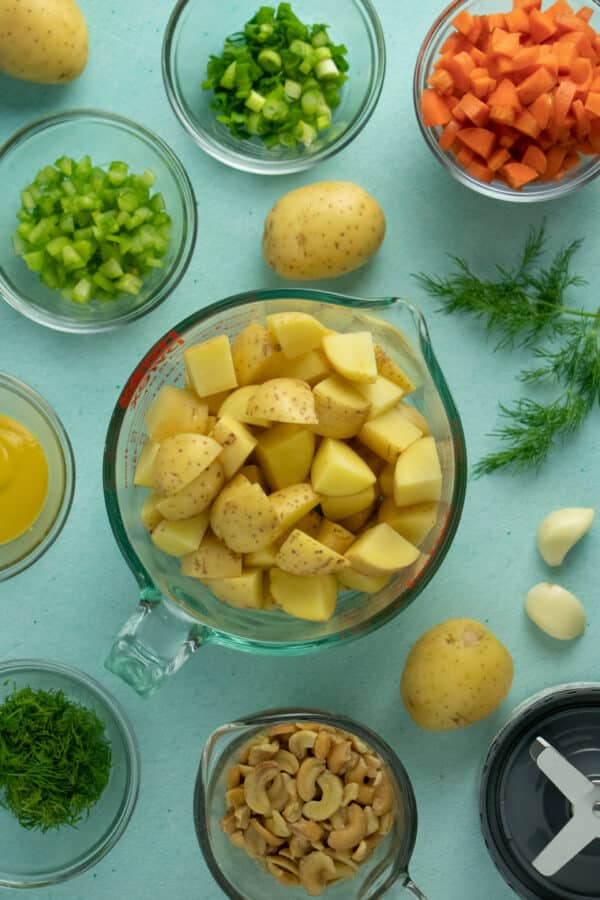 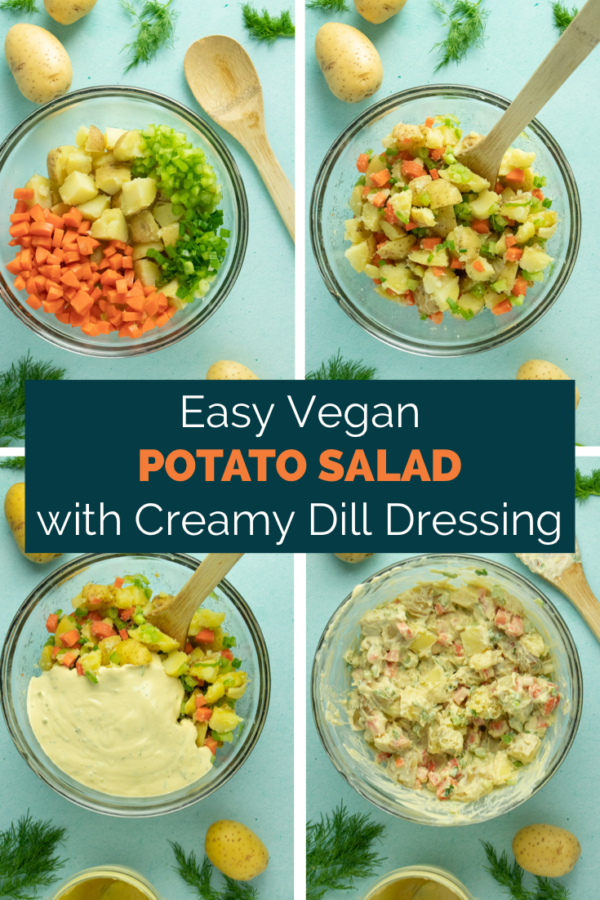 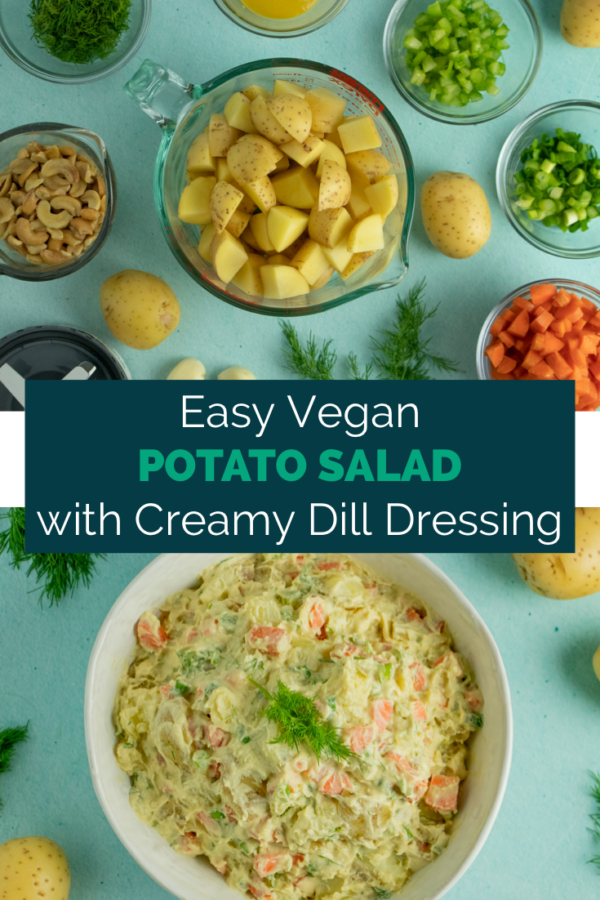 This creamy vegan potato salad doesn't use any vegan mayo! Instead, it gets its richness from quick and easy dilly cashew cream.

I originally made this vegan potato salad seven years ago for a good friend's birthday picnic potluck. It was the first real dish I made after having my kid, so I was extra excited for a chance to get cooking!

We had lots of dill left from a soup that my pops made when he visited, along with a few other veggies from the same visit. Sometimes a fridge cleanout makes the best recipe. This is one of those times.

You can make this potato salad recipe with any potatoes you like, as long as you end up with four cups of diced potatoes. What may change is the preparation.

If you use red, yellow, or white potatoes, you don't have to peel them. These potatoes have a thin skin that won't interfere with the creamy texture of this dish.

For russet or Idaho potatoes, you do need to peel. Russets have a thicker skin, and this potato salad is all about texture.

Like with potato choice, you have options here! The Instant Pot is my preferred method for cooking diced potatoes, but you can boil these on the stove instead, if you don't have a pressure cooker.

To prepare your potatoes, wash them well, then dice them into 1" pieces.

In the Instant Pot, combine the potatoes with ½ cup of water. Cook at high pressure for five minutes, then do a 10-minute natural release.

On the stovetop, combine the potatoes with enough water to cover in a medium saucepan. Bring them to a boil, then simmer, uncovered, for 10-15 minutes. You want them fork-tender.

Drain the cooked potatoes, and toss them with the chopped green onion, minced celery, and diced carrots.

I adapted the dressing recipe for this vegan potato salad from my garlic cashew cream sauce. There are just a couple of small changes.

Instead of lemon juice, this sauce gets its acidity from yellow mustard. Don't you love yellow mustard in a potato salad? Me, too!

Throw the soaked cashews (raw or roasted is fine), fresh water, garlic, and mustard into your blender. Then, puree until completely smooth.

After blending, you'll stir in fresh or dried dill.

I recommend that you start soaking the cashews before you begin preparing the potatoes and other veggies. That way, you will be ready to make the sauce while the potatoes are cooking. This sauce is best if it can sit for a few minutes, so the flavors have a chance to meld.

When the potatoes finish cooking, toss them together with the carrots, celery, and green onions. Fold in the dilly cashew cream, and serve!

What goes with potato salad?

Really, what doesn't go with this vegan potato salad? It's a great side dish for lunch, dinner, picnics, and potlucks.

Here are some ideas for what to pair with it:

In my estimation, anything that would pair well with a baked potato or mashed potatoes goes well with potato salad, too. 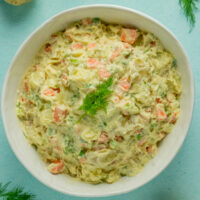 For the potato salad

More Appetizers and side dishes