Tangy, slightly spicy, and so, so easy. This Chipotle-Lime Veggie Burrito Bowl Recipe will knock your socks off! It's ready to eat in about half an hour.

This recipe uses the bowl variation for the Chipotle-Lime Burrito from my friend Sophia DeSantis's new vegan cookbook: Vegan Burger and Burritos. If bowls aren't your thing, you can wrap the fillings from this Chipotle-Lime Veggie Burrito Bowl recipe into a proper burrito.

The burrito bowl version of Sophia's recipe that I am featuring is actually supposed to be the kid-friendly variation, but I'm super into it, too! I chose to do the bowl instead of the burrito for two reasons:

About Vegan Burgers and Burritos

I love how Vegan Burger and Burritos has variations for making the recipes kid-friendly. Sophia knows about cooking for kids. She has three of them.

My guy is a pretty adventurous eater, for a four-year-old, but he still has his challenges. He hates spicy. With very few exceptions, he doesn't like his food to touch. And he will randomly decide to not like a food today that he loved yesterday.

Like with a sushi bowl, he can pick whatever random items he finds offensive out of his burrito bowl. And I can pretend not to see that happening. We avoid any avocado-location-related meltdowns, and everyone's happy!

Sophia has been working her face off on this book for such a long time, and I am so excited to finally have a copy in my hands! The book is gorgeous, and the recipes are so much fun!

This Chipotle-Lime Veggie Burrito Bowl is just the start of the deliciousness in her book. A bunch of other bloggers that I love have shared other delicious recipes. Here are a few to check out:

This one-bowl meal couldn't be easier to make, and you can adjust the spiciness to suit your family's tastes.

To prepare this recipe straight up, just saute the veggies, and pile them over chipotle-lime rice and beans. Top it all off with avocado, shredded cabbage, and Sophia's Smoky Tangy Cream or her World's Best Roasted Salsa.

If your family isn't into spicy, you can replace some or all of the hot peppers in the veggie mix with more bell pepper. You can also back off on the chipotle powder in the rice and beans.

And, of course, you can serve this as a proper burrito by simply rolling the contents up in a large tortilla. I'm including the directions for both below, so you can make your best meal. 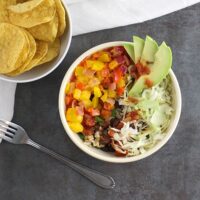 For the Rice and Beans

For the Burrito Bowl Option

For the Burrito Option

The calorie information is for the bowl version of this recipe with the cream sauce added.  Reprinted with permission from Vegan Burgers and Burritos by Sophia DeSantis, Page Street Publishing Co. 2017.