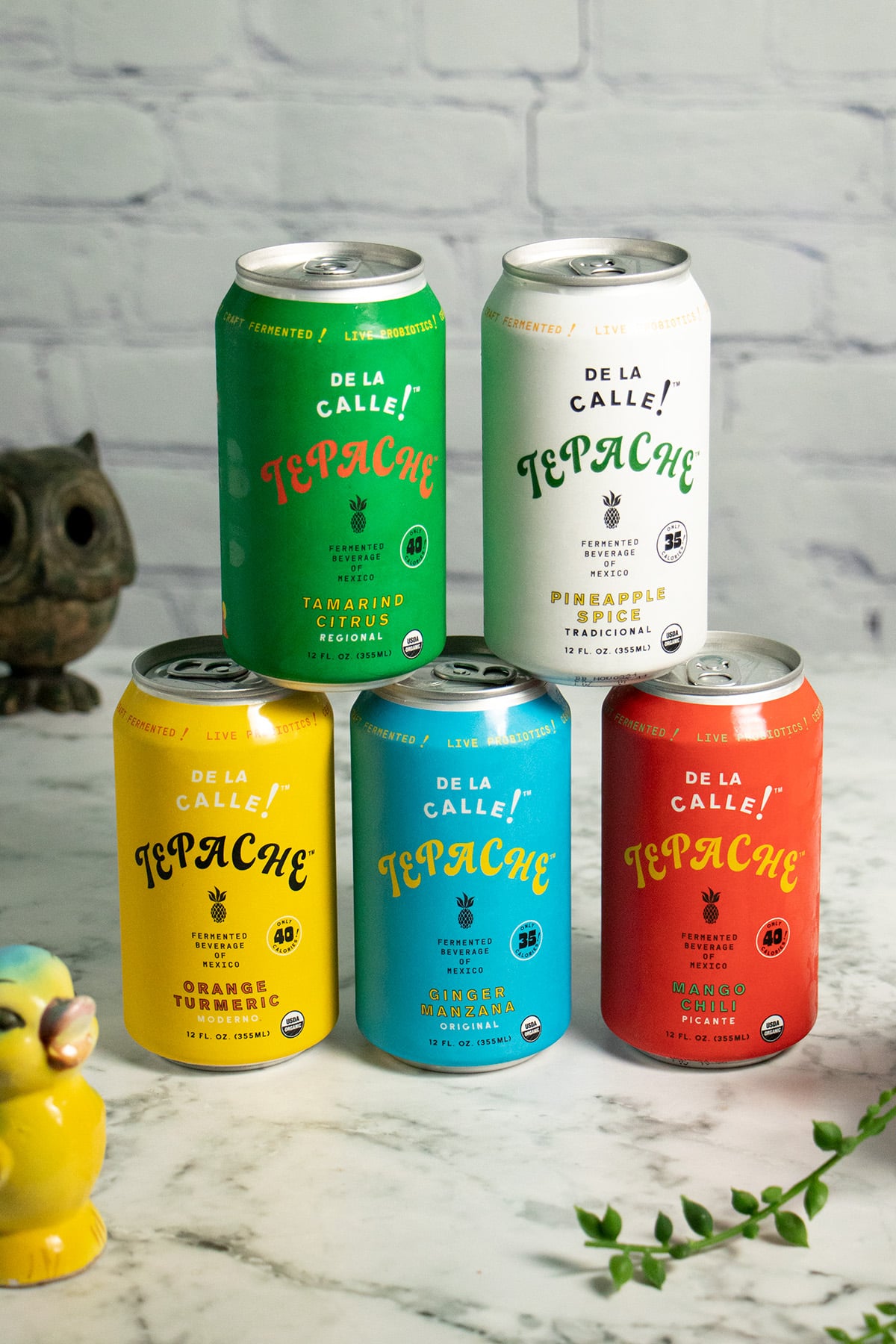 Tepache is new to me, and I was excited to learn more about this non-alcoholic, fermented drink.

As regular readers probably know, I quit drinking in spring of 2021. Since then, I've really enjoyed finding other special drinks to fill that void. Fancy sodas and kombucha have been some of my go-tos, and I'm excited to add tepache to that list!

According to the De La Calle website, tepache is an Aztec drink whose history goes back thousands of years. It's traditionally made with pineapple, pineapple rind, sugar, cinnamon, and other spices. The mix of fruits can also vary in modern tepache recipes.

Like kombucha, it's a fermented drink with a negligible amount of alcohol in it. Also like booch, that fermentation process packs it with probiotics and gives it natural carbonation.

You can drink it straight up or use it as a mixer with booze or with beer.

For the podcast, we sipped these straight from the cans.

Where to buy it

You can get De la Calle Tepache at some stores, bars, and restaurants. I'd recommend using their site's store finder to see if anywhere near you carries it. Here in Atlanta, no luck.

If it's not available locally, your best bet is to order directly from their website. That's what we did. The cans arrived quickly and were packed to keep them cold, protecting those good, good probiotics!

I'm going to say up front that we are just a couple of white people in Atlanta who had never had tepache before ordering this sampler pack. This review is based on our first experience with tepache. We all have to start somewhere!

Because of the pineapple base, all of these had a strong pineapple flavor with a hint of cinnamon. If you like pineapple, warming spices, and bubbles, I think this tepache might be your dream come true!

Dave and I are both fans of these things, so in we dove.

I'm going to list these in order from my least to most favorite. Please keep in mind, though, that I liked all of these. The one I liked the least, I still liked and will drink again.

Think of this as their "plain" flavor, though this drink is anything but. It was sweet from the pineapple with a nice fizz. And, for me, the cinnamon flavor was strongest in this one.

There was also black pepper in the mix, which gave it a flowery taste that made me think it had cloves in it. The whole thing almost had a mild pumpkin spice vibe, despite not containing all of the seasonings in that spice blend.

Pumpkin spice and pineapple is an unusual combination, but it really worked for me. It gave this tepache a festive, holiday feel. It was shippable, like wine, to me, and I think it would work well as a booze stand-in.

This bubbly beverage had a mild orange flavor. It was the smoothest of the bunch.

There was rosemary in the mix here, which comes through subtly at the end of your sip.

My main complaint about this one is that I wish the tamarind flavor had been stronger. I was very excited to drink this, because I love tamarind, but then the taste wasn't really there.

That said, it was a nice drink. Just not super notable for either of us.

To me, the Orange Turmeric flavor gave light Orangina vibes! I didn't really taste the turmeric, but it did give it a vibrant color.

This one was Dave's least favorite. He said, "It tastes like a lobby." I think he might have been referring to it having a bit of a flowery flavor, which I actually really enjoyed.

I do agree with Dave that, while this one smelled nice and tart, the tartness wasn't there when you sipped it. We both chalked this up to the turmeric, though I'm not sure what the science there would be.

Scientists, get at us.

While the flavor here wasn't what I was expecting, the Orangina-ness of it really did it for me. This one was a yes from me!

The Ginger Manzana (apple) was a top pick for both of us! The apple juice gave this can some extra sweetness, and it played really well with the cinnamon and ginger.

This tepache was very refreshing! The sweetness from the apple caused the spice from the cinnamon and black pepper to hit the back of your throat rather than the front of your mouth. It was nice and warming.

The ginger apple tepache was just a really pleasant drinking experience, which is why it was a top pick for both me and Dave.

This flavor was the reason that Dave bought the De la Calla Tepache sampler pack. After how much he loved the Mango Chili Nerds, he was on the hunt for a mango chili soda, and this came up in his searches.

When you open the can, the mango smell is already there, pulling you in. I was so eager for that first sip.

Y'all, what a lovely drink this was! Like the apple, the mango gave this more sweetness, which paired really well with the warming cinnamon and chili. This can also had lime juice and lime extract, which gave it a nice tartness that offset the sweet mango and pineapple flavors.

The texture was thicker than the other tepache varieties that we tried, because there is actual mango puree in the can. Dave described the flavor and texture as "treaties," as in more of a treat.

Like the tamarind variety, though, we felt like it didn't totally deliver on the name. We could have used a bit more chili kick in our glasses, though we both still loved this one

Have you tried De la Calle Tepache or other tepaches? I'm excited to explore this new-to-me genre of drink! I'd love to hear your experiences, favorites, and how you'd use these as mixers for both alcoholic and nonalcoholic drinks!

Thank you so much for listening (or reading!). We record these episodes for you, and we'd love to hear from you.

Got a favorite vegan treat that you think we should cover on the podcast? Send your suggestions to [email protected]!

You can find Talkin' Tofu on: