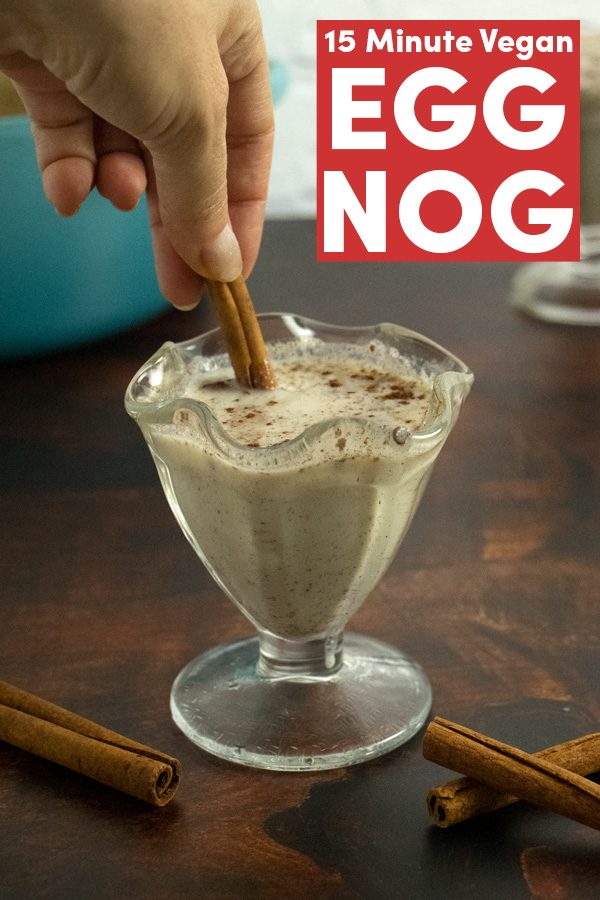 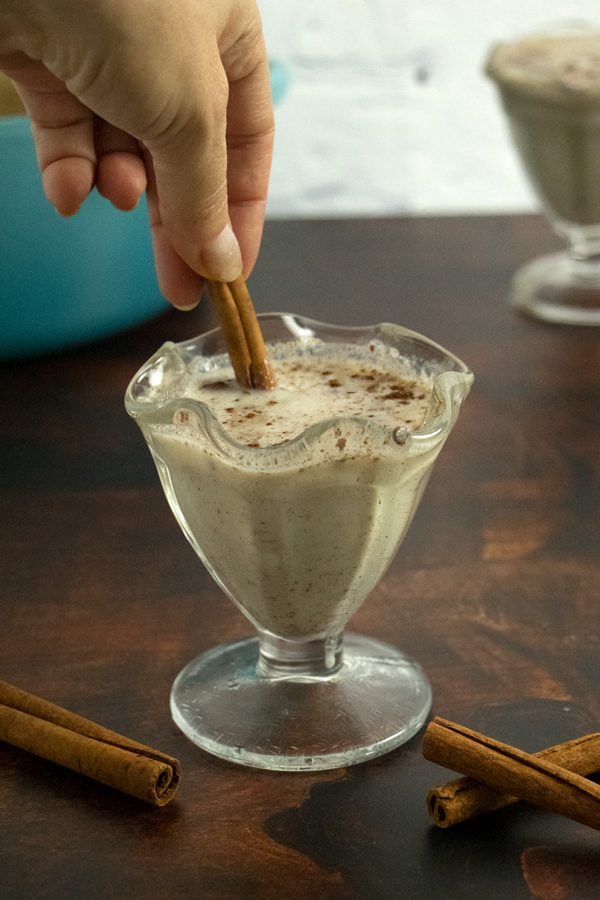 Normally, I just buy a carton of premade vegan and call it a day, but I decided that it would be fun to come up with my own vegan eggnog recipe. Sometimes, I like cooking from scratch, just for kicks.

It's so easy! This recipe took 15 minutes total. And it stores well, so you can make it in advance and keep it in the fridge for up to three days.

I know, technically I guess you can't call eggless nog "eggnog," but this is me doing that very thing. And I'm not sorry. This vegan eggnog recipe is rich, creamy, and satisfying. Who needs eggs?

The first thing I did in sorting out how to make my own eggless eggnog was look up what makes nog...nog. It's been a long time since I've had actual eggnog, and I wanted to be as legit as possible here.

Basically, eggnog is a rich, sweet, creamy drink with nutmeg and vanilla in it. Sometimes folks top it with cinnamon.

Yes, some of the creaminess from traditional eggnog comes from eggs. In my recipe, I get that same thick, richness from full-fat canned coconut milk. And it. is. DELICIOUS!

How to Make Vegan Eggnog

You can serve your vegan eggnog with or without booze. My recipe below uses rum, but you can also use bourbon, if you prefer. Or go with no booze at all. I think its versatility is one of the reasons that nog is such a crowd pleaser.

Regardless, while you decide whether or not to spike your mug, let's make some nog!

Grab yourself a saucepan, and combine a mix of canned, full-fat coconut milk and your favorite vegan milk. Before you add the coconut milk to the pan, though, give the can a good shake. Canned coconut milk tends to separate, especially when it's cold in your kitchen. Shaking before you add means fewer lumps to whisk out.

Now, it's time to spice this milky mix! Add a bit of maple syrup and organic sugar, plenty of ground nutmeg, a touch of cinnamon, and a healthy dose of vanilla extract.

Then, whisk away. The ground spices are going to want to sit on top of the milks, and whisking frequently as you heat is the key to combining them. You don't have to stand there and whisk for the full 10 minutes, but definitely do lots of whisking.

It's ok if some ground spices are still sitting on top of the mixture when you're done. Just incorporate them as best you can and get out any lumps.

How to Serve and Store Your 'Nog

If you're using booze, add a shot of rum or bourbon to your mug, then top off with the nog and garnish with a cinnamon stick.

For non-boozy vegan eggnog, just skip the shot and fill the mug to the brim with sweet, creamy eggnog and toss a cinnamon stick garnish in there.

This recipe also stores like a dream in the refrigerator for up to three days. You can use the leftovers as a decadent coffee creamer or warm it back up in mugs to serve straight up.

To reheat, pour the mixture back into a small pan and heat on medium until it's warmed through. If you have a microwave, you can also pour the cold eggnog into a mug and microwave for a minute or two to heat it through.