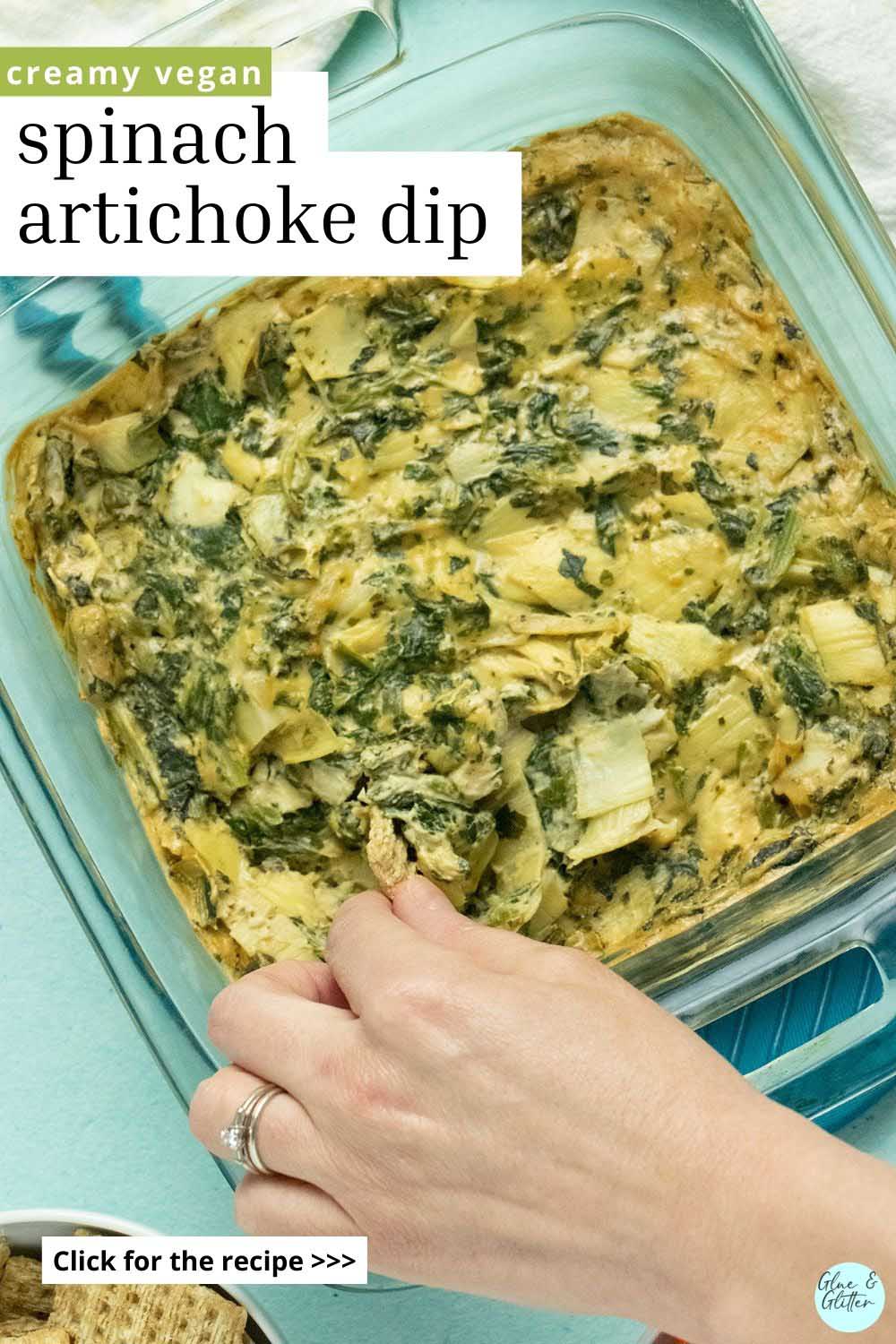 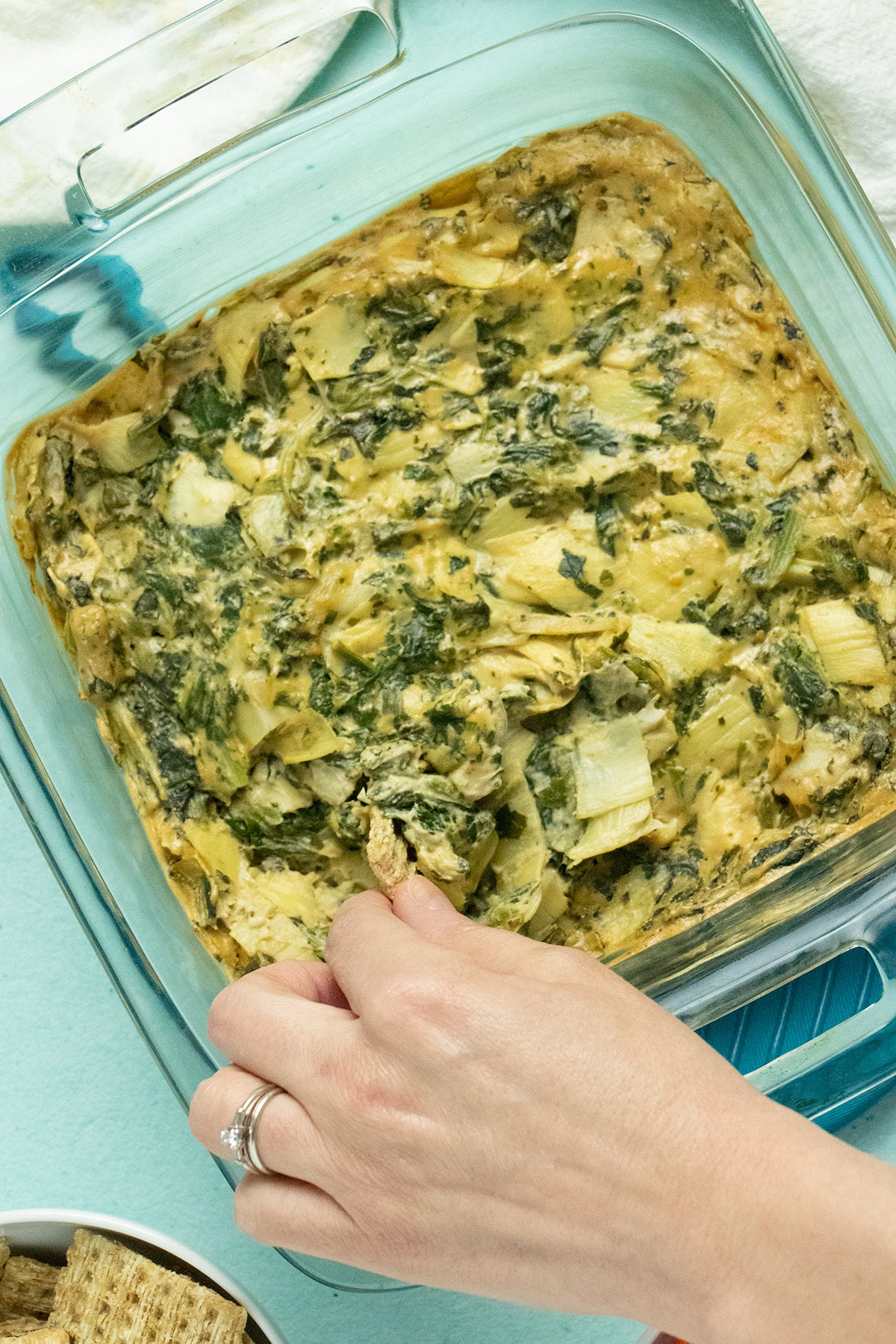 Warm, creamy vegan spinach artichoke dip uses no mayo, cheese, cream cheese, or sour cream. But even though it's dairy free, it's just as decadent. No one will be able to tell that it's vegan!

This spinach-artichoke dip is a vegan version of a family favorite from my childhood. Let me tell you a story.

When I was growing up, my mom had a friend who we can just call Betty. Whenever our family would get together with Betty's, she made this super delicious artichoke dip.

It was sort of her thing, and my sister and I loved it. Mom asked Betty a few times if she'd share her recipe, but she told us it was an old family secret.

Then one evening at supper I was looking on the side of the Kraft Parmesan cheese container, and there it was: a baked artichoke dip recipe! We passed the container around the table, and we were pretty sure that we'd discovered Betty's "family secret."

We made a batch and it tasted exactly like hers! Of course, next time we all got together, mom brought a pan with her. Busted!

Now, I make my own vegan spinach artichoke dip. It's so similar to the one we ate as kids -- no one will guess that it's vegan!

I texted my mom to get the non-vegan recipe -- it was heavy on the mayo and, of course, the shakey Parmesan cheese. Then, I veganized it. I'm thrilled with how it came out!

Instead of mayo, I created a flavorful garlic cashew cream sauce to give this dip its a creaminess. The cashew cream comes together quickly in the blender.

To replace the shakey Parm, I just substituted nutritional yeast.

The original dip didn't have spinach, but I think the greens make it a lot prettier and maybe even more delicious than the dip I remember from childhood. This recipe uses thawed frozen spinach, because it's easy and has the perfect texture.

Make sure that you drain that spinach well! Frozen spinach contains a lot of water. I like to actually "wring" it out in a colander. You don't want a watery dip!

Now, it's time to assemble! Combine the cashew cream, drained spinach, and drained, chopped artichoke hearts, and nutritional yeast in a baking pan. Fold the ingredients together until they're well combined, then taste and season with salt and pepper.

Bake until the edges are browned and bubbly, and you are ready to serve!

If you don't like artichoke (or don't like spinach), you can customize this dip to suit your tastes. If you eliminate one of the veggies, just double the amount of the other, and you're in business.

This recipe is very forgiving, so don't be shy about mixing things up, if that's your thing!

How to serve and store it

Serve this up with your favorite chips, crackers, or veggies for dipping. I love it with bagel chips, whole wheat crackers, or pita chips. You want a pretty sturdy chip, because the baked dip is rich and thick.

You can also use this as a spread for sandwiches and wraps. This was my sister's and my favorite way to use the leftovers the next day, when mom used to make spinach artichoke dip for parties.

I also use this dip as a sauce for my spinach artichoke pasta. It's a super simple one-pot meal that's quick and easy to make!

The baked dip will keep in the refrigerator for up to three days in an airtight container. If your 8x8" pan has a snap-on lid, you can just store it right in the pan. Otherwise, transfer to a lidded container.

I do not recommend freezing this dip. Freezing can change the texture of your cashew cream.

You don't need raw cashews to make this dip! I used to always recommend raw cashews for the creamiest cashew cream, but in a pinch, I made a discovery. Soaking in hot water softens up roasted cashews just fine. So don't worry about tracking down expensive raw cashews. Whatever you have handy -- salted or not -- will work. This recipe doubles easily, and you can fit the doubled recipe into the same 8x8" pan that you use for a single batch. Since a double batch will fill the pan, I recommend doing the mixing in a separate, large bowl. It's going to be tough to mix that much dip right in the pan. You can also make this with just spinach or just artichokes. Simply double the amount of one and leave out the other. The cooked dip will keep for up to 3 days in an airtight container.

The resulting dip is just as rich and creamy with no dairy needed!

Is spinach artichoke dip supposed to be hot or cold?

You can serve it either way! I love it warm from the oven, but I have definitely been known to dig into leftover spinach artichoke dip cold with crackers.

How do you reheat it?

If you do want to reheat cold spinach artichoke dip, you have a couple of options. You can spread it into a pan and bake it until it's warmed through. Or, you can scoop the portion you want onto a plate and microwave it for a minute or two to heat it up.

Serve this up with corn chips, carrots, celery, or hearty crackers for dipping. I especially love this dip with Triscuits, Wheat Thins, pita chips, or bagel chips.

Can you make this ahead?

You can! Make the dip up to a day ahead, then pop it into the oven to bake just before serving.

More Vegan appetizers and side dishes