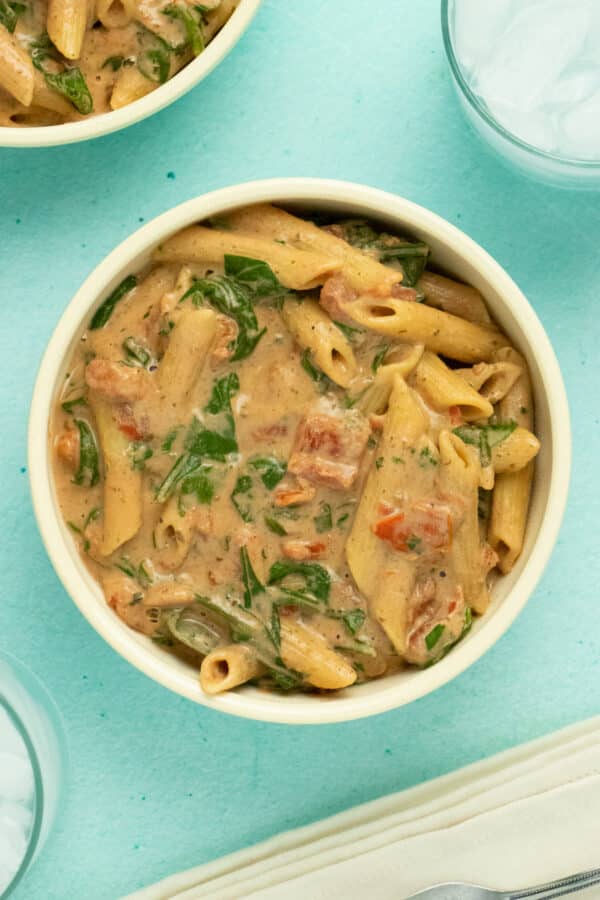 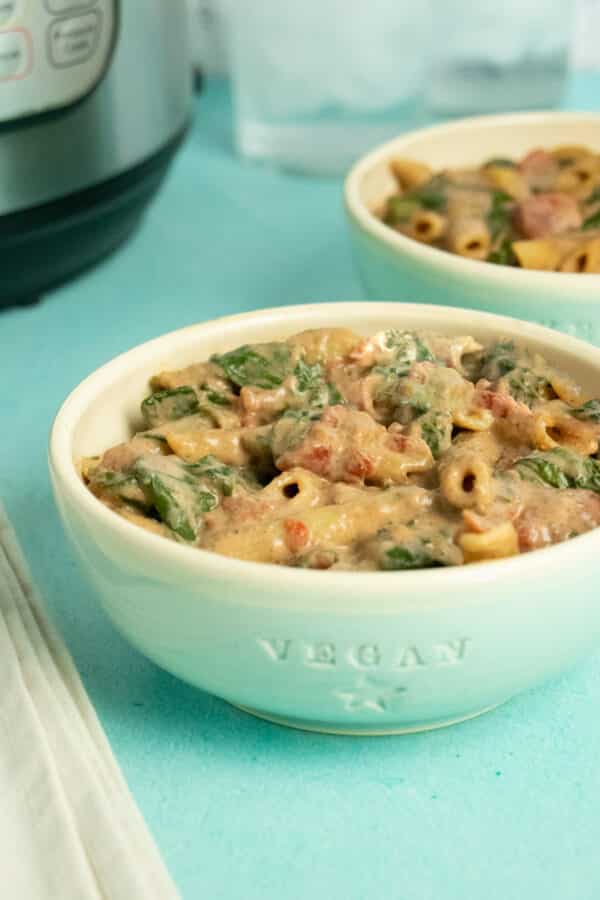 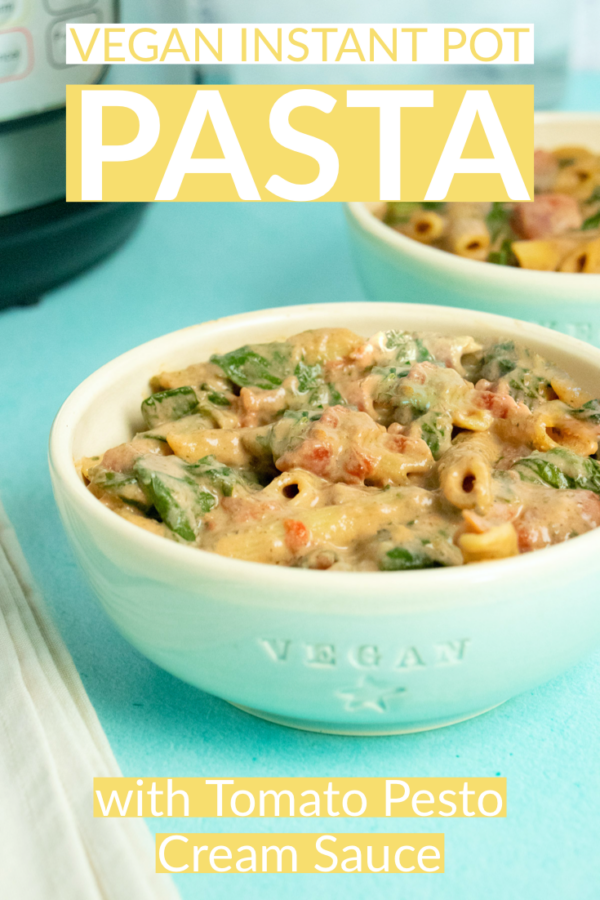 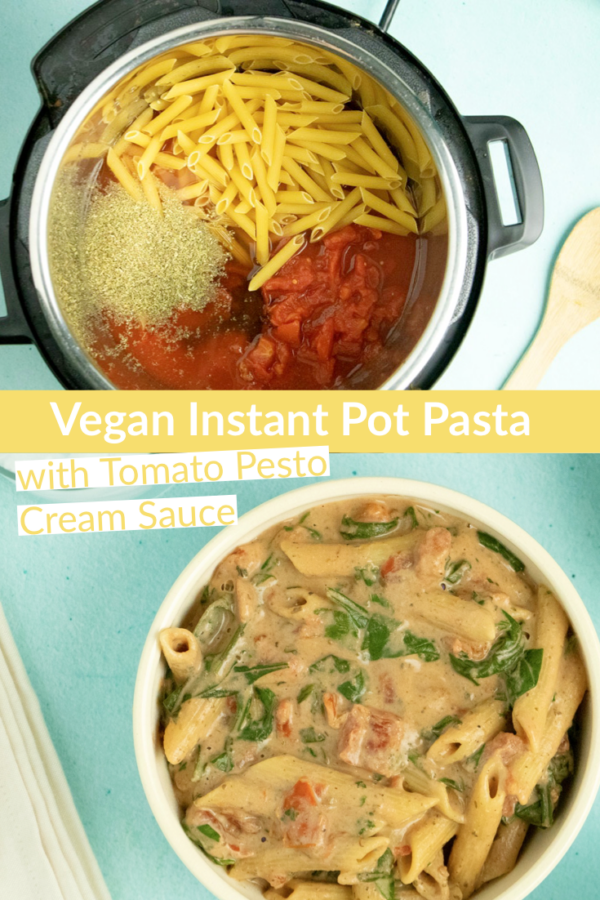 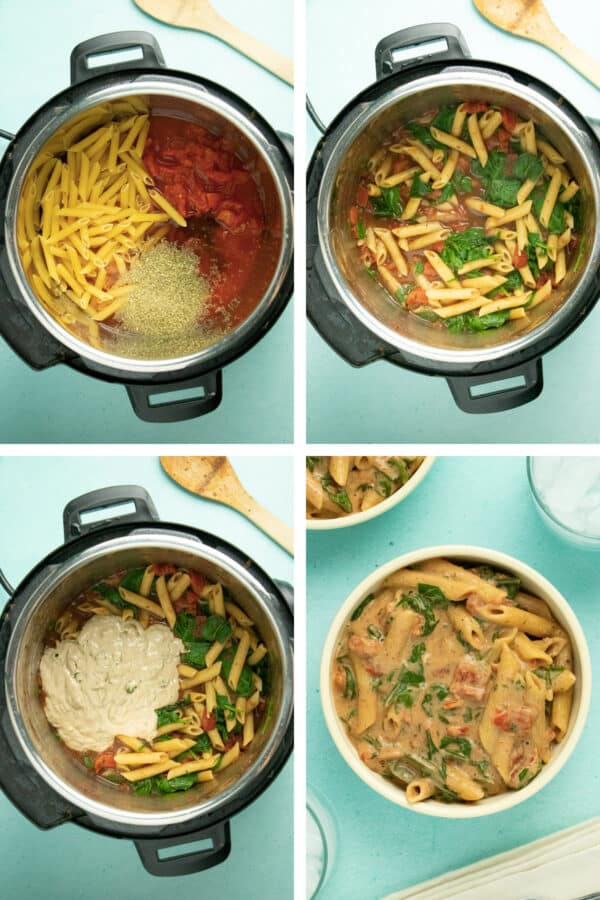 Tender pieces of penne in tomato pesto cream sauce cooks up like a dream in your Instant Pot. This vegan Instant Pot Pasta recipe is bursting with flavor!

Y'all, I'm on a real one-pot pasta kick! I loved the ease of making One-Pot Penne alla Vodka so much that I decided to give this Instant Pot pasta thing a go.

This recipe was SO easy to make, and I love that it's something kid-friendly that I can throw together using mostly ingredients from the pantry.

I think you're going to love it, too.

How do you cook pasta in the Instant Pot?

There are two keys to successfully making pasta in the Instant Pot or any electric pressure cooker:

When it comes to the liquid, the general rule is 3 cups of water per 8 ounces of pasta. Your canned tomatoes do NOT count as part of the liquid. The 2 ½ cups of penne in this recipe is about 4 ounces, so you need 1 ½ cups of water.

Unlike making one-pot pasta on the stove, you don't stir Instant Pot pasta while it's cooking. But because the liquid inside the pot is at such a fierce, rolling boil, it stirs itself.

The cool thing about making pasta in the pressure cooker is that you can cook the sauce and the pasta at the same time, in the same pot!

To make the sauce, you just throw all of the ingredients into the pot with the pasta and water, then stir to combine.

This tomato sauce has two parts. First, you cook a pretty basic tomato sauce in the pressure cooker with the pasta. It's truly just canned tomatoes, Italian seasoning, and balsamic vinegar.

Cook at high pressure for 5 minutes, then do a quick release.

You make part two of your creamy tomato sauce in your blender while the pasta is cooking. The Pesto Cashew Cream brings rich garlic and basil to the mix when you stir it in at the end of cooking.

This recipe is a spin on my Garlic Cashew Cream Sauce, and it brings both the creaminess and a lot of the flavor to your pot of pasta.

Start by soaking your cashews in hot water for 10-15 minutes. You do not need raw cashews for this recipe! Roasted is fine. Just soak roasted for the full 15 minutes, and they'll soften right up.

I like to start the cashews soaking before I start the pasta. That way, you have plenty of time to make the cashew cream while the pasta cooks.

Once the cashews finish soaking, drain them and discard that soaking water. You can use it to water a plant, if you want, but please do not use it in the sauce!

Transfer the drained cashews to your blender. Then, add a few cloves of fresh garlic, and some sweet balsamic vinegar to the blender. Throw in a splash of water, and blend this mix until it's completely smooth.

Stir in plenty of fresh basil, and your pesto cream is ready!

Putting it all together

When the Instant Pot finishes cooking, do a quick release.

Helpful Tip: Instant Pot pasta spurts a LOT when you toggle that release valve! Throw a kitchen towel over the top of the pot before you release the pressure to catch the spray, and save yourself from a big mess!

Now, open your pot, and add plenty of baby spinach or your favorite quick-wilting green. Chances are, the pasta and sauce will be hot enough to wilt those greens. If they aren't wilting, though, you can hit the Saute button to warm them up more.

After the spinach is cooked down, stir in the Pesto Cashew Cream, and it's time to EAT!

How to store and reheat it

Store any leftover pasta in an airtight container in the refrigerator. It will keep for around 3 days.

To reheat, you can either warm it in the microwave or transfer to a pan on the stove. On the stovetop, cook on medium heat, stirring, until heated through. If the sauce has thickened up too much, you can add water, a tablespoon or two at a time, to thin it out. 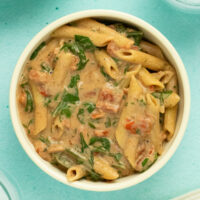 For the Pesto Cashew Cream