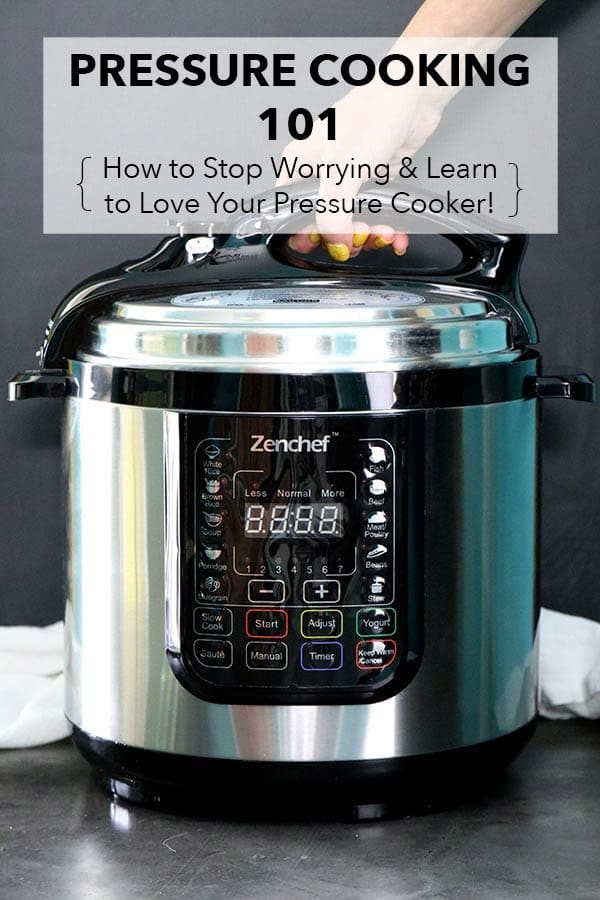 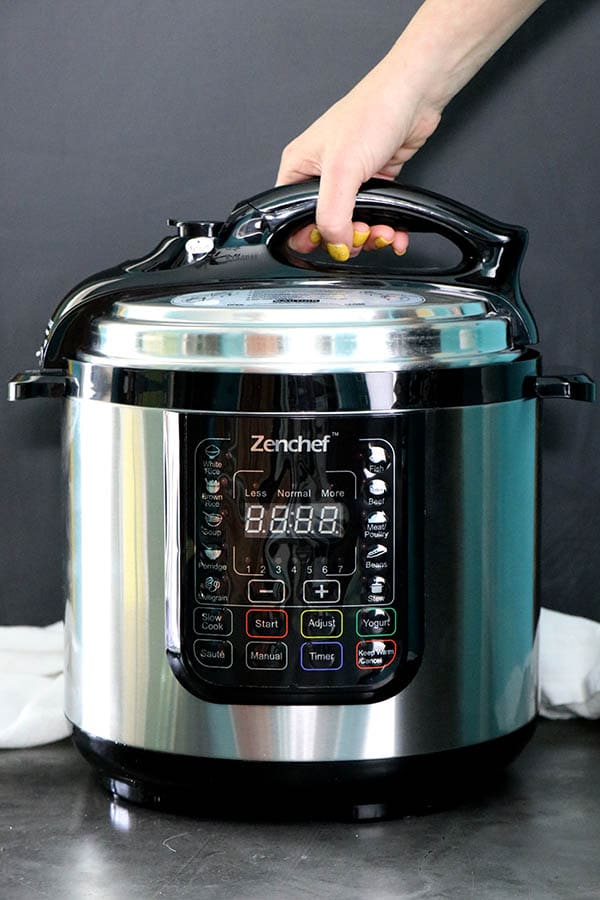 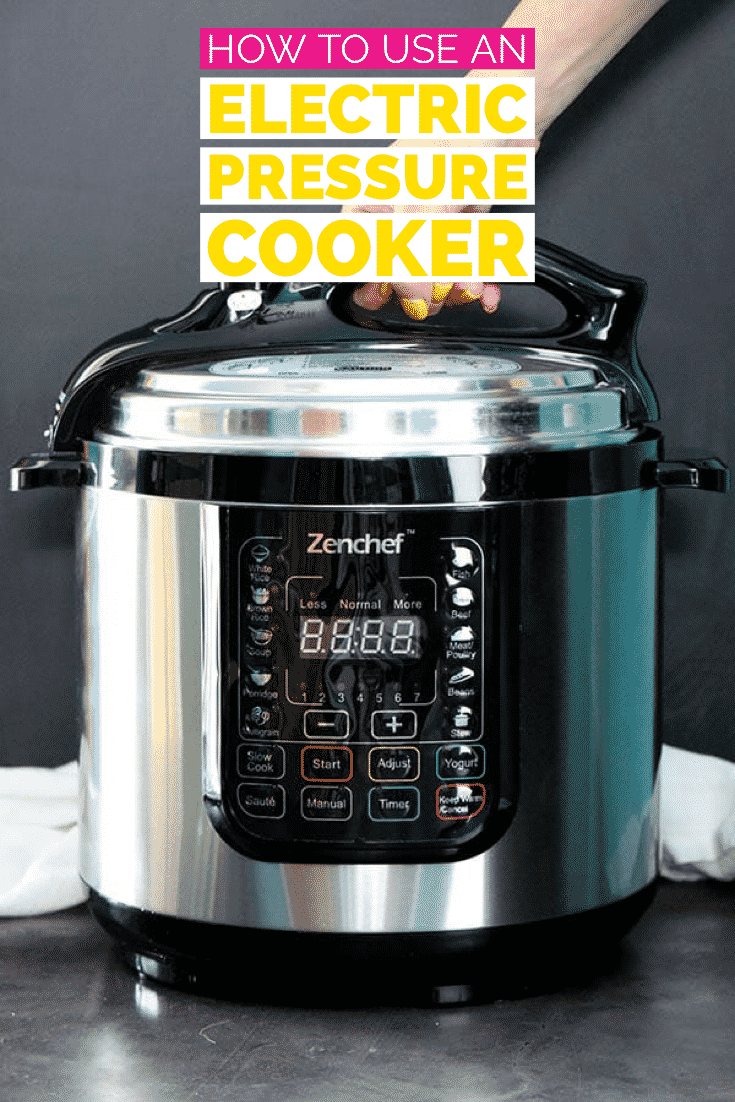 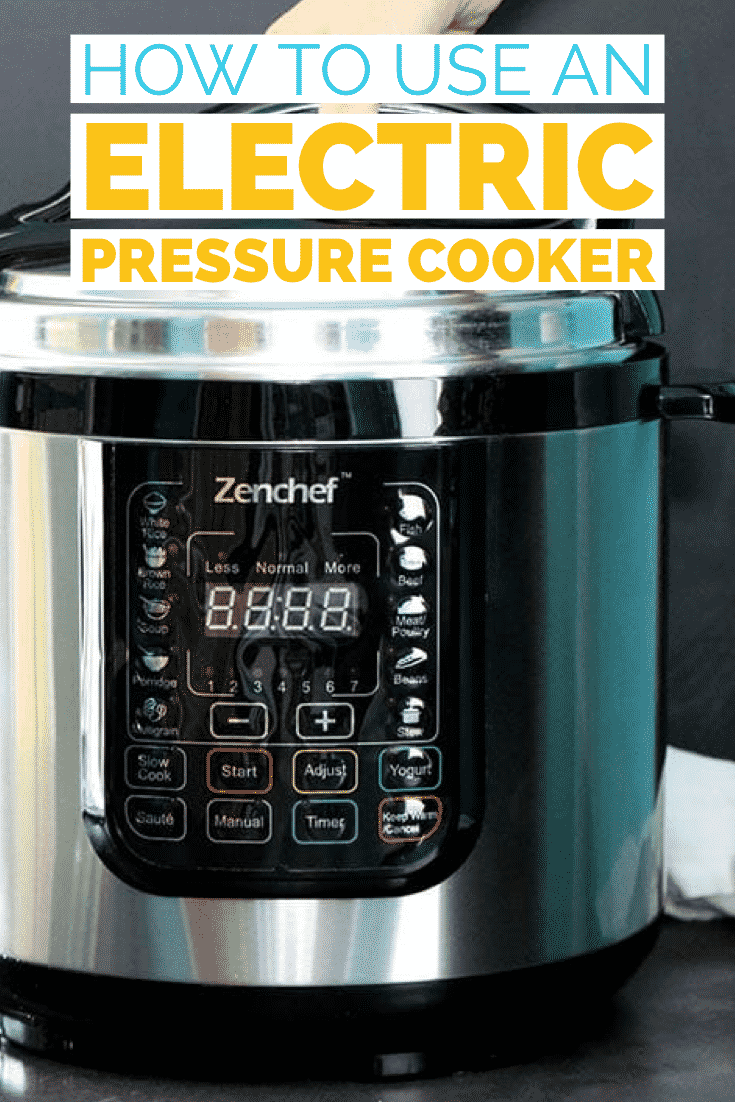 This recipe is sponsored by ZenChef. All opinions are 100% my own.

Pressure cookers can feel a little bit overwhelming when you first start using them. Learn how to use an electric pressure cooker like a pro. It's easier than you think!

Before we get to the basics, though, let's talk about the number one worry I hear from people who ask me how to use an electric pressure cooker: an exploding pot.

We have all heard stories of older pressure cookers exploding. The first time I used my own pressure cooker, I literally pressed the start button, and then RAN out of the room to hide.

I want to put your mind at ease. I've been pressure cooking for almost five years now, and I've never had a single explosion. The one time I even heard about a pot exploding, it turns out that it was because the user tried to wrench the pot open without waiting for the lid to unlock automatically.

What an electric pressure cooker does

Let's talk about what your electric pressure cooker can and can't do.

A pressure cooker that does other stuff like this is often called a "multi-pot".

Most multi-pots also have preset buttons for things like beans and soups, which I don't recommend using. These presets can feel like a shortcut, but think about beans, for example.

The cooking time for lentils is going to be very different than for something larger, like pinto beans. If you press "beans", you are using an average cooking time. Not ideal.

Key parts of your pressure cooker

The thing I found most overwhelming when I first got my pressure cooker was actually understanding the lingo that recipes used. What the heck were these valves and releases everyone kept talking about?

Honestly, there are only a few parts you need to know about for day-to-day use. Let's discuss!

On the top of your pot, there are two pressure valves: the Pressure Indicator Valve and the Pressure Release Valve.

The Pressure Indicator Valve is a small, usually silver, cylinder that you can use to see whether your pot is still at pressure. From above, you'll see a little circle.

If the cylinder is up high, your pot is at pressure. When it drops down, the pressure is low enough that you can open the lid.

The Pressure Release Valve is what you use to manually release the pressure in your pot.

If the valve is pointing toward the word "Airtight" or "Sealing", then the pot will retain most of the steam. To release the pressure, toggle it to "Exhaust" or "Venting".

If a recipe says something like, "Cook at high pressure for X minutes, then quick release," that means you cook with the Pressure Release Valve in the "Airtight" position, then toggle it to "Exhaust" as soon as the cooking time is up. That will release the pressure more quickly. Quick release!

Sometimes, a recipe will say to do a natural release for a certain amount of time, usually 10 minutes. In that case, wait for your pot to beep to indicate that the cooking cycle is done. Then, set a 10 minute timer. When that timer beeps, toggle the Pressure Release Valve to "Exhaust" to release the remaining pressure.

For that first 10 minutes, your pot's pressure was coming down, just more slowly/naturally. Natural release!

Any pressure cooking recipe will say something along the lines of "lock the lid." This is so easy to do.

To lock the lid, just fit the lid on top of the pot, so it sits flat. Then, turn it until it naturally stops. Viola! Your lid is locked and loaded!

The Condensation Cup is the little, clear cup hanging on the back of your electric pressure cooker.

Excess moisture from the cooking process collects here. Make sure you empty this occasionally, because that water can get GROSS if you let it sit.

The cup clicks right off. Just empty it out, wash in a little warm, soapy water, and pop it back into place.

The sealing ring (& how to clean your pressure cooker)

Inside of the lid, there is a large, rubbery ring that pops out easily for cleaning. This is the Sealing Ring, and it is dishwasher safe.

You don't have to clean the Sealing Ring every time you use your pot, but if your pot is a little smelly, cleaning it can help.

When you pop it back in, you know it's in place properly if you can easily rotate it back and forth. It's important to get it seated correctly, because if it's not in properly, your food won't cook properly.

If your sealing ring gets damaged, you can buy a replacement pretty cheaply. Make sure that you choose one that lists your pot, so you'll be sure it fits properly.

If you want more details on how to clean your pressure cooker, the video below is great. He is showing the Instant Pot, but this tutorial will work with most electric pressure cookers.

Just make sure you look at your user manual before you start taking things apart, just to be on the safe side.

Get to know your pressure cooker's controls

Let's break down the pressure cooker's main functions, so you can see what each one does.

When you lock the lid and close the sealing vent on your pressure cooker, you are creating an airtight situation inside of your pot. As your food cooks, pressure builds up inside of the pot, which is how it cooks food so quickly.

People often ask me if there's a difference between a pressure cooker and an air fryer. The short answer is: yes. I hope that the longer answer will help you suss out what you can and can't cook in a pressure cooker.

What these appliances have in common is that they both cook more food quickly than conventional methods. An air fryer uses hot, circulating air, so think of it as a replacement for "dry" cooking, like pan frying or baking.

A pressure cooker, on the other hand, uses the pressure from steam. Use it to cook "wet" foods, like soups, stews, beans, steamed vegetables, etc.

If your pot has a "Saute" button, like my ZenChef Multifunctional Electric Pressure Cooker does, please jump for joy! You can use this button to saute food right in the pot.

For example, maybe you are making a chili recipe that calls for sauteing the onions and peppers before you add the liquid.

Instead of frying your veggies on the stove, then transferring to the pot, you can just hit that saute button and do it right in the same pot you are using for the rest of the dish.

Does your multi-pot have a "Slow Cook" button? If so, it can replace your current slow cooker. Hello, space-saving!

Y'all, when I got my first multi-pot, I was SURE that I'd never, ever in a million years use it to make yogurt. Then, one day, I did.

Now, my kid and I both prefer my homemade soy yogurt over store-bought brands. The ZenChef Multifunctional Electric Pressure Cooker does have a "Yogurt" button.

Most electric pressure cookers default to "Keep Warm," which is great for something like a stew that's virtually impossible to overcook. The function is on when the light is on over the button.

If you're making something, like sushi rice, though, you may want to press the button to turn off that function. Just in case you get pulled away, you don't want drier food to burn and stick!

I'm going to keep this part short and sweet. There are two pressure cooker cookbooks that I turn to again and again.

Most people associate pressure cookers with making beans, and they do make beans like a champ. But you can use your pot for so much more!

Use your electric pressure cooker to make:

For me, a great beginner recipe is one that is easy to follow and gets you acquainted with your pot's main functions (saute, pressure, & yogurt). These are some recipes that beginners will love:

Looking for some tried-and-true, family-friendly recipes to make in your electric pressure cooker? I am so glad that you asked! I actually have a whole separate page dedicated to my family's 10 favorite Vegan Instant Pot Recipes.

Don't worry -- an Instant Pot is just one brand of electric pressure cooker. You can use any brand of multipot to make Instant Pot recipes