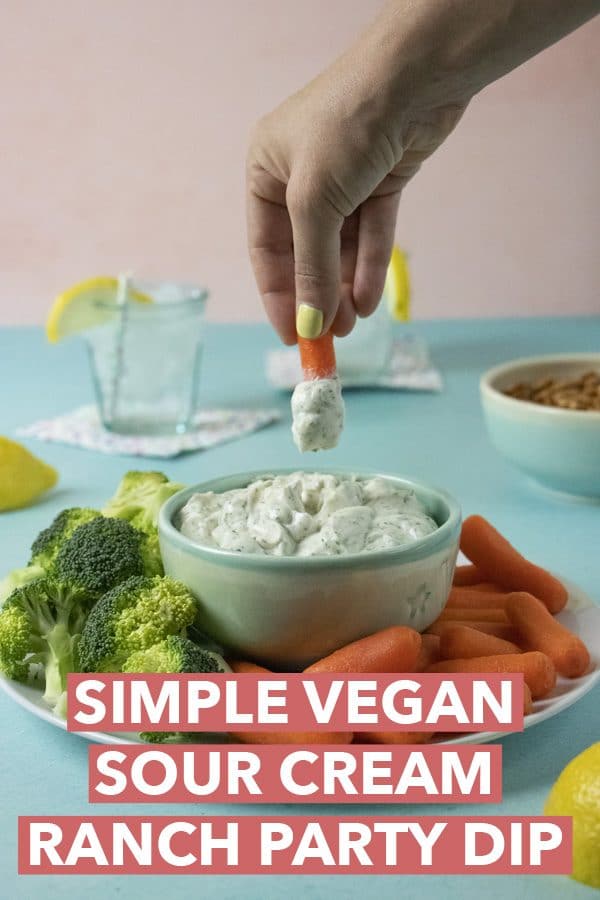 Tangy, dilly vegan sour cream dip is quick and easy to make. It comes together in minutes, even if you choose to make the sour cream from scratch!

If you want to make your sour cream from scratch, I recommend Gluten Free Pantry's Best Damn Vegan Sour Cream. I have to say: it's aptly named!

You can use her recipe, your favorite homemade sour cream recipe, or packaged vegan sour cream. You do you!

If you're making from-scratch sour cream, you can add the spices in this recipe to the blender when you're making the sour cream itself. It can all come together at once.

For store-bought, just mix the sour cream in your serving bowl with the spices, and you're good to go.

Either way, this simple dip takes about 10 minutes of active time to make. You can serve it right away, but I definitely recommend chilling it.

The chilling time gives the flavors a chance to meld, and you'll have a much more flavorful result if you wait. It also allows the sour cream to thicken up more for the most decadent dipping experience.

How to Store and Use It

You can make this recipe a day or two before your party. It keeps for up to a week in the fridge. If you are making this ahead or if you have leftovers (you won't!), just store in an airtight container in the refrigerator.

This sour cream dip also works in other applications besides as a dip. It's great dolloped onto baked potatoes or a bowl of soup. I sometimes like to add a spoonful of this dip to a bowl of Vegan Chicken Stew to give it a creamy edge. 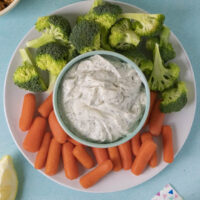 Calories: 100kcal
Tried this recipe? Share your photo!Mention @GlueAndGlitter on Instagram or Twitter!
« Ginger Apple Slaw with Avocado and Cashews
Creamy One-Pot Beer and Cheese Soup (and it's vegan!) »