Home » Eating Vegan » What is gelatin made of, and why don't vegans eat it? 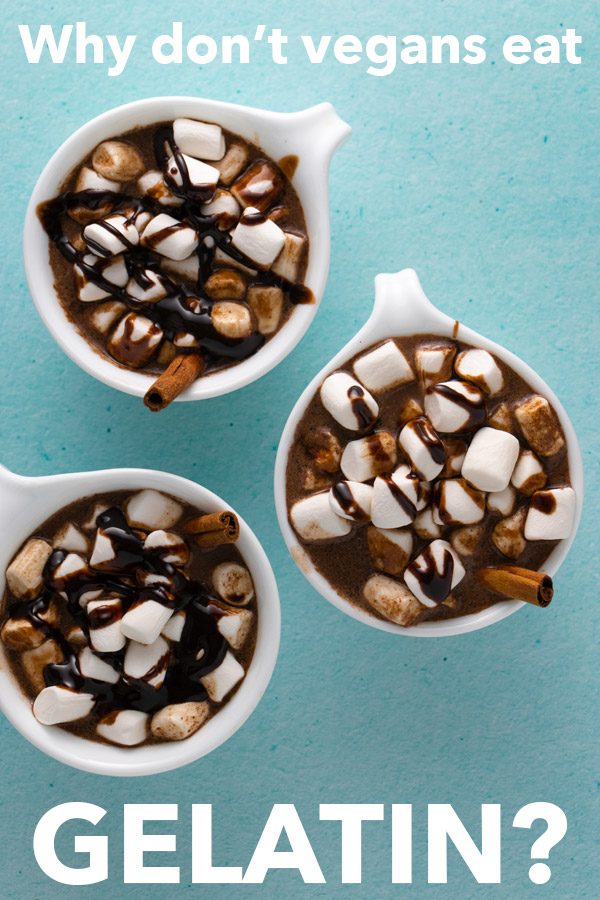 Gelatin isn’t vegan (or vegetarian!), so you may be wondering what gelatin is made from. Why don't vegans products like Jello or marshmallows?

Let’s talk about what gelatin is and some veg-friendly alternatives to common gelatin products.

Related: Why do vegans eat "fake" meat and cheese? Isn't that unhealthy?

Gelatin is an ingredient used as a thickener and as the base for certain sweet treats, like gummy candy and marshmallows.

It’s why Jello is firm and jiggly, and it’s used in cakes, pies and even some low-fat dairy products to make creamy foods thicker.

So why don’t vegans eat gelatin? Because it’s made from ground up animal skin, bones, tendons and ligaments. Usually, that means pigs, but most kosher gelatin is made from fish parts.

To make gelatin, producers cut up animal parts into tiny pieces. Then, they use hot water to remove most of the fat and to cook the ground up bones, ligaments, skin and tendons.

The cooked meal sits in an acid or alkali bath for several days to release the collagen. Then, the bits of animal parts are boiled in superheated water, and the extra liquid is evaporated off, leaving solid chunks behind.

Those chunks get ground down to create the gelatin powder used to make Jello, gummy candy, marshmallows, etc.

Gelatin is a byproduct of the meat industry, like leather. Vegans and vegetarians don’t buy these products, because animals have to die to create them.

Luckily, you don’t need animal bones to enjoy a roasted marshmallow, thicken yogurt or even to make jello-like treats. Here are some vegan alternatives to gelatin and products that contain it.

Most often, cooks use gelatin in desserts, so the vegan alternatives below are generally not health foods. Jello and marshmallows are sometimes foods, whether they’re made from animal bones or seaweed.

This seaweed-derived ingredient gels like gelatin, but no animals are harmed to make it. To replace gelatin with agar agar in a recipe, you need to dissolve it in hot water first. Here’s how to firm up two cups of liquid with agar agar:

When it cools, you’ll have jello.

If you want to make a jello-style dessert, you can also just buy a box of vegan jello. If jello is what you’re going for, this is so easy. Just follow the package directions, and you’re good to go. We like making BaKol Jel Desserts in my house. They taste great, and you can often find them at regular grocery stores.

If you’re looking to make a jello salad, like the kind you ate at picnics as a kid, I’d recommend following a recipe. This one from Fried Dandelions and this from Spabettie (pictured above) are both great options for recreating those nostalgic desserts without the animal parts.

There are a few companies making vegan marshmallows and jelly candies now! Here are my favorite plant-based alternatives to gelatin sweets:

Do you have a favorite gummy treat that’s made with plant-based ingredients instead of gelatin? Share your favorites in the comments!