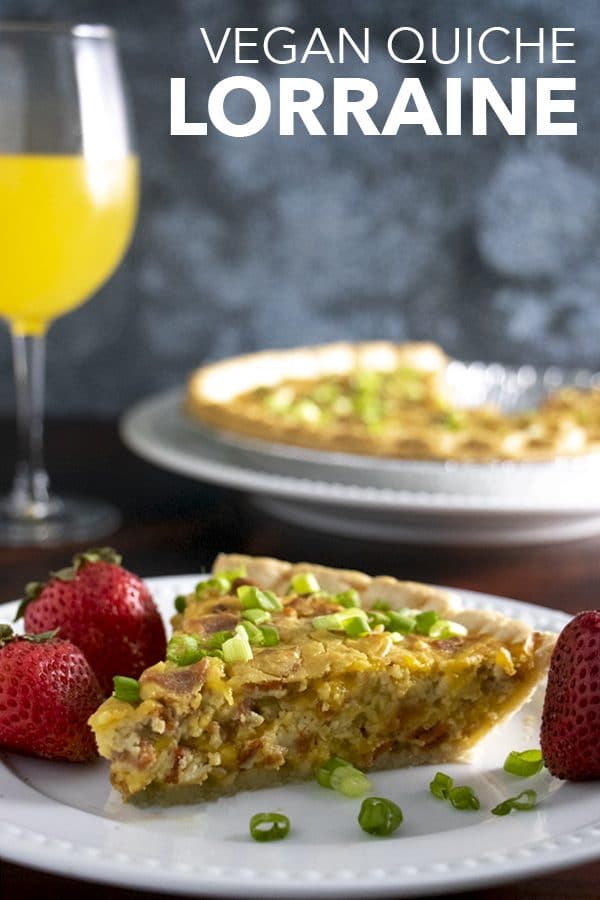 Vegan quiche Lorraine is rich, yet light and fluffy, and it's packed with plant-based bacon power!

Y'all, I am thrilled to share this Vegan Quiche Lorraine recipe as part of the blog tour for Leinana Two Moons's new vegan cookbook: Baconish. Baconish is a whole book dedicated to the different ways that you can make vegan bacon, and it did not disappoint!

There's a joke in the vegan community that vegans can make bacon out of anything, and this book proves that it's funny because it's true. Get the vegan quiche Lorraine recipe from Baconish below!

A Little Bit About Baconish

Baconish starts out with the basics: a little introduction about bacon and 14 different "Meet the Bacons" recipes.

I like that in the book's intro, she doesn't shy away from touching on our culture's obsession with bacon. In her introduction, she says, "I hope this book will interest everyone who loves bacon - and everyone who loves animals even more than they love bacon."

From there, she shares breakfast recipes, soups, salads, sandwiches, sides, main dishes, and even desserts packed with vegan bacon goodness.

The vegan quiche Lorraine recipe is from the breakfast chapter, and I'm so glad that I chose it to try first. It's pretty quick and easy, and the results are just delightful.

Want to check out some other recipes from the book? Here are a few other reviews of Baconish featuring different recipes:

Leinana has two kids, so she totally gets maybe not having time to cook everything from scratch. Whichever direction you go, I think you'll be really happy with this recipe and with Baconish!

This recipe truly couldn't be simpler. Start by grinding raw cashews to a cornmeal-like texture.

Then, just toss a few other ingredients into the blender, stir in cooked vegan bacon and vegan cheddar shreds, pour it all into a pie crust, and bake.

The total cooking time is about an hour and 20 minutes, but over an hour of that time is baking and cooling time. You can be doing other things while the quiche cooks and cools.

After you bake and cool your quiche, serve up slices with a sprinkle of fresh chives and prepare to be delighted.

Choosing a Pie Crust for Your Quiche Lorraine

If you don't want to make a pie crust from scratch, you totally don't have to. You also don't have to pony up for an expensive vegan pie crust.

Don't let that list intimidate you, though! There are plenty of accidentally vegan pie crusts at the grocery store. Start with the store brand crusts, because those tend to be animal product-free, in my experience. 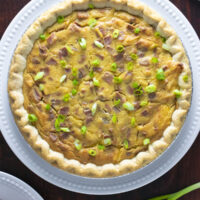 Calories: 300kcal
Tried this recipe? Share your photo!Mention @GlueAndGlitter on Instagram or Twitter!
« 10 Cheap Vegan Meals (all under $5 for 2 servings!)
Kid-Friendly Vegetables (and a Veggie Roast for Picky Eaters) »