Spicy-sweet Peach BBQ Hummus is perfect for dipping chips or your favorite veggies. Serve as finger food at a party or bring it tailgating on Game Day.

This BBQ hummus recipe uses bottled BBQ sauce and chickpeas as its base. You can start with 1 ½ cups of my homemade BBQ sauce, if you prefer homemade to store-bought. I won't judge you, either way.

To make your hummus, you literally just toss everything into the blender, and puree until you get the texture you like. Once you're done blending, adjust the flavors to your liking, and you're good to go.

Everyone has their own preference when it comes to the best sweet-to-heat ratio, so in the video, I show you how to adjust the flavor after that first round of blending.

How to Serve BBQ Hummus

Serve up your BBQ hummus with your favorite crackers or veggies for dipping. I picked up local cucumbers and yellow bell peppers, a bag of organic carrot chips, and rice crackers to dip.

You can dip whatever you want into this BBQ hummus, but my favorite by far was cucumber slices. Despite being oil free, this hummus has rich, deep flavors, and refreshing cucumber balances that out like a champ.

A Note About Vegan BBQ Sauce

You might be surprised to learn that not all BBQ sauces are vegan. The two main animal ingredients to look out for with BBQ sauce are honey and anchovies. Anchovies in BBQ sauce aren't all that common, but I've definitely seen them in there, so give those ingredients a read-through!

I've had good luck with store-brand BBQ sauces. They tend to use sugar for sweetness, instead of honey, because it's cheaper.

There are brand name BBQ sauces that are vegan, too, though, so just squint at some ingredients lists until you find one that looks good to you and is free from animal ingredients.

If you're having people over, you probably need more than one snack on the table. These are some other simple vegan snacks that I like to serve to guests:

But first, let's make some hummus, y'all! 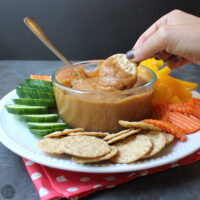