There is no artificial coconut flavoring in these fluffy, vegan coconut cupcakes, but they're still bursting with coconut flavor.

I whipped up these cupcakes by special request for my friend Jeanee's birthday. She asked me to bring cupcakes, and she said that coconut and chocolate were two of her favorite flavors. Vegan coconut cupcakes with chocolate frosting seemed like the obvious move. 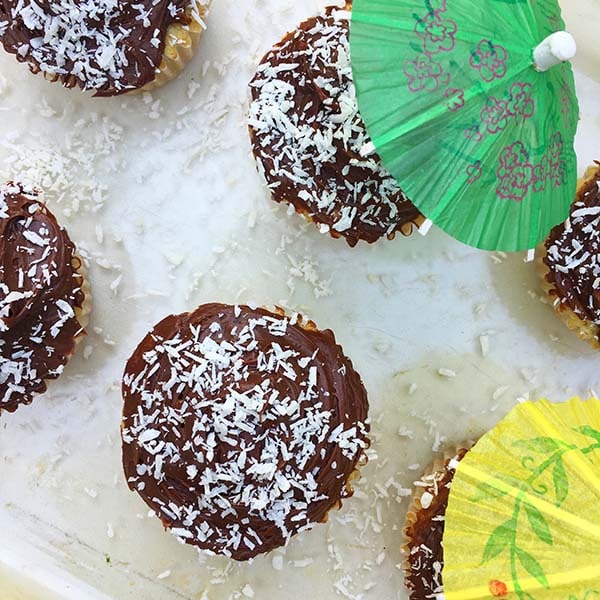 I didn't have any aquafaba on hand when I was making these, so I went back to Old Faithful: the Golden Vanilla cupcakes from Vegan Cupcakes Take Over the World, with some adjustments to up the coconuttiness.

Instead of soy milk, I used full fat coconut milk, and I replaced the margarine with coconut oil.

Y'all, these taste super coconutty, with no artificial coloring needed!

I frosted these with chocolate frosting  that was *cough*from-a-can*cough*, but if you want to be a purist and make your frosting from scratch, I recommend this recipe from The Misfit Baker. Starr's recipes are always on point.

The other experiment I tried on these cupcakes is something I learned from Go Dairy Free. Usually, when you make vegan "buttermilk" for baking, the directions say to mix the milk and acid first, then let it curdle.

Alisa says that you really don't have to do that, and y'all. It works! Forget waiting. I mixed up all of the wet ingredients for this together and saved myself waiting time and an extra bowl to wash. 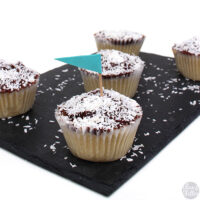 Fluffy Vegan Coconut Cupcakes were a total hit with my omnivore friends. One of my friends is allergic to chocolate, so she requested I leave one cupcake unfrosted for her. Even without frosting, she said it was rich and fluffy. YES!
Prevent your screen from going dark
Print Pin Rate
Course: Dessert
Cuisine: Vegan
Prep Time: 10 minutes
Cook Time: 20 minutes
Total Time: 30 minutes
Servings: 12
Calories: 259kcal
Author: Becky Striepe

*You can make these a few hours ahead or even the day before serving, but you want to frost just before serving. If you’re going to store them overnight, keep them in a covered container in the fridge. Recipe adapted from Vegan Cupcakes Take Over the World.