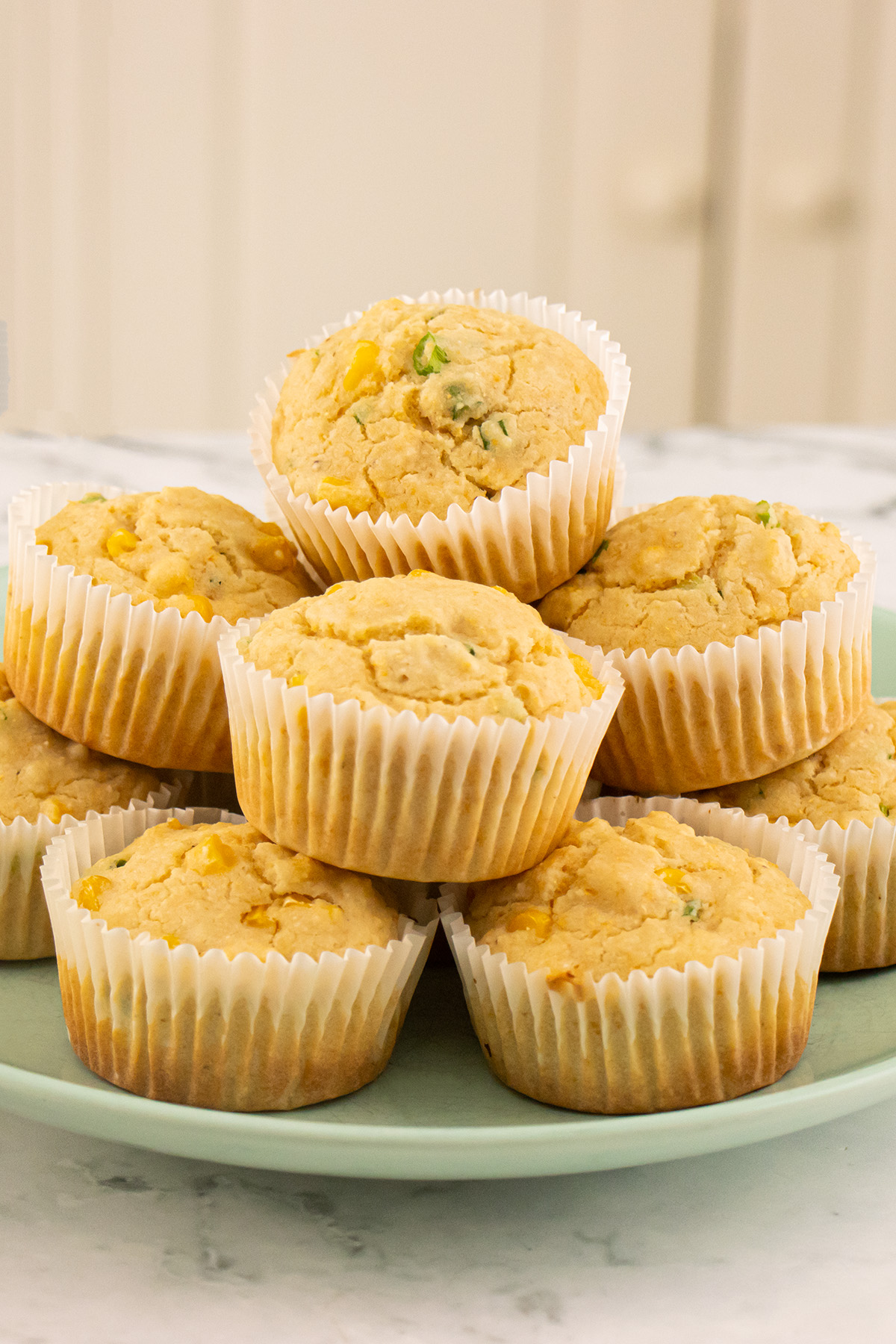 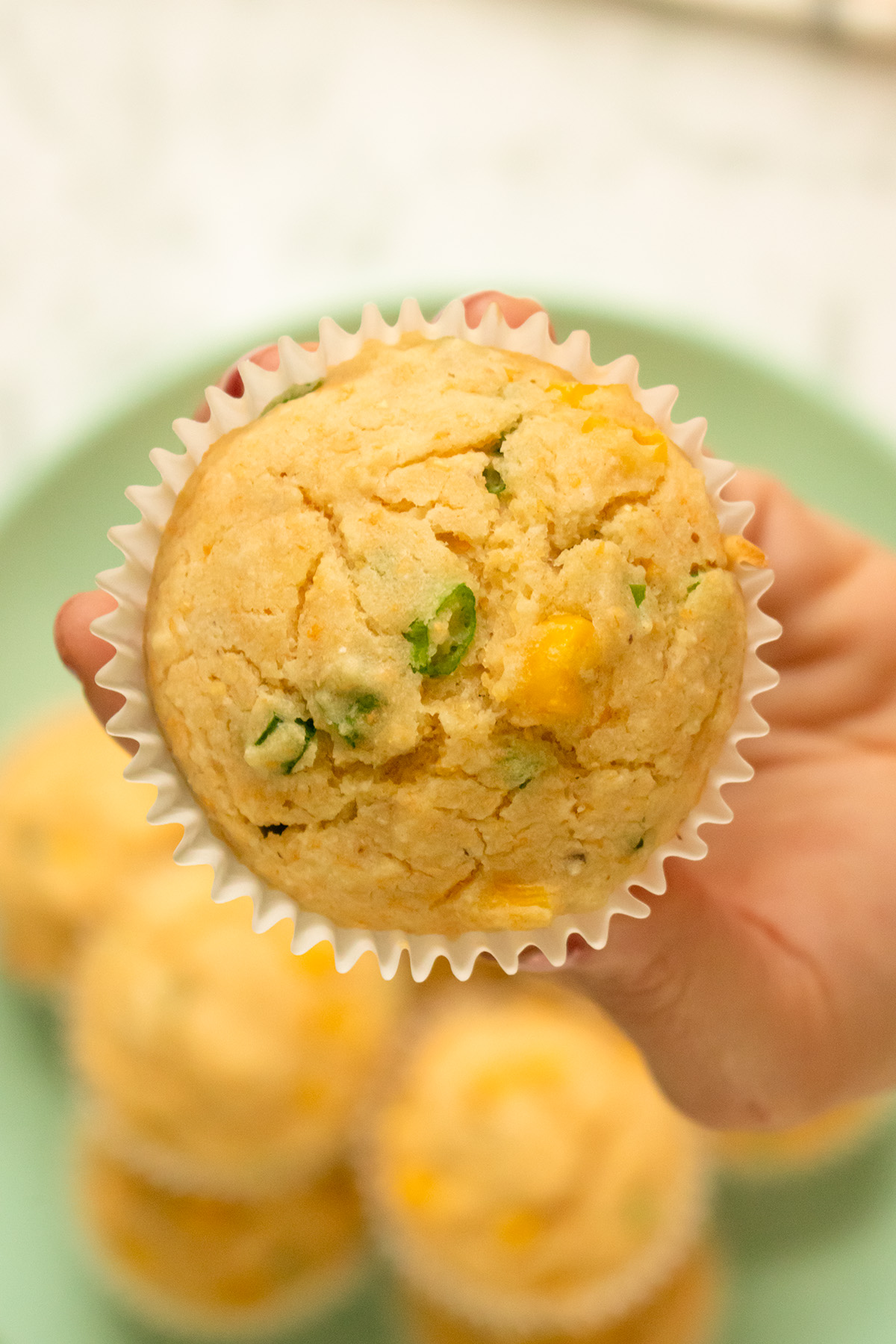 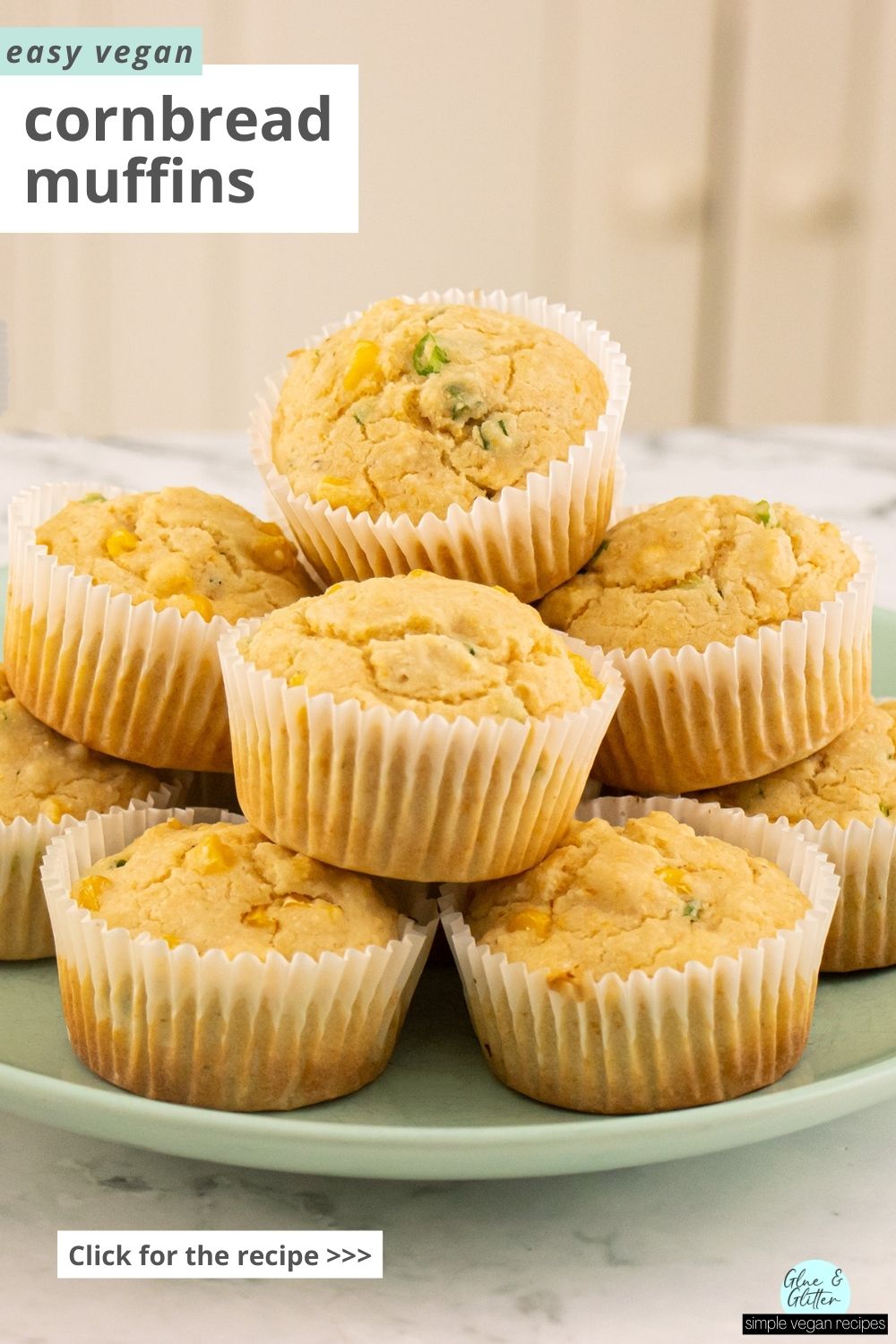 Vegan cornbread muffins are a hearty side perfect for pairing with chili, soup, or stew. These vegan corn muffins are addictive!

Start by preheating the oven and lining a muffin tin that holds 12 standard-size muffins.

A lot of baking recipes start with the dry ingredients, but here we begin with the wet. Grab a large bowl and mix together melted vegan butter, sugar, and aquafaba until the sugar dissolves.

Now, add the vegan milk, flour, cornmeal, baking powder, salt, and baking soda, mixing again until you have an even batter. Then, fold in the green onion and corn kernels.

Use a large spoon or an ice cream scoop to scoop the batter into your lined muffin tin. You want the cups filled just ¾ of the way. If you overfill, your muffins will spill over when they bake, because they rise quite a bit.

Bake them at 425° F for 16-19 minutes, until a toothpick inserted into the center of a muffin comes out clean.

Let the corn muffins cool in the pan for 10 minutes before removing them. They're actually still cooking as they cool, so don't skip this step!

Make sure that you're using fine white cornmeal. That will yield the best final texture.

Speaking of texture! Don't overmix the batter. Mixing too much can yield muffins that are dense.

The final key tip is to let your vegan cornbread muffins cool! They'll stick to the paper liners if you try to remove them before cooling.

What to serve with vegan cornbread muffins

I love these as a snack or a quick breakfast on their own, but they really shine with a hearty soup or stew to dip them in. Try serving vegan corn muffins with:

How to store vegan corn muffins

Store fully cooled, vegan corn muffins in an airtight container lined with paper towel. They will keep for 2-4 days in the pantry.

You can also freeze these! Wrap the cooled muffins individually in plastic wrap, and freeze in a freezer-safe container. They will keep for up to three months.

Thaw on the counter top or in the refrigerator. If you like, you can warm them in the toaster or oven at 350° F for five to ten minutes.

Store fully cooled corn muffins in an airtight container lined with paper towel. They will keep for 2-4 days in the pantry. To make this into a loaf of vegan cornbread instead, grease a loaf pan, pour the batter in, and bake for approx. 15-20 minutes, until a toothpick inserted comes out clean.

Why is cornbread not vegan?

Traditional cornbread is made with eggs, dairy butter, and milk, which are animal products. Some corn muffin recipes use lard as the fat, which isn't vegetarian, either.

What can I use in place of an egg in cornbread?

Aquafaba (the liquid from canned beans) makes a great egg replacer! Use 3 tablespoons per egg. You can also use a tablespoon of flax meal mixed with 3 tablespoons of water in place of an egg in baking recipes, like cornbread.

Can I use whole wheat flour?

Can I oil the muffin pan instead of lining it?

I wouldn't. The liners make it much easier to pop the cooked muffins out.

Can I make this batter in advance?

You can, though the muffins may not rise as well if you make the batter ahead. I'd recommend baking them in advance, since they store well for up to three or four days.